The celestial body with the greatest potential for life in the solar system may not be Mars after all. Europa, one of Jupiter's moons, is believed to have an ocean just beneath its frozen crust -- and some scientists think it may have just the right ingredients for life.

Now, NASA is getting ready to send a spacecraft there to find out more.

"We know that on Earth, everywhere that there's water, we find life," Robert Pappalardo, Europa Mission project scientist, said in a video released by the space agency. "So could Europa have the ingredients to support life?"

Pappalardo also wrote a blog post about the Europa mission last month for The Huffington Post. "Finding life elsewhere would end our cosmic isolation: if there is life in our own planetary backyard, then life is probably common throughout the universe," he wrote at the time.

Europa is one of the four largest moons of Jupiter, which were discovered by Galileo in 1610. Along with its icy crust and the possible ocean beneath, the moon is known for the red streaks across its surface.

"There is too much evidence right now lying around on the surface -- the red stuff -- that suggests that something's going on there," Claudia Alexander, who was mission project manager of the Galileo spacecraft, which circled Jupiter and its moons in the 1990s, said in the clip. "Is that an environment that is habitable for any sort of life form? By golly, we really have got to go back and figure that out."

The potential mission to Europa passed its first major review last week, and is now headed toward a phase of development called formulation. If everything goes according to plan, the spacecraft will launch in the 2020s for a journey that will take several years.

Once it arrives, the spacecraft will orbit Jupiter rather than the moon itself.

"Europa is bathed in radiation from Jupiter," Pappalardo said. "Any mission that goes in the vicinity of Europa is cooked pretty quickly."

To prevent that from happening, the spacecraft will orbit Jupiter, make close flybys of Europa, then quickly leave that radioactive hot zone. It would repeat the process about every two weeks.

NASA said the mission plans will allow for at least 45 flybys of Europa -- at times getting within 16 miles of its icy crust. During each flyby, the instruments on board the craft will wake up to take photographs and other readings.

The selected payload includes cameras and spectrometers to produce high-resolution images of Europa's surface and determine its composition. An ice penetrating radar will determine the thickness of the moon's icy shell and search for subsurface lakes similar to those beneath Antarctica's ice sheet. The mission will also carry a magnetometer to measure the strength and direction of the moon's magnetic field, which will allow scientists to determine the depth and salinity of its ocean.

In 2012, the Hubble Space Telescope spotted what appeared to be giant plumes of water erupting from the surface of Europa. Those plumes have not been seen since. However, if they occur again, the spacecraft would be able to fly through the water vapor and take samples.

“Today we’re taking an exciting step from concept to mission, in our quest to find signs of life beyond Earth,” John Grunsfeld, associate administrator for NASA’s Science Mission Directorate, said in a news release. “Observations of Europa have provided us with tantalizing clues over the last two decades, and the time has come to seek answers to one of humanity’s most profound questions.”

NASA Preps Mission To Search For Life On Europa, One Of Jupiter's Moons
Jupiter Images By NASA 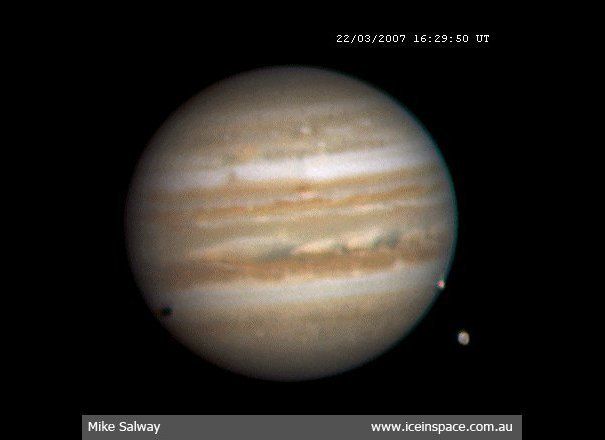