If you've ever wanted to see a real-life "flying saucer," here's your chance.

NASA is planning to test-launch a new saucer-shaped spacecraft from the Hawaiian island of Kauai.

The craft, dubbed the Low Density Supersonic Decelerator (LDSD), is designed to allow large payloads to land safely and in a controlled manner (read: not crash) on other planets, bringing us one step closer to landing humans on Mars. 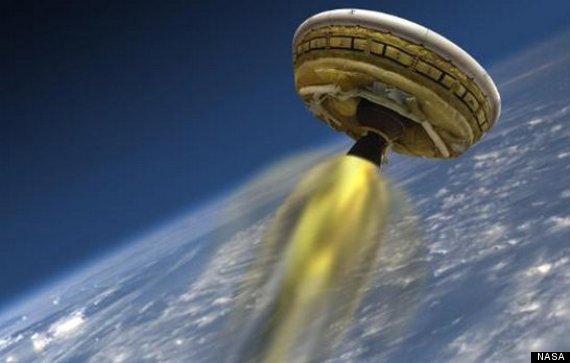 This artist's concept shows the test vehicle for NASA's Low-Density Supersonic Decelerator (LDSD), designed to test landing technologies for future Mars missions. A balloon will lift the vehicle to high altitudes, where a rocket will take it even higher, to the top of the stratosphere, at several times the speed of sound.

Bad weather prevented the launch on previous occasions. Now the launch is set for June 7 -- and if that doesn't work out, NASA will try again on June 9, 11, or 14.

“After years of imagination, engineering and hard work, we soon will get to see our keiki o ka honua, our ‘boy from Earth,’ show us its stuff,” Mark Adler, project manager for the LDSD at NASA’s Jet Propulsion Laboratory in Pasadena, California, said in a written statement. "The success of this experimental test flight will be measured by the success of the test vehicle to launch and fly its flight profile as advertised. If our flying saucer hits its speed and altitude targets, it will be a great day."

The game plan is for an enormous helium balloon to lift the LDSD almost 23 miles into the sky from the U.S. Navy’s Pacific Missile Range Facility on Kauai. At that point, the LDSD will uncouple from the balloon. Four small motors will stabilize the device, and a larger rocket engine will then propel the LDSD further into the stratosphere.

At such a high altitude, Earth's atmosphere will mimic what a spacecraft would encounter when entering the Martian atmosphere.

As the landing system descends, it will use some pretty nifty braking systems: an “inflatable doughnut”-like apparatus that will surround it like a cushion and slow it down, and the “world's largest supersonic parachute” ever flown.

"By the time it splashes into the Pacific, it'll be going a few miles an hour," LDSD project principal investigator Ian Clark told Hawaii News Now.

The launch will be streamed live online.

The decision whether to proceed with the launch will be made the day before each date.