When you try to determine what is important to someone, it is useful to pay attention to how that person spends their time and their money. Someone who talks endlessly about how passionately they feel about getting involved in a certain cause, but never puts any time or money into it is just talking. Someone who dedicates a considerable amount of their time or money to a certain cause is investing in what they believe is important, whether or not they advertise that to the world or not.

Governments are similar. The priorities of a government can be seen in its budgets, not in politician's visionary speeches. As the space shuttle Enterprise moves to New York for its retirement party, many people talked about the demise of the American space program. While there are some free enterprise endeavors set to take very wealthy people out to space, these efforts are miniscule compared to the project that brought humans to the moon. At the time, America was racing with the Soviets to prove superiority and President Kennedy's famous challenge "before this decade is out, of landing a man on the Moon and returning him safely to the Earth." This statement has become a textbook example of leadership. Kennedy defined a clear and measurable goal then rallied support to make this moon landing (and safe return) a possibility.

As you can see from the graph below, NASA funding was a substantial part of the federal budget. There was a burst of funding and scientific activity in the 1960's, leading up to the 1969 moon landing and then funding dried up. Landing on the moon was no longer a priority and further space exploration, whether it be to Mars or other planets required a far greater investment. 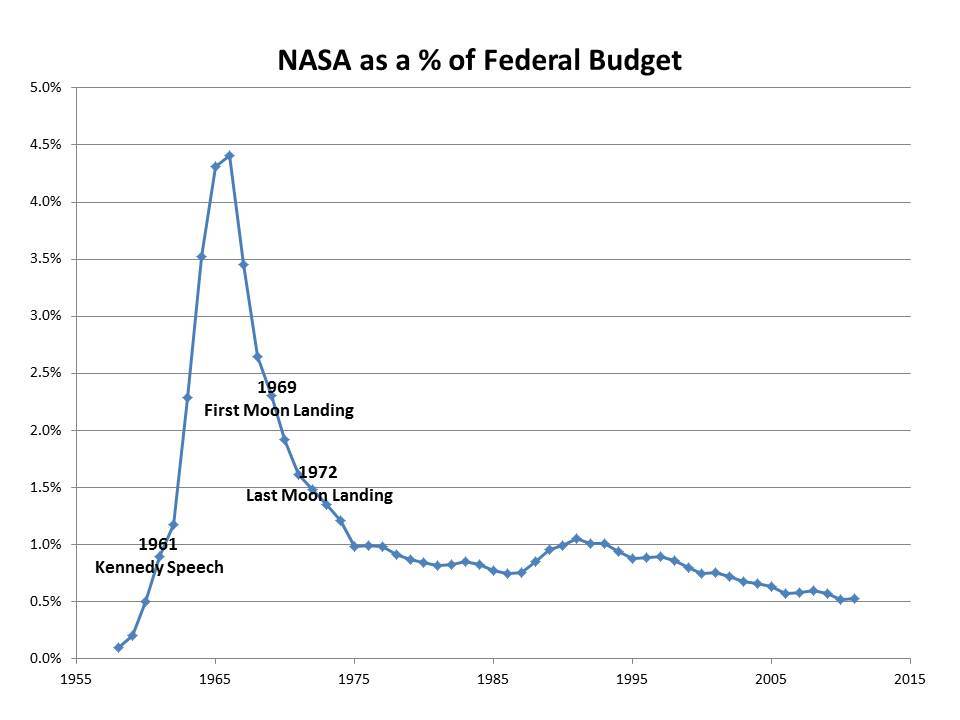 Here we are in 2012. We heard George Bush talk about a mission to Mars but no money was provided. Meanwhile, China and India plan to send missions to the Moon in the next few years while the Russians talk about landing people on the moon. The Google Lunar X Prize is trying to stimulate the private sector to get involved but these efforts pale in comparison to the scale of effort needed to get there.

The landing on the moon in 1969 was one of humanity's greatest accomplishments so far. History may judge the United States well on some issues and poorly on others, but it will always note that America landed humans on the moon first. I recently attended a lecture at the Museum of Natural History where one of their astronomers lamented that the United States has squandered the last 40 years that it could have invested in space exploration. The speaker went on to contrast the United States' short term focus on landing on the moon with the long-term plans that the Chinese have for space exploration. He envisioned in the next 10 years America waking up to a panic, much like it did when Sputnik was launched, but that America would not be able to catch up to China's space technology in the same way that a decade of major investment pushed America past the Russian efforts in the 1960's.

As a country, we made a choice. For the past four decades, America's budget made it clear that space was not a top priority. As we think of America over the span of centuries and not from budget cycle to budget cycle, will we look back and ask ourselves whether the decision to abandon space was a wise decision? Or will historians look back and identify this decision as a textbook example of when America sacrificed long-term strategic goals for short-term interests?