When the $9 billion James Webb Space Telescope is launched in 2018, after two decades of planning and construction, it will bring the deepest and farthest reaches of the physical universe much closer to observers on Earth than anything previously could.

In fact, it will take astronomers all the way back in time to the beginning of the physical universe.

Named after former NASA administrator James Webb, this next-generation telescope ― generally referred to as JWST or Webb ― “will study every phase in the history of our universe, ranging from the first luminous glows after the Big Bang, to watching galaxies collide, to the formation of solar systems capable of supporting life on planets like Earth,” according to a NASA statement.

“We are opening up a whole new territory of astronomy. We will see things that we’ve never been able to see before because this telescope is much more powerful than even the great Hubble Telescope,” Nobel prize-winning NASA astrophysicist John Mather said in a statement.

But wait! What about the Hubble Telescope? Is it being junked or put out to very deep space pasture?

After nearly three decades of photographing incredible outer space imagery, Hubble will continue that job, remaining near Earth. While Webb will be a much more powerful outer space observatory, it will not be close to Earth, where ― as history has shown us ― Hubble has required humans to make “on-site” repairs to keep it functioning.

No, Webb will be on its own, in an orbit around the sun.

Here’s an illustration of the size difference between Hubble and Webb’s imaging mirrors:

Webb’s primary mirror is made up of 18 hexagonal mirrors that look like a huge piece of a puzzle. These will unfold and take their permanent shape after the telescope is launched and assumes its solar orbit.

It’s easy to appreciate Webb’s size in this image showing team members standing in front of a full-scale Webb model at the Goddard Space Flight Center in Greenbelt, Maryland:

The spectacular images expected back from Webb will be like nothing else scientists have ever seen before ― big or small.

And, according to Mather, “If you were a bumblebee, hovering out at the distance of the moon, we would be able to see you.” 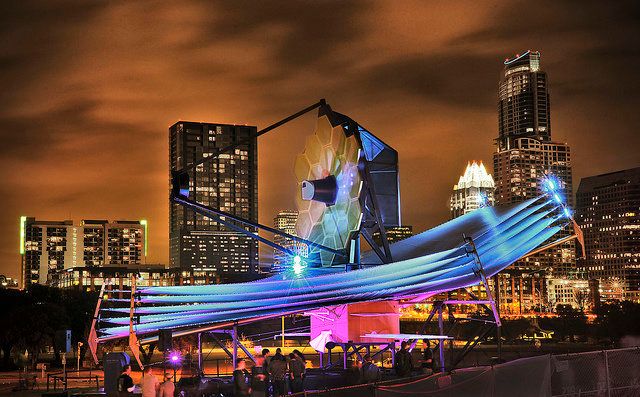