NASA is launching a dramatic mission to bomb the moon.

The LCROSS (Lunar CRater Observing and Sensing Satellite) mission will send a missile traveling at twice the speed of a bullet to blast a hole in the lunar surface near the moon's South pole.

Scientists expect the impact of the Centaur rocket to be powerful enough to eject a huge plume of debris from the moon. The moon dust should even be large enough to be seen from earth through telescopes 10-to-12 inches and larger, says NASA.

So what's our beef with the moon?

The bombing isn't an act of hostility: it's all part of our search for water in space.

The missile will impact the lunar surface at crater Cabeus A (see photo below). The crater is located on the moon's South pole, an area in which scientists estimate there may be billions of tons of trapped ice. 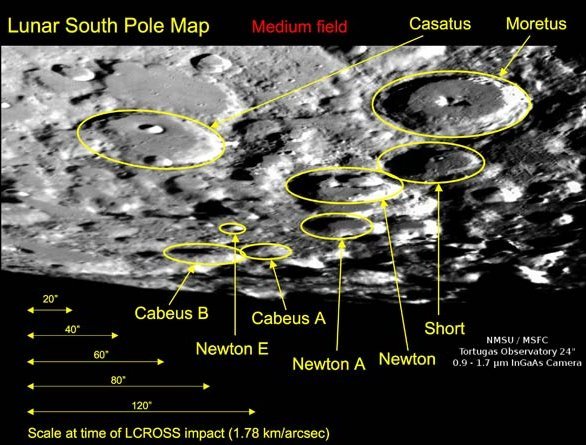 Scientists intend to examine the debris from the blast for traces of water ice or vapor. Discover Magazine explains how it works:

Detecting that water is tough. Radar results have been inconclusive, with some people saying there's lots of water, and others saying there's none at all. By impacting a probe there, any ice located at the impact site will be shot up above the lunar surface, where sunlight will break it up into O+ and OH- molecules, which can be detected. Thus, LCROSS.

Locating water on the moon would be a big boon for future space missions, NASA notes:

Transporting water and other goods from Earth to the moon's surface is expensive. Finding natural resources, such as water ice, on the moon could help expedite lunar exploration.

Check out an awesome video simulation of the LCROSS mission here.