The NASA spacecraft has arrived at the Kennedy Space Center, the solar panels have been attached, and preparations are almost complete. After a few final tests, America's space agency will be set for the Nov. 18 launch of its next mission to the red planet.

Unlike NASA's other recent missions to Mars -- Opportunity and Curiosity -- the Mars Atmosphere and Volatile Evolution (MAVEN) spacecraft will orbit the planet instead of landing on its surface. The craft, which is tasked with analyzing the Martian atmosphere, is scheduled to reach Mars by September 2014.

"The MAVEN mission is a significant step toward unraveling the planetary puzzle about Mars' past and present environments," NASA's John Grunsfeld said in a written statement. 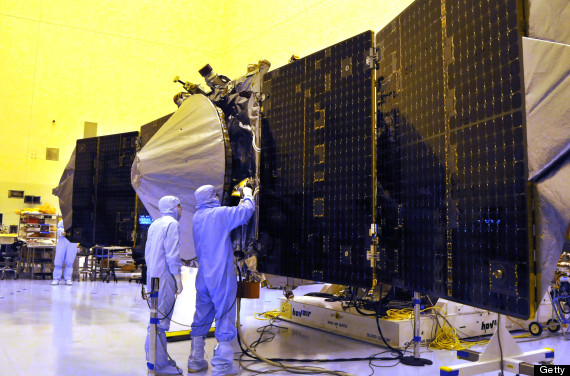 By orbiting the planet at various latitudes, the spacecraft will explore Mars' upper atmosphere. NASA scientists expect the data to yield insights into how the Martian climate changed over time. The key question: Why did Mars lose its atmosphere?

Research published earlier this year indicated that most of Mars' carbon dioxide-based atmosphere may have escaped billions of years ago. But a recent meteorite study suggests that most of this carbon dioxide actually became trapped inside Martian rocks.

India intends to launch its own Mars orbiter in early November. If all goes according to plan, India's space agency may collaborate with NASA to explore the planet's atmosphere, Dr. Bruce Jakosky, MAVEN's principal investigator and a professor of geology at the University of Colorado, told Universe Today.