NASA and the U.S. military will launch a record payload of 29 satellites from a Virginia spaceport Tuesday night (Nov. 19) on a mission that could create a spectacular sight for skywatchers along the U.S. East Coast, weather permitting.

The nighttime launch could light up the sky for millions of observers along a wide swath of the Eastern Seaboard, and could be visible from just northeastern Canada and Maine to Florida, and from as far inland as Michigan, Indiana and Kentucky, depending on local weather conditions, according to NASA and Orbital Sciences visibility maps. [Can You See It? Visibility Maps for Nov. 19 Rocket Launch (Gallery)]

One launch, many satellites 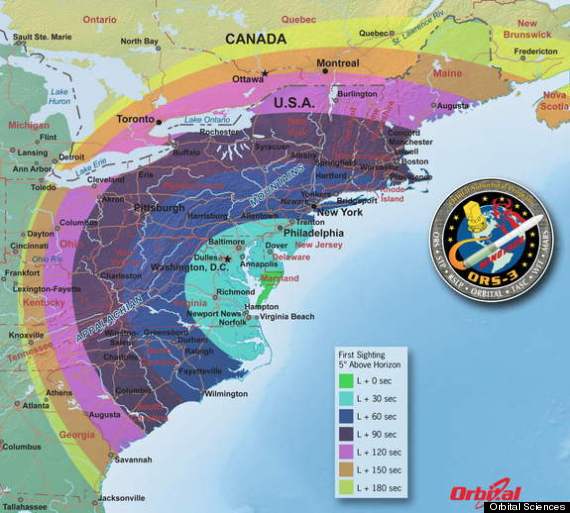 Specifically, the mission will be to launch STPSat 3, a host spacecraft for five experiments and sensors to measure the space environment. Employing such capabilities on future space missions could reduce costs and the time required to prepare rockets for launch.

Another 28 CubeSats are housed inside "wafers" designed to deploy from the Minotaur upper stage once it reaches its 310-mile (500 kilometers) orbit. The satellites are enclosed inside the Minotaur's protective nose cone fairing, which is flying in the 61-inch diameter configuration for this launch.

Over the years, similar rocket launches have routinely taken place from California's Vandenberg Air Force Base. While many West Coast residents may be quite familiar with such launch sightings, they are somewhat unusual in the East (though they have become more common in recent years). Still, Tuesday evening's launch may end up surprising millions of people if it goes off as planned.

Visibility maps from Orbital Sciences shows the likely ranges of visibility for Tuesday night's launch, including details on how high in the sky it will appear and how many seconds will elapse before the rocket first becomes visible above the horizon.

The four-stage Minotaur 1 rocket will be launched on a southeast trajectory and should be visible, depending on cloud cover and one's viewing location, from northern Maine and southern Quebec province to coastal Georgia.

The launch of a Minotaur I rocket for the U.S. Air Force ORS-3 mission is scheduled to occur on November 19, 2013, with a planned launch window of 7:30 - 9:15 pm EST. This map shows where the launch should be visible.


It may also be seen as far west as eastern Kentucky. The Stage 3 cutoff will take place at a distance of approximately 300 miles (482 km) downrange from Wallops Island. That works out to a potential viewing radius of up to 1,000 miles (1,600 km). [See Dazzling Photos from a Minotaur 1 Rocket Launch]

Those who witnessed the launch of Orbital Sciences' first Minotaur 5 rocket launch on Sept. 6 that propelled NASA's LADEE spacecraft toward the moon should see basically the same sight: A light in the sky similar to a very bright star shining with a yellow-white tinge. It may also seem that the rocket dips back to Earth as it moves farther away from the observer — just as a ship appears to sink as it moves out to sea — but actually the rocket is going higher, faster and farther from populated areas.

Editor's note: If you snap an amazing photo of Tuesday night's launch, or any other night sky view, and you'd like to share it for a possible story or image gallery, please send images and comments to managing editor Tariq Malik at spacephotos@space.com.

A bonus with the upcoming flight is that the rocket will appear to climb to a noticeably higher altitude in the sky compared to the LADEE mission. 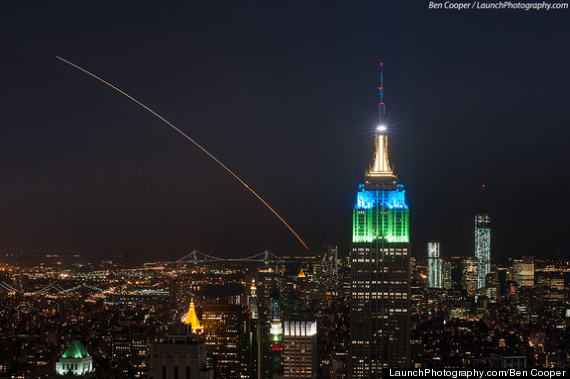 For example: From the New York City metropolitan area, September's LADEE launch only reached an altitude of about 10 degrees above the horizon (the equivalent of your clenched fist held at arm's length). In the case of Tuesday's launch, the Minotaur 1 is expected to climb to an altitude of 15 to 20 degrees.

The key to making a sighting is to have a clear, unobstructed view of the horizon in the direction of Wallops Island. For example, a viewer in Raleigh, N.C., should look toward the northeast; in Providence, R.I., you should face southwest; in Pittsburgh, Pa., it'll be in the southeast. 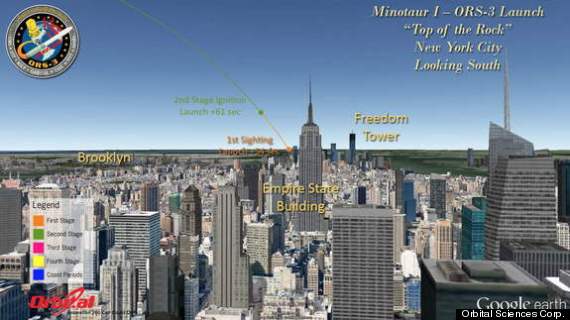 This image shows how observers in New York City at the "Top of the Rock" in Rockefeller Center can see the launch of ORS-3 planned for Nov. 19, 2013.

Prior to the very first Minotaur launch from Wallops Island in December 2006, Jay Pittman, Chief of the Wallops Range and Management office noted: "This vehicle has spent most of its life in the nation's defense, and the level of confidence we have in this vehicle is quite high; It is something that has flown many, many times."

Indeed, this attempt will be the 25th overall launch of the Minotaur family of rockets and the sixth Minotaur launch from the Wallops Flight Facility.

Android users have the option of downloading the new “What’s Up at Wallops” app, which contains information on the launch as well as a compass showing the precise direction for launch viewing. The app is available for download at: http://go.nasa.gov/17veCYT. For Launch updates call: (757) 824-2050.

SPACE.com partner Spaceflight Now is also providing blow-by-blow coverage of the ORS-3 mission via the Mission Status Center, which will also include a launch webcast feed.

Joe Rao serves as an instructor and guest lecturer at New York's Hayden Planetarium. He writes about astronomy for Natural History magazine, the Farmer's Almanac and other publications, and he is also an on-camera meteorologist for News 12 Westchester, N.Y. Follow us @Spacedotcom, Facebook and Google+. Original article on SPACE.com.