Galaxy Quest -- a wildly popular science-fiction parody made in 1999 spoofing the realm made famous by Gene Roddenberry's Star Trek TV series -- is considered a cult classic. Many fans pay homage by adorning themselves in space and/or superhero costumes at Comic-Cons throughout the United States and around the world.

One of my favorite tag lines in the movie is the one nasally and robotically uttered by Mathesar, the outwardly human -- but inwardly octopoidal -- leader of the Thermians. I can hear him even now: "Never give up, never surrender!" It is a line that has significant meaning to me, a now-retired, 15-year veteran astronaut.

Why significant? The answer, along with my story, is simple. I applied with NASA to become an astronaut 15 times. That's right, 15 times. Once per year, for 15 years, I dutifully submitted all of my application information to the governmental monolith I revered, only to be rejected by a few choice words on a small, white, NASA-addressed postcard. Kicked to the curb 14 of those 15 years, I was finally selected in 1998. I felt like the epitome of "never give up, never surrender."

It's time for America to do the same with her space program. It is time for all of us to step up and proclaim that we will "never give up and never surrender" our pre-eminence in space leadership. It is time for us to contact our representatives and voice our opinions that NASA is worth it. Yes, there are naysayers out there; people who believe that NASA is its own intergalactic "collapsing star," where U.S. tax dollars disappear like rays of light into a black hole's event horizon, with little to no visible benefits.

There is nothing further from the truth. When you use your cell phone to tweet about how NASA wastes money, you can do so because of NASA technology. After a natural disaster, while you're wondering when the government will provide financial assistance as you re-assemble your fence, you are probably using portable power tools, technology developed by NASA in the 1970s, as we conquered the moon. There are many more examples. The Apollo Program alone provided U.S. taxpayers with a return on investment that has been estimated to range from seven to 20 dollars per $1 invested! Is there anyone today that wouldn't take that share?

The technological benefits resulting from our investment in NASA and her programs don't just show up in Walmart, Target and Costco overnight. These things take time -- and, as a whole, we Americans are impatient -- we want it now! We should follow the sage advice of Yoda and Obi Wan, who were so fond of telling Luke Skywalker, "Patience, my young Jedi."

As we watch our leaders in Congress, debating bills that threaten NASA budgets, we too must be patient. But while we watch what is going on within the Beltway, we can pick up our NASA technology-enabled smart phones, laptops and tablets and send them our thoughts (over Al Gore's internet) regarding America's Space Program. Tell them, "Never give up, never surrender."

I'm not out to save the world. I just want to save NASA... a little bit at a time. 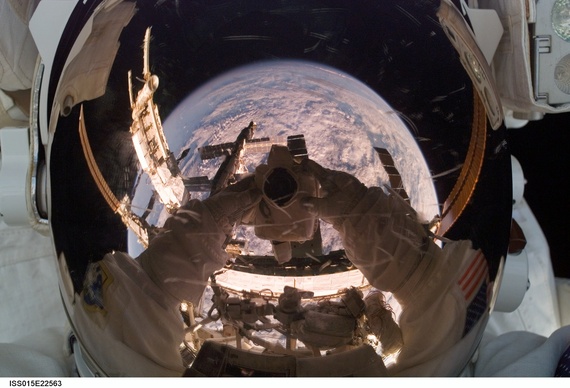