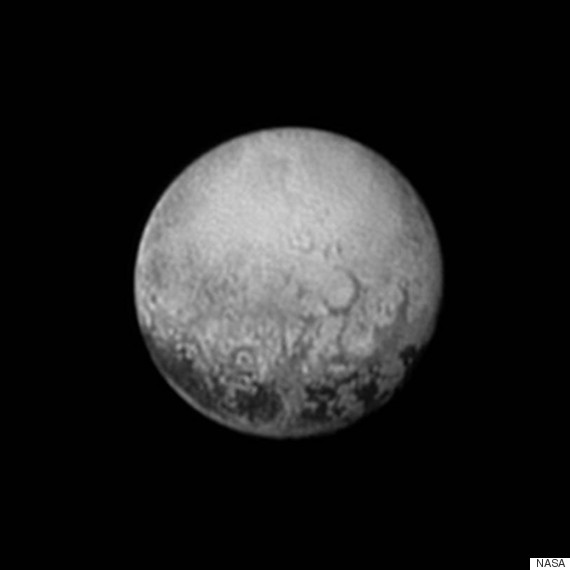 On Saturday, NASA released a stunning photo of Pluto captured by the New Horizons spacecraft. The image is the clearest view many of us will ever get of the four dark spots that have captivated stargazers and scientists since they were first seen in late June.

The spots, which are being called Pluto's "brass knuckles," lie on the far side of the icy dwarf planet. The region will be rotated away from the New Horizons' cameras when the spacecraft has its close-range flyby on Tuesday. The image above gives "the last, best look that anyone will have of Pluto’s far side for decades to come," said Alan Stern, the principal investigator for the mission.

The dark areas, all of which are about 300 miles in diameter, have intrigued scientists eager to know what they are and why they're so evenly spaced. “It’s a real puzzle -- we don’t know what the spots are, and we can’t wait to find out,” Stern said in a statement earlier this month.

“We can’t tell whether they’re plateaus or plains, or whether they’re brightness variations on a completely smooth surface,” said Jeff Moore, a scientist with NASA’s Ames Research Center, in the announcement.

Tomorrow morning, we'll be at #Pluto! :-) Where will you be? Watch live coverage on @NASA TV: http://t.co/aodVybyxS8 pic.twitter.com/GEkoD01zcb

New Horizons will fly within 7,800 miles of Pluto on July 14 at 7:49 a.m. EDT. During that time, the spacecraft will be in full view of the heart-shaped formation that made waves across the web last week.