American Catherine Coleman and Italian Paolo Nespoli pried off the lid of the robot's packing box, as though they were opening a coffin. TV cameras showed lots of foam inside, but no robot.

"It's like unearthing a mummy," radioed a payload controller at Marshall Space Flight Center in Huntsville, Ala.

"Well, at least the mummy would be here," Coleman replied. "We just have an empty box where Robonaut is supposed to be."

Robonaut – also known as R2 – was spotted a minute later in front of a work station.

"I'd like to introduce you to the newest member of our crew," Coleman said. "We're going to see what Robonaut can do."

The payload controller asked if R2 was related to HAL, the sinister computer with artificial intelligence from the 1968 film "2001: A Space Odyssey."

"Since we found him already controlling the space station, we're sure that he is related to HAL. But we'll see," Coleman said.

In a Twitter update, R2 announced: "Check me out. I'm in space!" A NASA employee on the ground posted the tweet.

Nespoli attached NASA's waist-high R2 to a fixed pedestal, where it will remain with its fists clenched and its arms folded against its chest until testing begins in May. The robotic team at Johnson Space Center in Houston wants to see how R2 performs in weightlessness. The robot is intended as an astronaut helper, inside the space station, in the decade ahead.

Legs should arrive next year.

View a photo of R2 in-orbit, unboxed and waiting for testing (below). 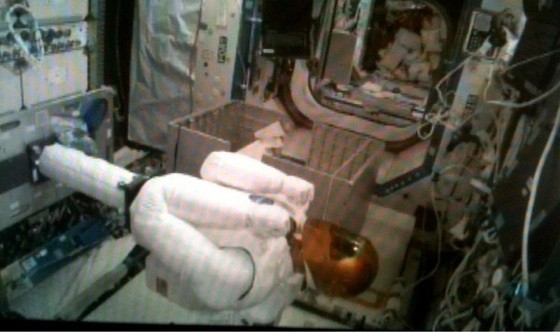