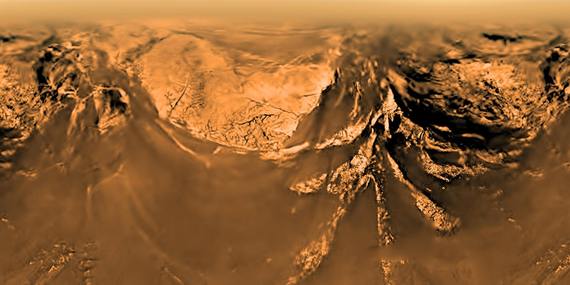 Titan, the largest of Saturn's many moons, is one of the most fascinating bodies in the solar system, and scientists think there could be some sort of strange life living in the moon's liquid methane lakes. Now, NASA has shared an absolutely amazing video of this alien world, taken from a probe as it landed on Titan's surface.

The probe, Huygens, landed on Titan back in 2005. Huygens, which was named after Titan's discoverer, Christiaan Huygens, separated from NASA's Cassini spacecraft on Christmas Eve in 2004 and entered the moon's atmosphere 20 days later. As the probe began its descent, it passed through Titan's thick atmosphere, revealing a stunning landscape underneath.

"The Huygens images were everything our images from orbit were not," said Carolyn Porco, the leader of the Cassini imaging team.

Instead of hazy, sinuous features that we could only guess were streams and drainage channels, here was incontrovertible evidence that at some point in Titan's history -- and perhaps even now -- there were flowing liquid hydrocarbons on the surface. Huygens' images became a Rosetta stone for helping us interpret our subsequent findings on Titan.

On its way down, Huygens sampled the atmosphere and took hundreds of pictures, the last few of which even showed the shadow of the probe's parachute as it floated down on Huygens after it landed. The probe, which was created by the European Space Agency, still holds the record for being the most distant landing of any craft that mankind has ever achieved.

NASA and the ESA, which worked together on the Cassini-Huygens mission alongside the Italian Space Agency, are highlighting Huygens 12-year-old landing with this astounding video because Cassini's own mission will soon draw to a close. After two decades in space, Cassini has begun its final series of orbits grazing the Saturn's rings. On September 15, Cassini will dive into the gas giant's atmosphere, and that will be the end. One can only imagine, for now, what Cassini will see, but you can check out Huygens's view of Titan in the video above.