A new era of space exploration — supported by a history-making new mega-rocket and a spacecraft designed to deliver humans into deep space — could be on the horizon for NASA.

The space agency is gearing up to build the largest and most powerful rocket in history. The huge launcher, called the Space Launch System (SLS), will move a new spacecraft dubbed Orion, designed to send up to four astronauts farther into the solar system than ever before. A short list of destinations includes the moon, nearby asteroids and, eventually, Mars.

Everyone is looking forward to 2021, the year when the first manned launch will occur. But before that happens, the rocket and spacecraft will have to pass a number of tests. [NASA's Space Launch System Rocket in Pictures]

Most powerful rocket ever

For its power, the SLS will rely on two solid rocket boosters in addition to the huge, 200-foot-tall (61 meters) core stage, which will carry liquid hydrogen and oxygen to fuel four RS-25 engines. The RS-25 rocket engine is a workhorse: It powered the space shuttle and "operated with 100-percent mission success during 135 space shuttle missions," according to a NASA statement.

The power produced by the three engines is equal to that from 12 Hoover Dams. NASA currently has a stockpile of 16 RS-25 engines at the Stennis Space Center, in Mississippi.

The engines themselves had to be modified to put out more power than they did for the space shuttle missions, and therefore still require testing. Those tests will probably occur in mid-July, NASA has said. 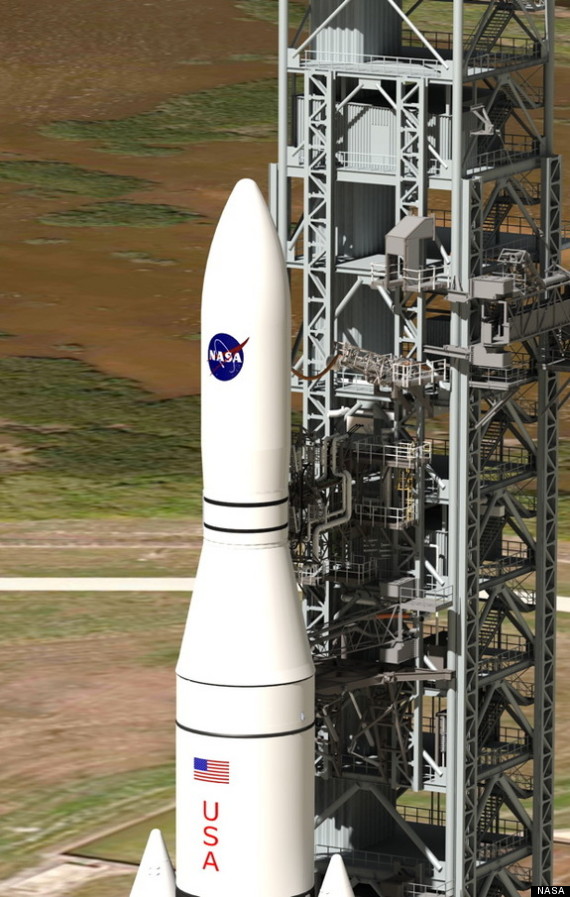 This artist concept shows NASA's Space Launch System, or SLS, which offers numerous benefits for scientific missions, from larger spacecraft mass to reduced travel time through the solar system in route to other worlds.

Earlier this month, a piece of the rocket passed a crucial preliminary test. The test verified that the stand's pipe system could handle the ultracold liquid oxygen and hydrogen that will flow through these parts during the hot test this summer.

As for the five-segment booster rockets, they are being built by ATK Aerospace. This company has successfully performed demonstration firings of the rockets and is scheduled to perform the first qualification motor test in late 2014 or early 2015.

The core stage is also on schedule. It will be built in the Michoud Assembly Facility in New Orleans, which is managed by the Marshall Space Flight Center. Because the core stage will be so large, special tools had to be developed to build it. Construction will require six enormous welding machines; the largest, called the Vertical Assembly Center (VAC), will stand 170 feet tall (51.8 m) and measure 78 feet wide (23.7 m).

Intended to join domes, rings and barrels to form fuel tanks and "dry structure assemblies," the VAC will be one of the largest welding tools in the world. The VAC is on track to be completed at the end of this month.

The SLS news is responsible for only half of the space-related excitement. At the end of this year, an unmanned Orion will get a boost into space from a Delta IV Heavy rocket. During its four-hour trip, titled "Exploration Flight Test-1," Orion will travel 3,600 miles, 15 times farther away from Earth than the International Space Station.

During this trip, Orion will fly farther than any spacecraft has traveled in 40 years, according to NASA.

When Orion returns to Earth, speeding through the atmosphere, it will reach temperatures of 4,000 degrees Fahrenheit (2,200 Celsius) and a speed of 20,000 mph (32,000 km/h). NASA scientists will monitor the spacecraft during its travels to see how it performs during launch and re-entry, gathering information to improve the craft's development. Following this flight, an unmanned Orion is scheduled to next enter space atop the SLS in December 2017. [See Photos of NASA's Orion Space Capsule] 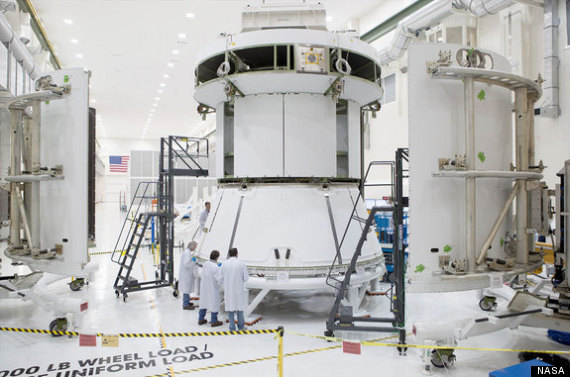 NASA engineers ready the Orion EFT-1 mock service module for installation of the fairings that will protect it during launch when Orion lifts off on its first mission, now slated for December 2014.

In the past few months, Orion has passed several preliminary tests to prepare for the upcoming launches. On April 8, Orion underwent "integrated testing" at the Kennedy Space Center in Florida to determine how well the craft's electronics would perform. Specifically, the procedure probed whether the crew module (the part of Orion that will actually house the astronauts) could send commands that control the capsule's onboard computer, NASA officials said.

Orion also passed a test on April 17 that subjected the vessel to intense shaking, mimicking the violent motions it will experience during the beginning and ending of its space voyage.

Orion is designed to carry people, so it will have a Launch Abort System (LAS), which will separate the craft from the launch rocket in case of an emergency on the launch pad or early in the ascent.

Because Exploration Flight Test-1 will not include astronauts, however, the full LAS will not be activated. According to a NASA spokesperson, the only LAS component that will certainly be active in this year's test launch is the jettison motor, which launches the pointy, needle-like LAS unit away from Orion. The LAS sits on top of the module like a dunce cap.