Could this jumble of poles one day bounce around on Saturn's moon Titan?

Called the Super Ball Bot, this collapsible rover prototype is being developed at NASA's Ames Research Center for a potential mission to the planet-like moon. It is being designed to replace the heavy and costly machinery traditionally used for such exploration missions. Watch the springy bot in action in the video above.

Landing a rover on another world is no easy feat. But for the Super Ball Bot, its light and agile build requires no parachute or other landing gear to descend.

"Ideally, teams of dozens or even hundreds of small, collapsable robots, weighing only a few kilograms a piece, will be conveniently packed during launch and would reliably separate and unpack at their destination," according to a report from NASA.

The bot's ability to absorb impacts means "falling over cliffs and rolling down hills and mountainsides may not pose any problems for the rover," Tech Times reported.

How does it work? The device is made up of rigid rods and flexible cables. Motors connected to the cables shorten and lengthen them, changing the robot's shape and allowing it to roll around. The design was inspired by the principle of tensegrity, which involves placing a set of isolated compression components inside a net of continuous tension. 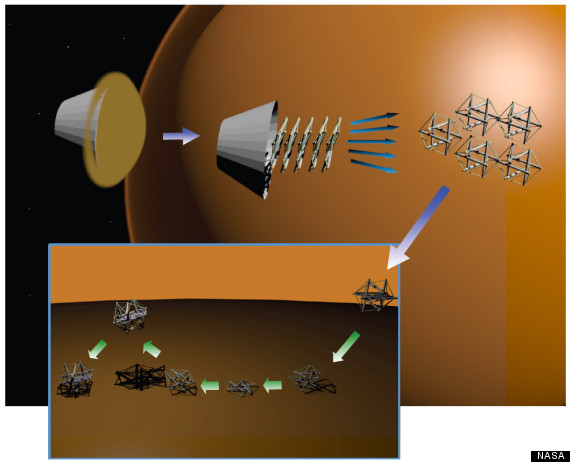 A concept drawing of the mission, where many Super Ball Bots could be deployed and bounce to a landing before moving and exploring the surface.