By Sarah Zhang for WIRED. 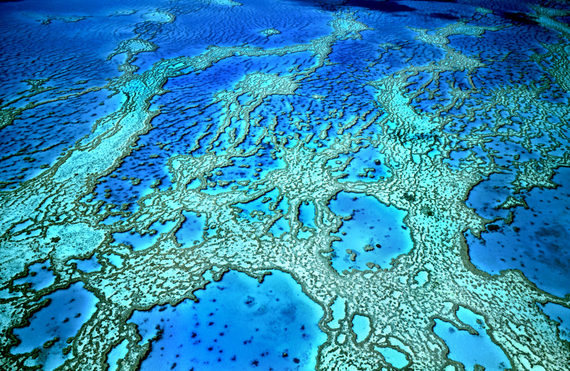 The Great Barrier Reef, transposed to North America's west coast, would stretch from Baja California to British Columbia. "How do you study that big of an area by doing hour-long hikes?," says Eric Hochberg, a marine biologist at the Bermuda Institute of Ocean Sciences. Yet for a long time, scientists studying coral have essentially had to do just that. Since the 1950s, says Hochberg, the state of the art has been a mask and a scuba tank. Scientists studying coral reefs do so an hour at a time, until their air runs out.

Next week, that will change. Hochberg is principal investigator of a NASA-backed experiment called, well, CORAL for the COral Reef Airborne Laboratory. CORAL will use a state-of-the-art spectrometer to map reefs in four locations: Hawaii, Palau, the Mariana Islands, and parts of the Great Barrier Reef. (Even from the air, that thing is too big for one bite). These maps will provide a baseline comparison for future surveys. Climate change and the recent widespread coral bleaching events make such a project only more urgent.

For Hochberg, CORAL has been a long time coming. He and his collaborators have been trying to raise money to look at coral from the skies since the 1990s. At the time, scientists noticed the Great Barrier Reef and other reefs might be shrinking--thanks to a host of manmade threats like climate change, pollution, and oil spills. Hochberg and his team got close to putting a camera on the International Space Station, but that project fell through. In 2015, CORAL finally got the go ahead from NASA.

On June 6, a Gulfstream plane will take off over Hawaii with the Portable Remote Imaging Spectrometer, or PRISM, in tow. Spectrometers such as PRISM measure light by slicing up the spectrum into several bands--you can think of each band as a color range--and measuring the brightness in each band. NASA's Jet Propulsion Laboratory, which has long built spectrometers for spacecraft and satellites, developed PRISM specifically to survey coastal environments. A typical land satellite might look at 9 bands of color. PRISM will look at more than a hundred.

What's the point of slicing up the spectrum so narrowly? "It's a very high signal to noise ratio," says CORAL project scientist Michelle Gierach. And you need as much signal as you can get when the stuff you're trying to look at is underwater. For example, you can't tell the absolute depth of a coral reef based on a normal satellite image. But scientists also know that water absorbs a lot of red light. Depending on how much red, reddish-orange, orange light the spectrometer sees, the team can figure out the depth of the water.

The four spots CORAL is targeting will be only a tiny fraction of the world's coral reefs. But even that will provide valuable data for scientists as they watch how factors like temperature, water quality, and pollution affect coral. Eventually, Hochberg hopes CORAL will be proof of a principle for a satellite that can continuously monitor coral.

If a satellite just for monitoring coral seems a little bit far-fetched, consider that PRISM can already so much more than find reefs. Gierach has already worked with teams using PRISM to survey eelgrass and phytoplankton blooms in the ocean. In the Sacramento-San Joaquin River Delta, the cloudiness of the water can be used to track the presence of the critically endangered delta smelt, which are a continuous source of headaches for water pump operators there. And the health of corals themselves can be a harbinger of things to come. "Coral reefs are a true canary in the coal mine," says Gierach. And when you watch them from the sky, you don't have to worry about running out of air.

Playboy Trades Nipples for Good Design, and It Works (NSFW)

Fantastic Photos of Terrible Junk Food Around the World

9 of the World's Most Outrageously Expensive Headphones

Here's What Space Actually Looks Like to the Human Eye

Your Complete Guide to the Ever-Ballooning Marvel Cinematic Universe