Since the 1960s, when NASA astronauts first left the confines of Earth to begin exploration above and beyond our planet, their cameras have captured some amazing sights.

Some of those moments will be revealed Tuesday night on "NASA's Unexplained Files," the final episode of the Science Channel's month-long "Are We Alone?" series.

Through astronaut interviews and comments from leading scientists, "NASA's Unexplained Files" raises a question about the things they photographed: Is this proof of extraterrestrial life or simply misidentifications of "normal" objects? 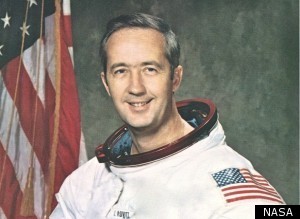 One case goes back to June 3, 1965, during the Gemini IV mission when Ed White performed the first space walk by an American. At one point during the flight, command pilot Jim McDivitt, pictured at right, spotted an unusual object in space.

"At the time that I saw it, I said there was something out in front of me or outside the spacecraft that I couldn't identify, and I never have been able to identify it, and I don't think anybody ever will," McDivitt said back in 1975.

"We were in drifting flight and my partner, Ed White, was asleep. I couldn't see anything out in front of me except just the black sky. And as it was rotating around, I noticed something out in front that was a white cylindrical shape with a white pole sticking out of one corner of it -- it [looked like] a beer can with a smooth pencil sticking out."

McDivitt wasn't able to tell how close the object was or its size because depth perception in space isn't very good unless you know what the size of the object is that you're looking at.

"I grabbed two cameras and took pictures of it," McDivitt continued. "As the sun shone on the window, I could no longer see out and the thing just disappeared. They checked NORAD records to see what they had up on radar and there wasn't anything within very close range of us."

After McDivitt and White landed in the Atlantic Ocean, the films were flown back to Houston, and McDivitt was less than satisfied with the results.

Watch this video segment about the photos taken by McDivitt on his Gemini flight:

"I've seen the photos that were released. I went back and went through each frame of all of the pictures that we took...and there wasn't anything in there like what I had seen."

Rocket scientist and former space engineer James Oberg is one of the leading experts of space exploration and is pretty sure about what McDivitt photographed.

"The interpretation of that is, in fact, he had been doing chasing maneuvers with his upper stage, as part of the first-ever American rendezvous experiment. Because McDivitt had seen the rocket booster during his maneuvers and then saw this, he's quite convinced this was not his booster," Oberg told The Huffington Post.

For must-reading on Oberg's take about these kinds of stories, check out his "99 Frequently Asked Questions About Astronauts and UFOs."

In another case presented on "NASA's Unexplained Files," the crew of the space shuttle Columbia attempted to deploy a satellite attached to a 12-mile-long cable or tether during their 1996 mission, STS-75.

The tether unexpectedly broke and drifted away from the shuttle. The cameras then caught footage of many circular objects approaching the distant tether and flying around and behind it. Were these genuine UFOs?

"These large objects that appear to be floating behind the tether -- because they're sharply outlined -- appear to be some type of intelligently constructed vehicles," said photo analyst Marc Dantonio, whose company, FX Models, creates special effects and has contracts with the U.S. Navy, Congress and the Joint Chiefs of Staff in Washington, D.C.

"The tether is miles away and is 12 miles long, and these objects appear to be miles across, and this is what excited the UFO community so much -- this was their smoking gun."

Unconvinced, Dantonio created an experiment where he recreated the tether, hung small particles in front of it and filmed them.

"The particles are brightly lit and are also out of focus, making them appear very large," Dantonio said. The resulting optical illusion shows the particles seeming to pass behind the makeshift tether, even though they're actually passing in front of it.

"This shows that the STS-75 incident, which caused a massive uproar, was nothing more than a video illusion."

While these and other attempts at explaining most -- if not all -- astronaut UFO images are presented in the Science Channel special, there's also an equal dose of scientists speaking out in favor of intelligent life existing throughout the universe.

"We're beginning to find planets that are sort of like Earth. All signs and arrows are pointing in the same direction -- namely, that there probably is life out there," said Seth Shostak, senior astronomer at the SETI Institute in California.

In their ongoing search for extraterrestrial intelligence (SETI), Shostak is boosted by the fact that the Kepler spacecraft has discovered hundreds of new planets -- many of which are considered habitable -- and the amazing results of the Hubble Space Telescope which suggest that our home galaxy, the Milky Way, may harbor millions (or more) of habitable worlds.

"The number of planets in the part of the universe we can see is roughly comparable to the number of grains of sand on all the beaches of Earth," Shostak added. "The bottom line is very simple: With such enormous amount of cosmic real estate, it seems so improbable that we could be alone."

Story Musgrave, one of the most experienced astronauts in history, is convinced Earthlings aren't the only intelligent species in the universe. He has flown six space shuttle missions, repairing the Hubble Space Telescope and performed the first shuttle spacewalk in 1983. 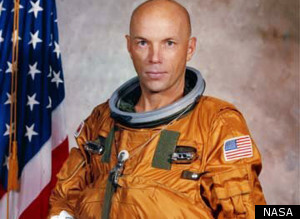 But, he just doesn't believe there's any evidence that Earth has been visited by ETs.

"Based on my interpretation of everything that's come my way, I cannot arrive at the idea that we have been visited, either in the past or now," Musgrave, pictured at left, told HuffPost.

"I've seen what other astronauts think is evidence, and for me, it's not evidence. And I found no conspiracy in terms of covering up information about extraterrestrial visits. But I feel that [aliens are] everywhere out there and they're doing interstellar travel."

Check your local listings for tonight's premiere of "NASA's Unexplained Files" on the Science Channel.