NASA's twin Voyager spacecraft have made a baffling discovery along their journey to the outer limits of the solar system.

Scientists studying the Voyager data noticed what may be giant magnetic bubbles located in the heliosphere, the region of our solar system that separates us from the violent solar winds of interstellar space.

The bubbles, scientists believe, form when the sun's magnetic field becomes warped at the edge of our solar system.

"The sun's magnetic field extends all the way to the edge of the solar system," astronomer Merav Opher of Boston University said in a statement released Thursday. "Because the sun spins, its magnetic field becomes twisted and wrinkled, a bit like a ballerina's skirt. Far, far away from the sun, where the Voyagers are, the folds of the skirt bunch up."

What will these bubbles tell us about the way our sun's magnetic field interacts with interstellar rays entering our solar system? According to CNET, Voyager project scientist Ed Stone told CBS News that this layer of bubbles "might affect how cosmic rays from outside can actually get inside the heliosphere. They have to sort of manage to get across all these bubbles."

Take a look at NASA's renderings of the heliosphere, comparing the old model (before the bubbles were discovered) and the new model that includes the bubbles. Then, watch NASA's video for more information about this remarkable discovery.
LOOK: 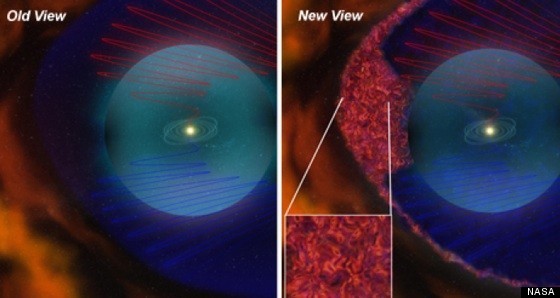