Nasim Nasr has two new bodies of work. One is called Zaeefeh (The Wretchedness), 2015. Across her portraits of historical Persian shahs, the artist has inscribed Farsi quotes. These quotes include citations from Iranian poet's Forough Farrokhzad's, Another Birth, and from Iranian writer Sadegh Hedayat's influential story, The Blind Owl (1937). Both writers expressed dissatisfaction with their then-current regimes. Both writers' work was banned in Iran.

The Zaeefeh format is especially effective. The portraits look like the sepia print of an old map or of a formal portrait. They refer to the 19th century carving up of Iran for imperialist powers. They also suggest the out-dated and parochial views that these men held with respect to women. The quotations don't just veil the men's faces. They also resemble palimpsests. Intentional or not, these palimpsests form shapes, like, for instance, those found in Guillaume Apollinaire's poem, Il pleut. As such, the men have become nothing more than the background for artistic and verbal expressions. By a female Iranian artist, no less.

Nasr chose the series title for a specific purpose. In a patriarchal society, the word Zaeefeh refers to the diminutive way in which men refer to their wives, weak and ineffectual.

The other is called Shadi (Happiness). It consists of four Persian daf made from goatskin stretched over wooden drums, converted into light boxes. Inside each skin is an image backlit by an LED light. Each image shows a pair of hands. There's ambiguity as to what the hands are doing. Do they pray? Do they engage in some domestic activity? More to the point, there's also ambiguity as to the gender of the hands. Suggesting human condition processes irrespective of sex, the series levels discrimination based on gender bias.

What one extracts from both series hinges on the definition that one brings to art. On one hand, art can be seen as literal and journalistic, the stuff of a status quo. An image is seen as a window onto the world. So, as in the case of any one of the Zaeefeh pieces, a literal reading would be one of disrespect if not blasphemy, putting what amounts to graffiti on the portraits of shahs.

On the other hand, art can be seen as a mirror, the stuff born from the conflict that secularization, reform, and progress create. Overlapping portraits of shahs with the words of writers fed up with current regimes, the work can be read as multi-layered, historical, archaeological, and, perhaps, even humorous, the way that Monty Python sketches are humorous.

Nasim Nasr will show with GAGPROJECTS Adelaide/Berlin at the 2015 Art Dubai. 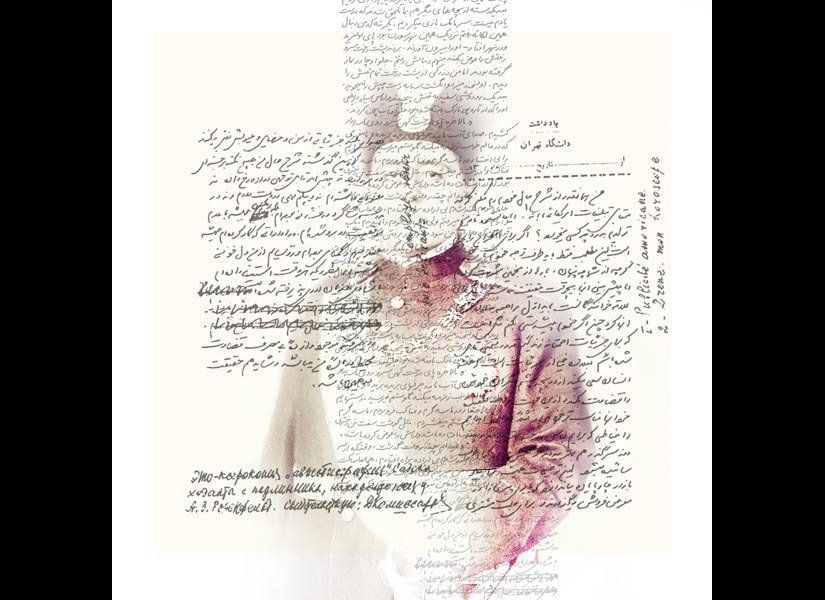