The Nassau Grouper, a strikingly colored, large iconic Caribbean reef fish, was once one of the mostly heavily fished species in the region. Due to unsustainable exploitation practices, however, it is now scarce in many coral reef ecosystems throughout its native range. In 1996, after an estimated 60% population decline in just thirty years, the International Union for the Conservation of Nature (IUCN) classified the Nassau Grouper as "endangered". 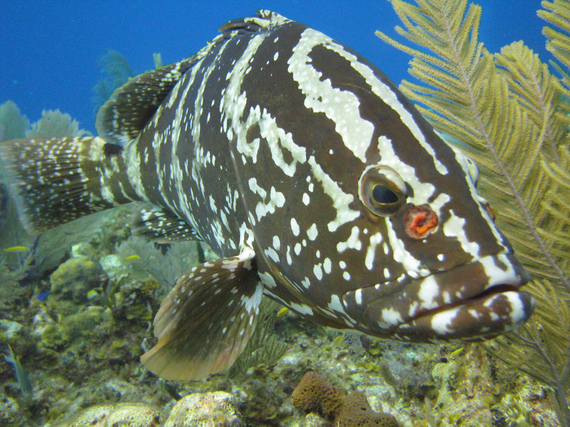 Unfortunately for the Nassau Grouper, its reproductive strategy contributes to its downfall. During most of the year, the grouper are homebodies living under coral ledges and reef structure, barely moving more than a few hundred meters from their home in a day. Over winter full moons, however, when it is time to reproduce, they migrate great distances - often over 100 miles - to specific locations where they meet up with thousands of other Nassau Grouper who have also travelled great distances to reproduce. These meeting areas are known as spawning aggregations. At these spawning aggregations, the grouper change color and engage in beautiful, complex courtship rituals timed to occur within minutes of the sunset. Their eggs, fertilized in the water, float to the surface and drift with the currents for up to 40 days, when the next generation of Nassau Grouper, as tiny larval fish, swim down and settle in the safety of shallow coastal habitats such as seagrass beds and mangrove forests. 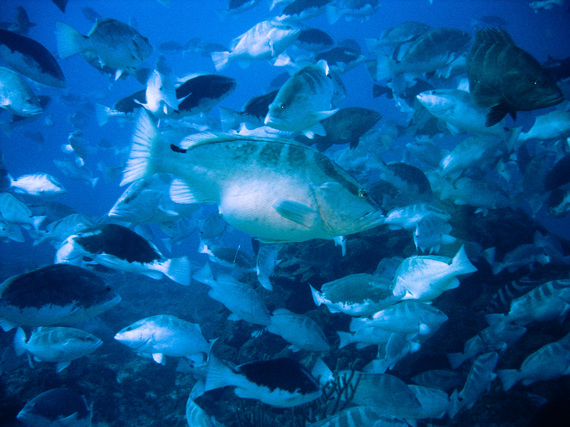 Annual grouper spawning aggregations are so precisely located and timed that they are quite predictable. This is a good reproduction strategy when a species is distributed over hundreds of miles of coral reefs. It's a bad strategy when fishermen know where and when it happens. And they do. Historically, at spawning aggregations throughout the Caribbean, fishermen have caught thousands and thousands of grouper in just a few days, each year, with very little effort. Often, the grouper are caught before they have a chance to reproduce. Therefore, fishing the spawning aggregation removes not only the current generation, but also the next generation. It is a domino effect that has led to today's endangered status for the Nassau Grouper.

In The Bahamas, whose capital city lends the Nassau Grouper its name, the fish is important not only ecologically, but also economically and culturally. Bahamians have fished for the grouper for centuries, and the fishing industry for this iconic species supports thousands of livelihoods, saturating the social fabric of the archipelagic nation. Despite the Bahamian government's 2004 seasonal closure of the Nassau Grouper fishery during the spawning period, populations have continued to decline, likely due to both domestic and international illegal fishing.

In the face of rapid Nassau Grouper population declines and the discovery that several of the reported dozens of aggregation sites in The Bahamas are now defunct, the Shedd Aquarium's Daniel P. Haerther Center for Conservation and Research has embarked on a multi-year research project to enhance conservation and management efforts of the endangered Nassau Grouper in The Bahamas. In partnership with the Bahamas Department of Marine Resources (DMR), Bahamas National Trust, University of Exeter and Perry Institute for Marine Science, the overall project goal is to help DMR better manage the fishery of this iconic species in a more sustainable way through science-based adaptive management.

Since early 2014, Shedd and partners have been tracking grouper movements using cutting edge animal telemetry technology, collecting DNA samples to investigate population connectivity and obtaining blood samples to address questions about reproductive physiology. Our field work, involving a lot of time in and on the water, has been based off of Shedd's research vessel, the R/V Coral Reef II. 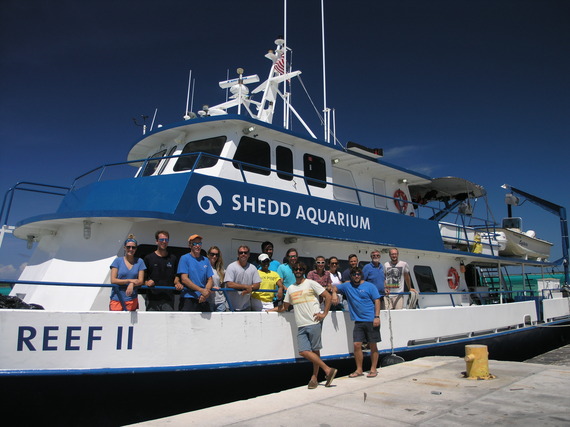 So far, we have made some surprising discoveries about grouper movement and behavior. Stay tuned for the next post, when we reveal some of our findings.

Kristine Stump, Ph.D., Postdoctoral Research Associate at Shedd Aquarium, joined Shedd in 2014 as a postdoctoral research associate in the Daniel P. Haerther Center for Conservation and Research. Her work focuses on spawning aggregations of Nassau grouper. Dr. Stump joins Shedd after earning her doctorate in marine biology and fisheries from the University of Miami's Rosenstiel School of Marine and Atmospheric Science, where her research focused on the effects of nursery habitat loss on juvenile lemon sharks in the Bahamas. Dr. Stump's field work on the island of Bimini at the Bimini Biological Field Station revealed that lemon sharks are highly vulnerable to habitat loss caused by human disturbances and cannot seek out new nursery grounds even if the quality of their habitat and food availability is compromised.

Postdoctoral Research Associate at the John G. Shedd Aquarium in Chicago focused on spawning aggregations of Nassau grouper in the Bahamas.