When my granddaughter's prom dress arrived in the mail from a shop called Nasty Gal, her mother promptly opened it. Her father, who has been driven prematurely gray by this precocious 18-year-old, hovered over the box. "Seriously?" he said, his eyes wide and filled with fear. "She's ordered her prom dress from a place called Nasty Gal?"

"It's very IN," said the mom, unwrapping it. Out came what appeared to be a lacy slip. "Yeah, but where's the dress?" said her father, his heart beginning to pound.

"This IS the dress," said her mother, folding it back in the box and sighing.

A quarter century ago, when that very mother was going to her senior prom, her friends were choosing pretty formals in pastels, with matching pastel kitten heels. She chose a black Norma Kamali dress with long, batwing sleeves and a very short and clingy skirt. Her black satin Charles Jourdan heels were so high they had room for the trail of rhinestones. Of course this was the daughter who was wearing gray pinstripe suits at age 11, so I shouldn't have been surprised.

Last night she invited me over to see the flurry of prom preparation with my granddaughter (Nasty Gal customer) and six of her friends. The first girl to put her dress on was a vision in strapless white chiffon with rhinestones. The next dazzled in red chiffon with a very low back, also glamorous. And so it went, each young woman looking lovely in many colors and long, or knee-length, skirts.

And then out came Nasty Gal. Not only was she wearing the black slip, but she had chosen -- I am not making this up -- logger boots for her feet. While this decision might have been made with comfort in mind, I had a hard time envisioning the prince reaching down to retrieve it on the staircase. And then! I stood dumfounded as she donned a levi jacket and a tan leather backpack!

She looked up at me, saw the look of horror on my face, and said, "You bought me these boots."

"But not for the senior prom!"

She smiled, looked around at her pals in various stages of formal dance dress, and said, "One of these things is not like the others," harkening back to Sesame Street, where she learned at age three to differentiate. Well, she has differentiated, all right, just like her mother before her. No Ginger Rogers for her. She strode forward in those logger boots to pose with her buddies for their group photo.

As the young ladies arranged themselves on the stairs, I noted with yet another wave of horror that underneath their long dresses, instead of Ginger Roger dancing heels, some were wearing Birkenstocks. Birkentstocks! Well, I tell you I almost fainted. But then I was born just after the abdication of Edward VIII, so we had not heard of Birkenstocks.

More than half a century ago, I stepped into my cloud of pale blue tulle for my senior prom. My linen high heels, dyed violet to match the violets scattered in my billowing skirt, came off after the first dance, my feet hurt so much. My nylons were ripped to shreds on the dance floor. I would have taken them off in the ladies' room, but then my garters would have been flopping about against my legs, and I couldn't fit my awful garter belt into my evening bag.

Fifty years ago it would not have occurred to any of us to be different from the others if we could help it. We hobbled about on our kitten heels, trying desperately to fit in. We had no idea where we were headed except to a dance, college, and marriage. Every one of those young women last night seemed to have a sense of who she was, what she liked, where she was headed, and she delighted in not being like the others.

Every grandmother knows our job is to remind our grandchildren to stand up straight. I did that as they stood on that staircase. They looked at me with the compassion that goes when looking at the aged and dotty.

But they did stand taller anyway. They ought to. They are the future, and, sensible shoes and all, they have my love and respect. 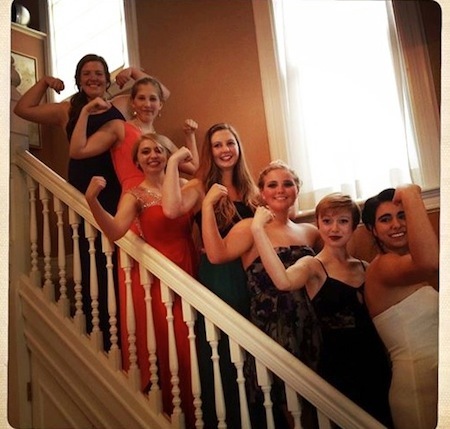