Natalie Merchant was in London last week promoting the release of her new album. The singer-songwriter performed sold-out shows, appeared on the BBC, and joined author Alain de Botton on stage for a conversation about her latest record.

One of the songs from Merchant's self-titled album (on Nonesuch) is a homage to silent film star Louise Brooks. The song is titled "Lulu." During the event with de Botton, Merchant unveiled the video for "Lulu." It excerpts scenes from Pandora's Box, the once infamous, now famous 1929 silent film in which Louise Brooks played Lulu.

"By writing 'Lulu'," Merchant explained, "I tried to compress her colossal life into a few verses of a song. She was such an intelligent, sensuous woman, an intuitive artist born years before her time. She was hedonistic and unapologetic, headstrong and impulsive. She rose to dizzy heights of international stardom and fell into a life of hand to mouth subsistence and seclusion only to be rediscovered and revived again before her death."

Merchant's "Lulu" is the latest pop music tribute to Louise Brooks (1906-1985), a silent film star who suffered decades of obscurity and was reluctantly brought back into the limelight late in life. Today, with an ever-growing fandom, Brooks' reputation has gone from cult figure to 20th century icon.

Brooks has, along the way, also gathered a number of admirers in the world of music. Madonna, Siouxsie Sioux, and the country music star Lorrie Morgan have all name checked the actress and, at times, modeled their own look after the silent film star.

Also among Brooks' admirers is singer songwriter Rufus Wainwright. In 2010, he released All Days Are Nights: Songs for Lulu (Decca), his own tribute to the actress. Wainwright's interest in Brooks was widely written about at the time, including here on the Huffington Post. Earlier this month, in an interview with Out magazine, Wainwright explained the grip the actress holds on his imagination, "My spirit animal is Louise Brooks from Pandora's Box. That character she plays in the film, Lulu. That's why I wrote Songs for Lulu, she needed to be appeased."

Merchant and Wainwright are not the first well-known artists to pay musical tribute to the bobbed-hair silent star. Before them, Mike Doughty of the alt rock band Soul Coughing penned "St. Louise Is Listening," his own slacker jazz homage. The song appeared on Soul Coughing's seminal 1998 release, El Oso (Slash/Warner), and on Doughty's 2013 album of reimagined Soul Coughing songs, Circles Super Bon Bon..... Doughty, it should also be noted, sports a Brooks tattoo.

And before Soul Coughing, there was the new wave band Orchestral Maneuvers in the Dark, who's "Pandora's Box (It's a Long, Long Way)" was the second single from their 1991 album Sugar Tax (Virgin). Like Merchant's "Lulu," the official OMD video features clips from Brooks' famous film. Watch it here. The Andy McCluskey penned song made the top 20 in the United States, United Kingdom, Sweden, Germany, and Austria, and was even covered by an Estonian pop singer, Jüri Homenja, whose version is titled "Pandora laegas." Be sure and check out the more recent OMD concert video embedded below; it features huge projected images Brooks.

There are other notable pop and rock tributes. In 1993, Australian Jen Anderson was asked to compose music for a screening of Pandora's Box. Her original soundtrack included a vocal number, "Lulu the song." It's a lyrical piece, and was a hit down under. Just as poignant is "Lulu," from ex-Lowest of the Low front man Ron Hawkins. His "Lulu" appeared on The Secret of My Excess (Shake) in 1995, the first solo effort the Canadian indie rocker. There's also Ross Berkal's rock ballad
"MLB (for Louise Brooks)," from 2010.

Other indie musicians who have recorded songs about or referencing the actress include Paul Hayes' "Louise Brooks," from his 2003 album Vol.1: Love And Pain And The Whole Damn Thing (Autocthonous Recordings), and Gosta Berling's "Berlin," from the San Francisco band's first EP, Everybody's Sweetheart (Baroquen Records, 2008). Sarah Azzara's terrific "Like Louise Brooks," from her 2000 album Revenge of Dangergirl (Latest Records), uses the actress' iconic image as a visual/cultural reference.

Marillion, a British band formed in 1979, are regarded as one of the most successful groups to emerge from the neo-progressive rock scene of the 1980s. They've sold 15 million albums worldwide. Their song "Interior Lulu," from 1999's marillion.com (Sanctuary), also references the actress.

Brooks may be more popular in France than just about anywhere. Among the French acts that have recorded tributes to the actress is the musette revival band Les Primitifs Du Futur (whose line-up includes cartoonist Robert Crumb); they reworked the haunting theme song from the 1930 Louise Brooks film, Prix de Beauté, into "Chanson pour Louise Brooks." Their version appears on the 1999 album, World Musette (Paris Jazz Corner).

There are other musical tributes to the actress. A search through Spotify, CD Baby, Soundcloud, iTunes, Last.fm, ccmixter, and elsewhere will turn up a number of other examples about the "damned and beautiful" actress, as one lyric put it. See the slide show which accompanies this article for more tracks, including work by the trio of John Zorn/George Lewis/Bill Frisell, The Subterraneans, TIMELOCK, Lou Reed & Metallica, and others.

Most of the above mentioned tracks can also be heard on RadioLulu, my Louise Brooks-inspired, silent-film themed online station streaming music of the 20s, 30s, and today. It is hosted on live365.com. If you don't know Brooks' life story, and why so many musicians would record songs about her, be sure and check out Barry Paris' heartbreaking 1989 biography. It is available from the University of Minnesota Press.

Thomas Gladysz is an arts journalist, silent film enthusiast, and the founding director of the Louise Brooks Society, an online archive and international fan club devoted to the film star. Gladysz has curated exhibits, contributed to books, appeared on television, and introduced the actress's films around the world. 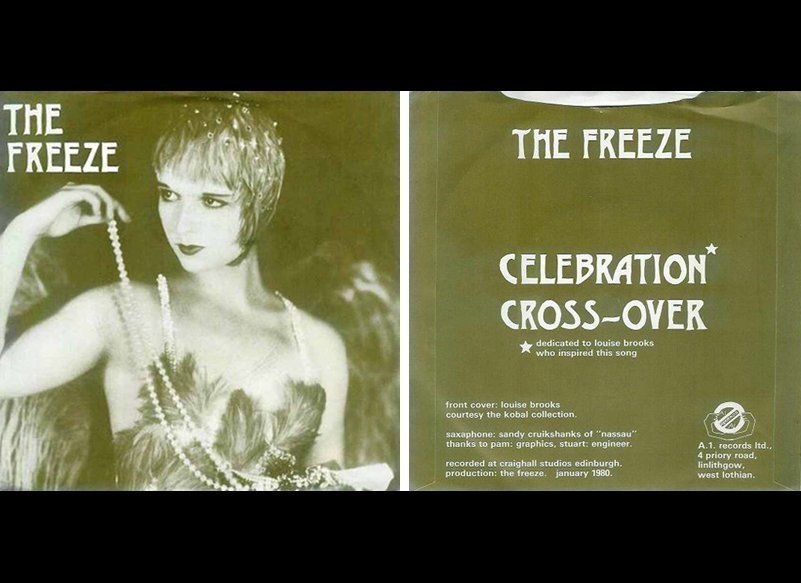 1 / 9
The Freeze
The first rock music nod to Louise Brooks may be from The Freeze, a Scottish punk band formed in 1976. They released a 7" EP in 1980 featuring the song "Celebration" (A.1. label), which the back cover notes is "dedicated to Louise Brooks who inspired this song." [Composer Gordon Sharp reportedly sent the recording to the actress.] The Freeze changed their name to Cindytalk in 1982, and are still performing and recording.