Portman, a 2003 graduate of Harvard, was the keynote speaker at Harvard College's Class Day on Wednesday. Portman joked up front that she had wanted some comedy writers for her speech because at her Class Day, Will Ferrell was their hilarious speaker. She didn't get anyone to help her craft jokes, she said, and so Portman's speech largely focused on her explaining how she confronted her own doubts when she went to Harvard.

In high school, she was voted most likely to be a contestant on "Jeopardy," which Portman said was "code for nerdy." But when Portman came to Harvard, after the 1999 release of "Star Wars: Episode I" that she starred in, she was worried she'd be viewed as unworthy and only gotten in because of her fame.

"I got in only because I was famous -- this is how others viewed me and how I viewed myself," Portman admitted. Portman said she would have some "pretty dark moments" as a Harvard student.

"There were several occasions I started crying in meetings with professors, overwhelmed with what I was supposed to pull off when I could barely get out of bed in the morning," she recounted. 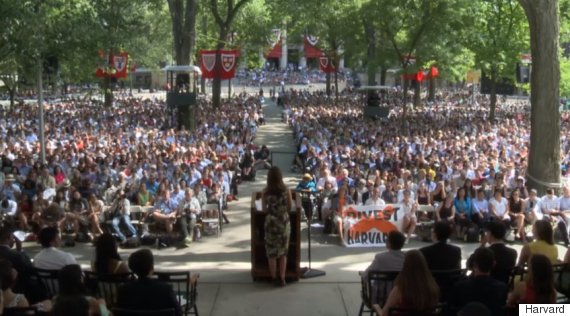 Bouncing between researching about underground groups for her role in "V for Vendetta" and making the stoner comedy "Your Highness," among other films, Portman said she learned to find her own meaning and not have her success determined by box office receipts.

Portman learned as she studied for her role in "Black Swan" that "the only thing that separates you from others is your quirks, or even flaws."

"There was a reason I was an actor," Portman said, "because I love what I do and I saw from my peers and my mentors that was not only an acceptable reason, that was the best reason."