Natalie Portman reportedly refused to sign on to the upcoming Ruth Bader Ginsburg biopic until it had a female director.

Portman is set to play the Supreme Court justice in "On the Basis of Sex," which will chronicle Ginsburg's early days as a lawyer.

In conversation with California Supreme Court Justice Goodwin Liu at this year's American Constitution Society convention on June 13, Ginsburg revealed that that Portman was adamant a women direct the movie, putting the project on pause.

"Natalie Portman came to talk to me about this, and we had a very good conversation,” Ginsburg said. “And one thing interesting that she insisted on, it held up the project for awhile. She said, ‘I want the director to be a woman. There are not enough women in this industry. There are many talented [women] out there.’ And now they do have a woman director.”

In May, it was reported that Marielle Heller, director of "The Diary of a Teenage Girl," is currently in talks to direct the movie, though the director of the film has not been formally announced.

Beyond pushing for more women calling the shots, Portman discussed the need for more dynamic female narratives with Elle UK in 2013: "The fallacy in Hollywood is that if you’re making a 'feminist' story, the woman kicks ass and wins. That’s not feminist, that’s macho. A movie about a weak, vulnerable woman can be feminist if it shows a real person that we can empathize with."

(Though we can all agree that Notorious R.B.G. totally kicks ass.)

Portman recently directed her first feature film, "A Tale of Love and Darkness," which premiered at the Cannes Film Festival in May. 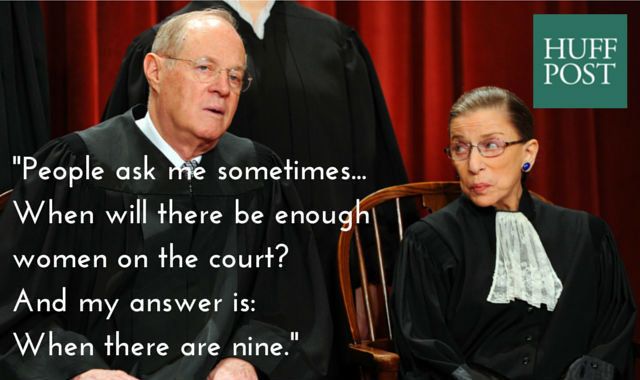