UPDATED 8 PM WEDNESDAY: Natasha Richardson has died, according to a statement from her family.

Lauren Bacall was also photographed visiting the hospital on Wednesday, as were her mother and sister. From the AP:

Vanessa Redgrave, Richardson's mother, arrived in a car with darkened windows and was taken through a garage when she arrived at the Lenox Hill Hospital on Manhattan's Upper East Side at around 5 p.m. Wednesday. An hour earlier, Richardson's sister, Joely, arrived alone and was swarmed by the media as she entered through the back of the hospital.

UPDATED 10 AM:
The only outlet to previously say Richardson's injuries were less severe, TMZ, has backtracked on that claim and now reports she is:

TMZ has obtained information about Natasha Richardson's ambulance ride in New York to Lenox Hill Hospital -- she was "unconscious," her pupils "non-reactive," her skin was "pale" and she was suffering from "major head trauma."

We're told her husband Liam Neeson held her hand the entire time and caressed her face as he sat in silence.

UPDATED 8:00 AM
In addition to Richardson's mother, her two sons, sister Joely and her niece have been photographed leaving New York's Lenox Hill hospital as the AP also reports family has gathered.

"There is no chance," a family friend told PEOPLE on Tuesday night. "It is a fact that her heart is beating but she is brain dead."

Her dire condition - doctors described it to those close to Richards as "leakage of blood between the brain and skull," the friend says - has the actress's family coming to grips with potentially having to make an unthinkably difficult decision. "It's not official yet," says the friend, "but they basically will detach her."

UPDATED 7:45 PM
People reports there was going to be a vigil for Natasha Richarson hours after she was flown via private jet to New York from Canada:

According to sources, friends and family members gathered for a vigil in New York to be with Richardson. It was not immediately known whether she was being taken to a hospital or to her home.

UPDATED 5 PM:
Hours after reports that Natasha Richardson suffered a serious brain injury while skiing, Time Out New York, the NY Daily New, Fox News and the NY Post claim that she is brain dead, which TMZ refutes.

Richardson flew to New York from Canada via private jet, her second hospital transfer in 24 hours. The flight has been confirmed by the AP and a hospital spokesman.

Fox claims she is coming home to then be taken off life support and allowed to die:

Sources close to Tony-award winning actress Natasha Richardson tell FOXNews.com that the 45-year-old actress is brain dead, and being transported back to New York City before she is to be taken off life support.

The actress has "been on life support since this morning," a source close to the family said. "She is brain dead."

They had no official confirmation, but at 12:39 TONY first reported that she is brain dead, although alive:


Although public reports have not yet confirmed it, sources close to Richardson's family and friends say they have already been told the awful news: She will not survive the accident, and is currently brain dead.

Actress Natasha Richardson is brain dead, after falling in a ski accident in Canada, friends told The Post today.

The TONY updated their story at 1:58 with a clarification about their initial RIP headline, seen below:

TONY's sources have clarified the situation: Richardson is brain dead but has not passed away. Sources close to the family indicate that they are treating it as a death. We will update you on this sad story as circumstances warrant. We apologize to the family and to our readers.

The hospital tells TMZ Richardson is sedated and suffering from brain swelling -- but is not brain dead.

Check back for more and read updated reports about the accident here.

THE INITIAL, RETRACTED T.O.N.Y., INCLUSION OF AN RIP HEADLINE: 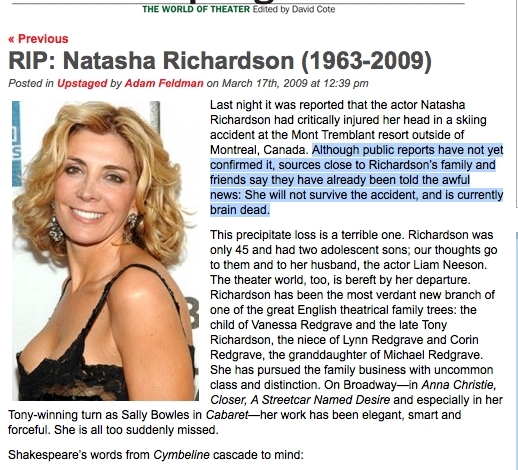