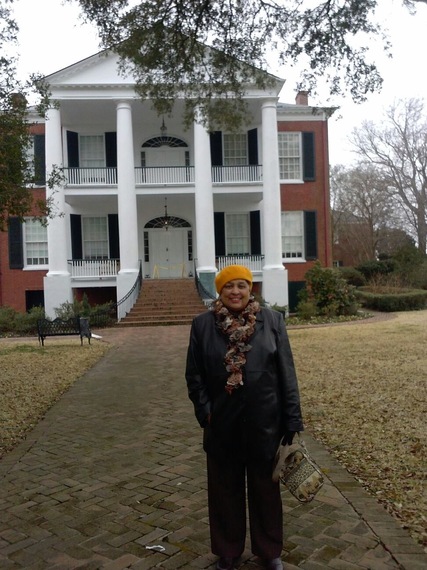 I looked forward to my first visit to Mississippi. During decades of travel across the USA, I have covered much of the South, but had not wandered through or made any forays into the great State of Mississippi. This latest journey by boat on the American Queen Steamship was scheduled to be the perfect opportunity for at least a short stop in Natchez.

Located on a 200 foot bluff overlooking the Mississippi River, Natchez sits daintily on a stretch of land framed by 800 Antebellum mansions and churches (more than any other southern city) affording a continuous memorial to the images of the old south as it struggles for relevance and survival in the 21st century.

Natchez is a very old Mississippi port city. It's first recorded occupants were the Natchez Indians who settled near the river and probably lived pretty contented lives until the French came along, followed by the British who basically killed them off.

With the arrival of the British and their cultivation of what was soon known as King Cotton and, of course, the slaves who planted and harvested this precious commodity, the town grew to become the second largest cotton producing region in the world. But the scenario changed with the introduction of the cotton gin. The civil war killed commerce in the South and with it came the end of slavery and the end of King Cotton.

This city on the Mississippi presents itself as a little River jewel that connects to a multitude of Antebellum houses and churches -- many in fine restoration shape, some in need of caring attention, and many for sale. Several of us guests on the boat visited the Antebellum home of charming celebrity chef Regina Charboneau. She regaled us with stories of her life in Natchez and served a mean spread of delicious treats from her repertoire of recipes representing the gracious hospitality of her city.

A stop on the Hop-on Hop-off bus included the Visitor's Center where we viewed a short video summarizing Natchez' history and interestingly focused on the cultural experiences of the black and white populations of the city, equally divided about 50 Percent.

A highlight for me on this half-day tour was a visit to the William Johnson House. Mr. Johnson is recognized as one of the city's most applauded African American 19th century businessmen. A freed slave at nine years old (likely the son of his owner) Johnson managed to build several successful businesses and buy a home for his family in a fine neighborhood. He even owned slaves. His life ended tragically when, at age 41 he was murdered by a neighbor in 1851.

His accomplishments are heralded in a well-appointed museum on the grounds of his home and barbershop. The museum's didactic materials are informative and include pages from his manuscript on events in his life. His ruminations on life provide an important and rare documentation of the life of a prosperous free man.

The final stop on our tour was the Natchez Museum of African American History and Culture. The Executive Director, Mr. Darrell White, welcomed us to this museum that is chock-a-block with photographs, manuscripts, artifacts, and books, documenting the history of Blacks in Natchez from 1716 forward.

Mr. White seemed genuinely surprised as three of us from the hop-on hop- off bus entered the museum. He offered a well-crafted history of Blacks in Natchez that was instructive and interesting. I wish we had had more time to examine more of the exhibits. I gathered from news articles that unfortunately, the free admission museum gets very few tourist Visitors.

Interestingly, I learned that one of my ancestors, singer Elizabeth Taylor Greenfield, aka the Black Swan, was born in Natchez. Several other African American Cultural icons also were born here including writer Richard Wright, and singer Leontyne Price.

As a city with 800 antebellum mansions, Natchez is a natural draw for devotees of the old south and the traditions therein. Enthusiastic hoop skirted volunteers are eager to show off the stately homes as they pepper tourists with stories about the families that lived on the premises.
.
Natchez struggled through the twentieth century bruised and burdened by a failed economy. The twenty-first century saw more challenges, but cultural tourism has presented the town with a chance to showcase southern hospitality to visitors across the country and around the world. Movie crews have discovered the scenic real estate offerings and celebrities (Ala Mick Jagger) have come for the food, good friends, and the laid back ambiance.

I enjoyed the quiet and picturesque vive of Natchez. I can just imagine the beauty of blooming magnolias and azaleas in the Spring. The experience was a little step back in time-maybe time standing still would be a better moniker for her status. For sure, I hope the heritage tourism initiatives really drive future economic progress.