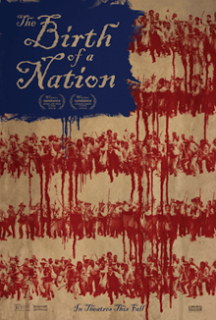 It's somewhat disconcerting that Nate Parker chose to name his film after D.W. Griffith's The Birth of a Nation (1915), since the work of the great silent film director was itself filled with racist stereotypes. Despite its innovations and technical virtuosity, the Griffith masterpiece treats history in a far different light then Parker did Nat Turner's rebellion. But as has been reported The Birth of Nation is rife with its own controversies. The film's release has been overshadowed by the director's unremorseful attitude about his potential involvement in the rape of a Penn State student back in l999. He was acquitted of the charges, but the victim subsequently committed suicide. There had been an out of court settlement between the victim of the assault and the university for $17, 500. Ironically the amount Parker received for distribution rights from Fox Searchlight for the movie was $17,500,000, a record for a film exhibited at Sundance. There are further complications in that the film's depiction of the rape of Nat Turner's wife has been attacked as being historically inaccurate. When the Variety story broke in which Nate Parker's past was revealed, his fortunes seemed to turn overnight. From being at the lionized, he became a pariah. He was abandoned by celebrities like Spike Lee, who had previously trumpeted his cause. The film has done poorly at the box office. Still there are lots of directors who have had to deal with controversy and scandal, most prominently Roman Polanski and Woody Allen. So is it possible to give the film and its director a fair shake while at the same time sympathizing with all the victims, on screen and off? Is the director like the character he portrays the victim of a lynching (albeit of another's kind) and one that's the product of the current climate, in which the attempt to protect victims of rape, inadvertently ends up producing its own set of injustices? All of the controversy surrounding The Birth of a Nation irremediably affects one's view, even as you sit anonymously in a darkened auditorium. However, all this said, and trying to take the film on its own merits, it's hard to see what all the fanfare was initially about. Parker is a one man show. He wrote directed and started in the film and there were probably those who regard or regarded him as a new infant terrible, our generation's answer to Orson Welles. But the film is an almost straightforward piece of historical hagiography with paper thin melodramatic characters. If you expected something esthetically ambitious with brilliant narrative disquisition and a complex cinematic style to match, you may find yourself disappointed. The Birth of a Nation has been subsumed and finally drowned by in its own controversy, but some of the lack of buoyancy may also reside in its own stilted and somewhat narrow design.

Arts Nate Parker D.W. Griffith The Birth Of A Nation