Nate Silver's latest forecast stirs up a fuss. Divided government appears to be growing on Americans. And a lot of people don't know what a health care deductible is. This is HuffPollster for Monday, March 24, 2014.

NATE SILVER SAYS GOP 'SLIGHT FAVORITES' TO TO WIN SENATE - Silver: "We think the Republicans are now slight favorites to win at least six seats and capture the chamber. The Democrats’ position has deteriorated somewhat since last summer, with President Obama’s approval ratings down to 42 or 43 percent from an average of about 45 percent before. Furthermore, as compared with 2010 or 2012, the GOP has done a better job of recruiting credible candidates, with some exceptions. As always, we encourage you to read this analysis with some caution. Republicans have great opportunities in a number of states, but only in West Virginia, South Dakota, Montana and Arkansas do we rate the races as clearly leaning their way. Republicans will also have to win at least two toss-up races, perhaps in Alaska, North Carolina or Michigan, or to convert states such as New Hampshire into that category. And they’ll have to avoid taking losses of their own in Georgia and Kentucky, where the fundamentals favor them but recent polls show extremely competitive races." [538] 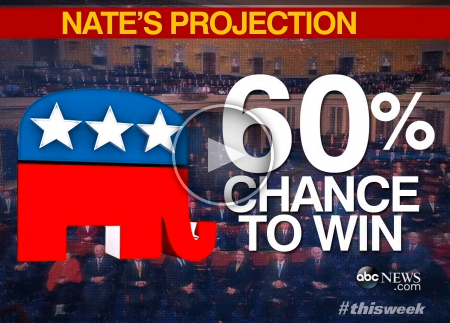 'Is Silver's prediction an outlier?' Jonathan Bernstein answers his own question: "Not at all. A toss up with a slight edge to Republicans is right in line with predictions by Sean Trende; the Cook Report’s Jennifer Duffy; the Rothenberg Political Report; political scientists Eric McGhee, Ben Highton and John Sides; and also political scientist Alan Abramowitz. Those forecasters come from different traditions and use different methods, but they all think Senate control is a toss-up, with slight variations about which party is the favorite." [Bloomberg]

DSCC pushes back - Guy Cecil, executive director of the Democratic Senatorial Campaign Committee: "Nate Silver and the staff at FiveThirtyEight are doing groundbreaking work, but, as they have noted, they have to base their forecasts on a scarce supply of public polls. In some cases more than half of these polls come from GOP polling outfits. This was one reason why FiveThirtyEight forecasts in North Dakota and Montana were so far off in 2012. In fact, in August of 2012 Silver forecasted a 61% likelihood that Republicans would pick up enough seats to claim the majority. Three months later Democrats went on to win 55 seats." [HuffPost]

What the reaction overlooks - First, expressing a forecast as a probability does not make it a certainty. If Silver says he is 60 percent certain something will happen, he should be wrong about it 40 percent of the time. As RealClearPolitics' Sean Trende Tweeted on Monday, in reference to Mercer's upset victory over Duke in the NCAA March Madness basketball tournament, "Yes, @NateSilver538 said Duke was 93% fave over Mercer, but question is really whether teams he says are 93% faves lose > 7% of the time" [@SeanTrende]

This model isn't quite what many assume - The Washington Post's Chris Cillizza: "Silver is a modeler, meaning that he has created an equation -- weighing polls, past performance in state and by candidates etc. -- that spits out a percentage likelihood of a seat changing parties." Not exactly. The models that made Silver famous do exactly that, but this early version is less an equation than a series of data-informed judgements. Silver says as much in his description of the methodology of his latest prediction: "In contrast to the forecasts we’ll begin issuing sometime this summer, which are strictly algorithmic based on our senate forecast model, these are done by hand. However, they’re based on an assessment of the same basic factors our algorithm uses." Two years ago, in explaining a similar early Senate assessment, he wrote: "These forecasts, although they are informed by polling and other objective measures, are ultimately reflections of my best judgments and also account for 'intangible factors like candidate quality and the partisan orientation of the state." Read both descriptions carefully. Silver makes clear that these early forecasts are informed by data, and his process appears to be systematic (though he discloses little of the scoring he used to arrive at the probabilities for each state), but ultimately he's making a series of judgements about each race that add up to probabilities. [WaPost 538 from May 2012]

MANY AMERICANS STILL UNINFORMED ON HEALTH CARE - USC: "The week before open enrollment closes for new health care exchanges, a study by researchers at the USC Schaeffer Center for Health Policy and Economics and the USC Dornsife Center for Economic and Social Research shows that those who might potentially benefit the most from the Affordable Care Act — including those earning near the Federal Poverty Level — are also the most clueless about health care policies….Forty-two percent of Americans were unable to describe a deductible in late August and September 2013 when the survey was conducted, just weeks before exchanges opened to the public, including 68 percent of uninsured people. Sixty-two percent overall did not know a HMO plan had greater restrictions than a PPO. Thirty-seven percent of people did not know there was a penalty for not having health insurance, and only 41 percent of people who had incomes between 100 and 250 percent of the Federal Poverty Line knew they could be eligible for subsidies in the exchanges. In addition, just 17 percent of uninsured people described themselves as having a fair amount or a “great deal” of knowledge about the Affordable Care Act." [USC]

ARE AMERICANS LEARNING TO ACCEPT A DIVIDED CONGRESS? - Susan Page and Kendall Breitman: "The sharp political divide that Americans say they hate may be becoming the new normal. A USA TODAY/Bipartisan Policy Center poll taken this month, the fourth in a year-long series, shows no change in the overwhelming consensus that U.S. politics have become more divided in recent years. But sentiments have shifted significantly during the past year about whether the nation's unyielding political divide is a positive or a negative. In February 2013, Americans said by nearly 4-1 that the heightened division is a bad thing because it makes it harder to get things done. In the new poll, the percentage who describe the divide as bad has dropped by nearly 20 percentage points, to 55% from 74%....Now, Americans say it's more important for their representative in Congress to stop bad laws than to pass new ones. On that, there is no partisan divide: 54% of Republicans and 51% of Democrats say blocking bad laws should be their priority….Still, Americans continue to be more likely to approve of their particular representative than of Congress as a whole. By 52%-34%, those surveyed approve of their own member of the House. Even those who want wholesale change aren't inclined to think that necessarily means defeating the representative of their district." [USA Today]

-Most people say the missing jet got the right amount of coverage. [Pew Research]

-Frank Newport ponders whether Americans will ever return to the economic optimism of the 1980s and late 1990s. [Gallup]

-Timothy Egan says creativity is shortchanged in an age where quants rule. [NYT]

-New Yorkers like the Yankees better than the Mets. [Quinnipiac]

-How to dance, according to Science. [WashPost]