Considering her animated videos mostly incorporate some cocktail of torture, bestiality and sexual abuse, Nathalie Djurberg was quite shy in person. She held her hand over her mouth sheepishly as a video titled "Tiger Licking Girl's Butt" played behind her, an uncomfortable silence looming above the Q&A, only broken by the slurps of the tiger and the faint gasps of the lady licked.

And yet, the Swedish video artist was honest about her desire to wallow in perverse desires, eager to explore both the will itself and the accompanying humiliation. Her tiger film asks the audience repeatedly: "Why do I have the urge to do these things over and over again?" Acts like examining a tissue post-sneeze or peeking in on your parents in the shower show the urges we acknowledge as strange and depraved. In this sense, she ties childish or animal instincts to the most transgressive behavior, making the most heinous acts seem almost innocent.

Her current exhibition at the New Museum features five animated videos and a room full of colorful, multimedia bird sculptures. The birds tap into Djurberg's mastered aesthetic of perverted childhood fantasies, looking as if Buffalo Bill had taxidermied characters from a Dr. Seuss book. Hans Berg, Djurberg's longtime musical partner, provides wonky film scores that overlap throughout the room. With the cohesion of Berg's eerie score and Djurberg's sculptures, you get the feeling that you are stuck in a Disneyland ride just when things start to turn sour.

The animated films revisit the point between human and animal instinct, taking an additional turn toward images and stereotypes of "the wild." (This refers both to the wilderness and to the taboos we transgress.) In the video "Deceiving Looks" a naked black claymated woman crawls through yellow desert; she digs up one snake and then another, who soon begin to attack each other. Blood and guts spew in out in chunks of technicolored play-doh, making the gore kindergarden cute. Yet the horrified look in the woman's eye, reminiscent of Goya's "Saturn Devouring His Son," makes you want to keep any child far, far away from this footage.

During the Q+A, Djurberg said, "It is very easy to see yourself as a victim. It is hard to see yourself as a perpetrator." Although most of us haven't had a sexual experience with a tiger, we have perhaps smelled something in secret, hurt someone on purpose or spent too long gazing at something forbidden. We empathize both with victim and perpetrator, hunter and prey, roles which are changing as quickly as the videos' ever-morphing clay. Djurberg's exhibition suggests it is not the actions which separate us from animals, but the humiliation we are trained to endure for our unsavory instincts.

"The Parade: Nathalie Djurberg with Music by Hans Berg" will show until August 26 at the New Museum in New York. Take a look at the wilderness below: 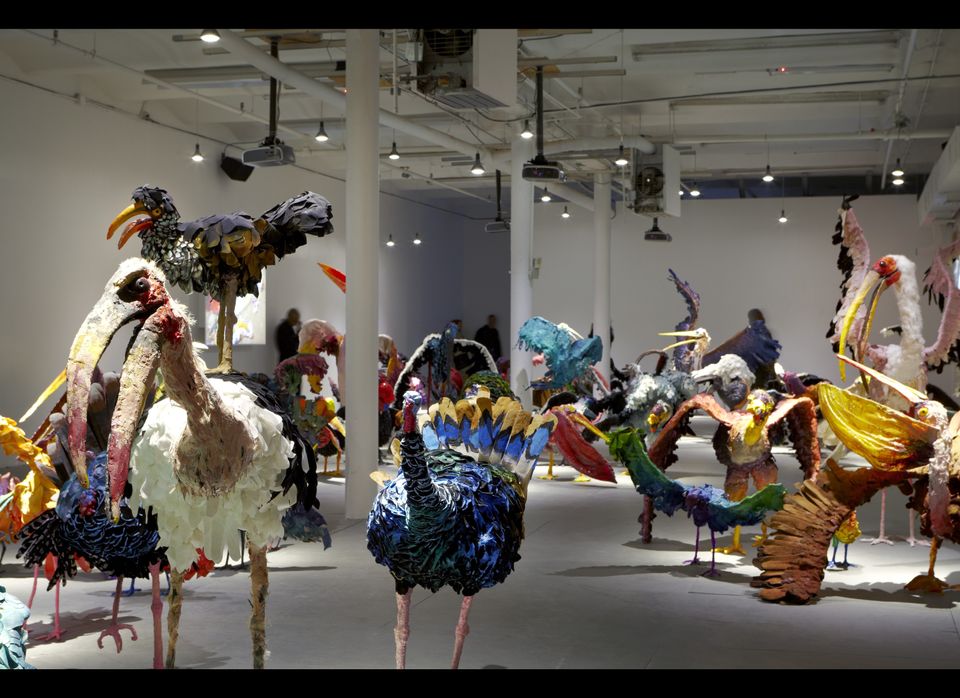