I just got a chance to chat with Nathan Fillion and Stana Katic, stars of the hit show Castle. And I have to say, if you're not watching it, you should be. Great chemistry, laugh-out-loud dialogue, and an awfully pretty cast. You've seen Katic on 24, Heroes and in the recent James Bond film Quantum of Solace. Fillion lead the cast in the beloved, and canceled far, far to early Firefly and the wildly popular web series, Dr. Horrible's Sing-along Blog. The pair gave us the scoop on what's going to happen in season 2, the Firefly Easter Egg that Fillion hid on set, and whether or not Katic would be willing to appear in the Dr. Horrible sequel. 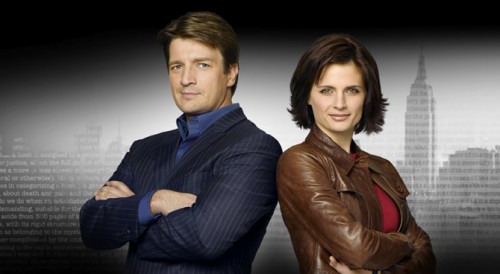 So you guys are back on speaking terms. How is the relationship between Castle and Beckett going to deepen this season?

Nathan Fillion: Well, there's going to be a little rebuild. We kind of have to establish some trust back, you know what I mean? Get a little closer...what do you think about how our relationship is going to deepen?

Stana Katic: I think we've had a bit more flirt this year than last year. And I think the writers have been playing around with that a bit. And we're taking time to get to know the other characters as well. We're going to go there, but we're going to go there slowly and just enjoy every moment.

What do you think it is about the show that's made it so popular?

Fillion: Well, I can tell you why I like it. It's light. I want to watch TV and be entertained. I think there are a lot of mysteries and procedural-type shows on the air that are brooding and dark. It's got a much lighter sort of attitude, our show. And I always miss on those shows when they don't go for the joke. Oh, the guy's head is cut off. 'Oh his head's not really in it.' There's a joke right there. You just didn't go for it. 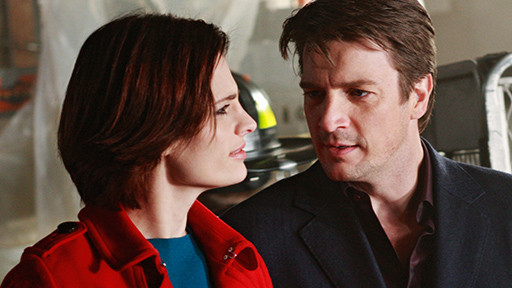 I mentioned this interview on Twitter last night and the response was incredible. One of the questions I've been asked to ask you is how much improvising there is on the show.

Katic: There's plenty of improvising going on. I mean, even the physicality is, most of the time, thought up by the actors, and a lot of that adds up to a comedic bit. And, you know, the guys always work out a comedic ending...a beat...what do you call that at the end of a scene?

Katic: A tag at the end of a scene, just to give the editors an option to end it differently or on a lighter note.

Fillion: Yeah, if there's something going on in the middle of a scene that we want to do, a joke, we work it to see if it will work out. And once the scene is done, it's a free for all. They can cut it at any point. So that's when we start horsing around.

Katic: Yeah, the cameras keep going for a bit to see if they can catch something.

I recently spoke with Phil Lamarr, who is guest starring on your Halloween episode. He told me to ask you guys about costumes.

Fillion: We did some Halloween costumes this year. We're going to dress up. An astute observer, an astute spectator will notice there's some winks and nods and nudges to other television programs that perhaps some of the other actors have participated in.

Ooh, is that possibly the Firefly Easter Egg you mentioned on Twitter?

Fillion: [laughs] I mentioned that. But no, that's not the one. But for people looking for the Firefly Easter Egg, don't look for it before the Halloween episode, because it enters the realm, the Firefly episode. I've put down something on the set.

Fillion: Yeah, an astute observer will see something on the set.

Fillion: An Easter Egg, I call it.

Oh, so you don't know about it Stana?

Fillion: Don't let anybody know. It's the Huffington Post.

[laughs] I noticed the "bam said the lady" in the last episode. [Note: "Bam said the lady" and "Feed the birds" are slang terms created by Fillion. Click on the links to get the definitions.]

Are you going to be creating any more slang this season?

Fillion: New slang. [to Katic] What are you going to...

Fillion: Yes, well, is that yours? Did you invent that?

Katic: A girl on the set.

Fillion: OK. Stana's got some stuff coming up that, I think we should maybe repeat that stuff...

Fillion: No, not right now, but in the show I think we should circle and do it again.

Katic: Yeah, yeah, got that.

Fillion: Some swearing alternatives, you know. Rather than swear, we'll say this.

So are we going to find out any more about Beckett's mother this year?

Katic: Yeah, you know, we deal with it somewhat at the beginning of the season in episode one. And we touch on it in this episode, very briefly. [to Fillion] We have that talk with the board. And that's something for the future that's probably like a series end or a mini-arc at the very end of our season two. So it's definitely a slot in the writers' minds, and something that we'll have to address for sure. And, again, it's another element of the Beckett/Castle relationship that will come to light as we move forward in the episodes.

I happened to be walking through the Grove in Los Angeles the other day, and I noticed that Richard Castle is going to be doing a book signing?

Fillion: You can't stop him. A little bit goofy and a little bit amazing.

Are you going to be doing this in character?

Fillion: Ah, no. I just show up and sign a bunch of books. I've done it once already in Northridge and it was really nice. We had a great turnout. A lot of excited people having a good time.

Katic: You could sign it 'Nathan Castle'. It would be confusing.

Fillion: I have to sign it 'Nathan Fillion'. I've been practicing my autograph since I was in high school. So it would take about three times longer to sign 'Richard Castle' than it does...I don't even have to look when I sign my name. I spend that time with eye contact and getting to know somebody, you know what I mean?

So Castle's book Heat Wave is out. What kind of trouble is that going to cause?

Fillion: [to Katic] I'm looking at you.

Katic: [laughs] I think it's going to be a series that they'll always address throughout the episodes, but I think dealt with all of the problems that it would cause. But there's the opening coming in episode four or five, right?

Katic: Which will be a bit of fun. We get to play around with that. But that's it. I think we dealt with the big elements which are the publicity and the launch of the book and all of that. But we're pretty much in good stead with that. She knows that she's his muse and she's dealing with it.

Fillion: I think the fans are going to see a lot of similarities between Heat Wave the novel and Castle programs that they've been watching. Castle borrows a lot of stuff from his real life to put into that book. But also with a little twist on it that you would expect from Castle, thinking how would he like it to turn out.

If I don't ask you about the Dr. Horrible sequel, I'm quite certain someone will murder me. And I'm a huge Dr. Horrible fan. I've talked to a few of your cast mates about it. Do you know the form yet? Will it be happening as a film?

[laughs] I haven't talked to her yet, but I'm hoping to soon for The Guild. I've talked to Moist (Simon Helberg).

Stana, any chance you'll join them and sing?

Fillion: [to Katic] We'll have to get you in a superhero outfit.

Katic: I'd love to! I thought it was a great, great piece.

So what can you tell us about the next episode?

Katic: We are trying to find out who murdered a model during New York's fashion week. It's a super sexy episode. We have to go through all of the ins and outs of the New York fashion scene. Castle is obviously enjoying himself thoroughly.

Fillion: You want to see a really happy crew on a TV show? Bring in thirty gorgeous extras.

Castle airs Monday nights at 10 pm on ABC. You can follow Nathan Fillion and Stana Katic on Twitter: @nathanfillion and @stana_katic. Season one is available on DVD right now.