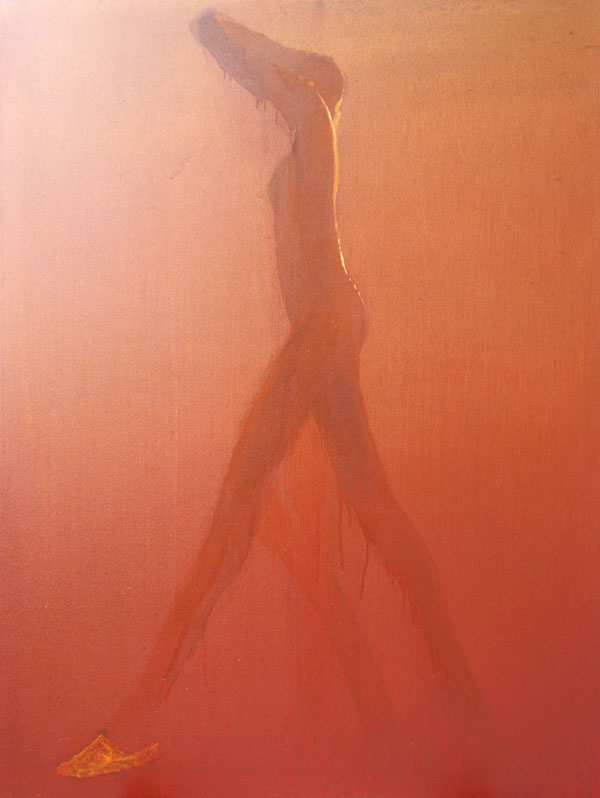 A family friend has confirmed the death of artist Nathan Oliveira, 81, who died at his home in Palo Alto on Saturday, November 13th. Had he lived just two days longer, he could have attended the 90th birthday party of his great friend and fellow artist Wayne Thiebaud, held at San Francisco MOMA the following day.

Oliveira had a tremendous explosion of creativity in the months before his death. On November 1st his son Joe reported to me that his father was doing "great" and that he had over 30 paintings in progress, some small oils on panels, but also some large oils including the one shown above. The outpouring of work was remarkable, since Nathan was suffering from pulmonary fibrosis and was tethered to an oxygen tank. On top of that, he was still very much grieving for Mona, his wife of over 50 years, who died of cancer in December of 2006.

After Mona's death Joe stepped in. He stocked the studio, dealt with art dealers, and sorted through years of accumulated artwork. It wasn't easy for Joe to work for his father who could be forgetful and cranky. One morning Joe arrived at his father's home and studio to have Nathan ask him "Joe, exactly what is it you do for me?"

Thank you Joe, for giving your father the chance to pick up his brushes one more time.

Nathan was growing as an artist until the last moment. In a letter he wrote to me in 1987, congratulating me on my new teaching job, he told me: "...my world expands as I grow older. Painters aren't like athletes when everything is over at 27 years or so. We supposedly get better and have more to say." In Oliveira's case, he didn't need to include the word "supposedly."

Oliveira's work was a celebration of life, and his way of expressing that was through his lifelong depictions of the human figure. Two weeks ago Cigdem Dogan, a painter in Turkey, e-mailed me and asked if I could pass on two questions to Nathan for him. I am posting Cigdem's questions and Nathan's answers here so Nathan can speak for himself one more time:

1) What is Nathan trying to say with his figures?

"They are images that I can interact with, a visual dialog between myself and the figure..."

2) What does Nathan feel that art means to him?

"A means of expression, both cultural and personal. A cultural expression of a moment in time."

Nathan Oliveira was an exceptionally fine painter, and an empathetic teacher. In his own art, and in the art that he admired, he was involved in the search for something that transcended time.

The arc of Oliveira's life story is remarkable. Born to Portuguese immigrant parents, he was raised in the Haight-Ashbury district of San Francisco by his mother and step-father: his father had drowned in the Russian River when he was a toddler. Dyslexic, Nathan struggled in school, and until he saw a Rembrandt portrait during high school he had planned on becoming a bookbinder. Nathan Oliveira died an internationally acclaimed arist, a Professor Emeritus of Stanford University, and a Knight of Portugal.

In 2003 he told writer Diane Rogers: "...whenever I go to New York, I go to the Frick and stand in front of the Rembrandt self-portrait there and see a human, living presence and an energy that touches me. It's that presence that keeps me painting."

Thank you for everything Nathan. I imagine that like the figure in your "Untitled" figure painting, you are walking towards the light.

Author's Note: A public memorial for Nathan Oliveira will be held at Stanford's Memorial Church on Wednesday, January 12th at 2 PM.