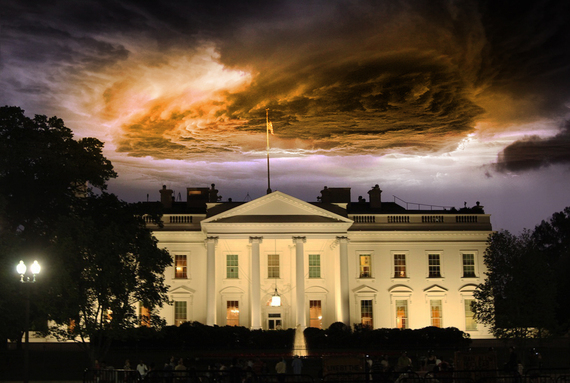 WASHINGTON--Millions across the country are panicking as the orange clouds of Hurricane Donald have begun to form over the nation's capital.

Authorities are cautioning Americans to remain calm, but reports of looting and stockpiling continue to rise as people everywhere prepare for the worst.

Items like basic dignity, mutual respect, and the forward progression of human civilization have been flying off the shelves from coast to coast.

Many families have started hoarding marriage equality, the free press, and a general understanding of climate science, while others are frantically filling their homes with the expectation that no American should have to die uninsured from pre-existing medical conditions.

Minority communities have seen a considerable spike in preparedness activities as residents race to stockpile basic human rights and equal protection under the law.

"People are legitimately scared," said single mother Laura Rollins. "My daughter and I spent all weekend reinforcing the basement with the belief that women are human beings."

"I already have a lot of not wanting to get nuked over stupid shit that could've totally been avoided with some basic fucking diplomacy skills," said small-business owner Larry Cho. "But with Donald picking up speed, I made a special trip to get more."

Relatively weak by itself, it's actually the debris that Hurricane Donald brings with--like its ties to white-supremacy groups, undermining national security, and Rex Tillerson--that experts caution could do the worst damage.

While Hurricane Donald may seem to have come out of nowhere, meteorologists as early as the Republican primaries have warned Americans about the threat of gale-force hot air if emergency precautions were not taken.

And many fear it will take longer than four years to recover.

Host Keegan-Michael Key Shares Love Affair With 'SNL,' Then Takes On The Muppets