It takes a lot of staff to perform surgery on a fish. You need someone to continually run syringes of water over the left gill, another person to take care of the right, and a third to refill the syringes, so that the patient will not asphyxiate during the procedure.

Then there's the surgeon, who is one of the only people in the world taking a knife to this sort of animal with good -- as opposed to good-tasting -- intentions.

Colin McDermott says that not a lot of people really understand what he does for work as one of the four veterinarians on staff at the National Aquarium in Baltimore. Even McDermott's fiancée seems a little mystified as to what fills the day of someone caring for some 17,000 fish, birds, sharks, reptiles, bats, sloths, dolphins, turtles and other marine animals, and she's a vet, too -- albeit one for "cats and dogs," he says.

To try to give the general public a little insight into that mystery, about five weeks ago the National Aquarium began opening up its medical facilities to visitors, as part of what they are calling "immersion tours." Folks curious about how macaws can be given anesthesia, for example, can check out the aquarium's veterinary quarters for about an hour and a half or so while McDermott tries to make his work a little more relatable. 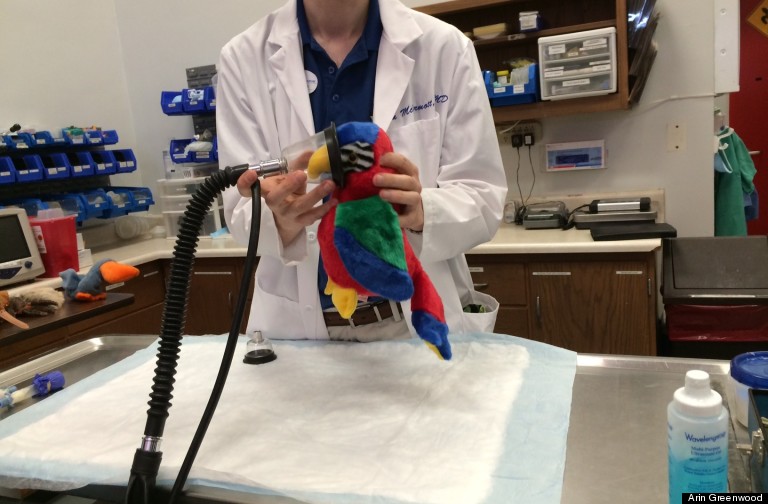 That's a stuffed bird above, standing in for a real-life macaw named Hyacinth, who, McDermott explains, has been trained to "be able to lay on her back. Get sedation. Give a blood sample."

Most of the procedures featured on the immersion tour are indeed simulated. The fish in the photo at the top of this page isn't actually being operated on; he (it's confirmed when McDermott shows visitors the gonads) is one of the unluckier fish in Baltimore since he was brought in not to go on display, but to be eaten by other fish. He was rescued from that fate only to become an anatomy lesson in the lab.

McDermott also has plushy versions of a turtle, a tarantula -- yes, even the National Aquarium's spiders receive medical attention, though the tarantulas' inability to clot blood means they need to be resealed with glue after blood is drawn -- and a snake. In real life, the snake would have its head and neck stuffed into a syringe case sealed with a bit of rubber glove if anesthesia were required, since the other animal masks are all too floppy to work properly. (Exotic animals' care takes a lot of improvisation and repurposing of equipment; distributors have yet to mass-produce reptile-sized surgery masks, it would seem.) 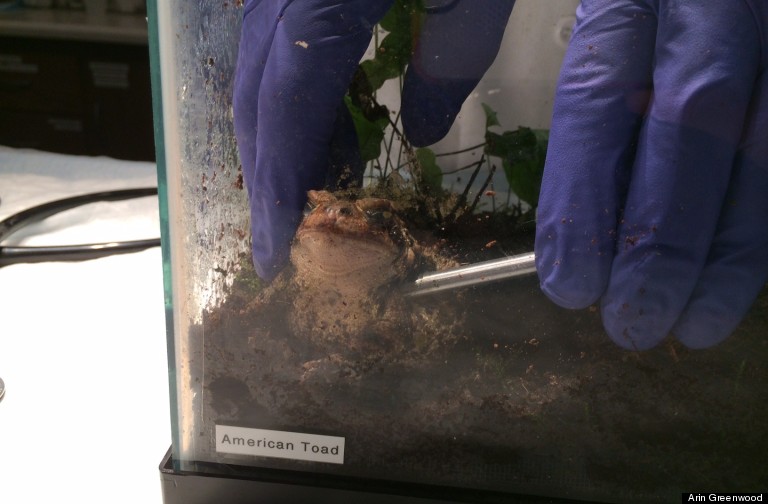 And here's McDermott using what's called a "doppler" machine to check the heart rate of a live toad named Stewie. "She looks pretty normal," he says, listening to Stewie's heart beating: 10 thumps in six seconds. Normal; toads usually have between 60 and 90 beats per minute. McDermott then uses the doppler wand on a person on the tour, who also appears to have a regular heart rate, though, McDermott cautions, "I'm not a human doctor."

McDemott has always liked reptiles, but got into working in aquariums partly as "atonement" for keeping a Chinese water dragon in a too-small cage while he was a child working on a Boy Scout merit badge.

These decades later, on any given day, he may be doing routine work like drawing blood from surprisingly pliant dolphins, or giving sharks their bi-annual checkups -- a procedure which he likens in part to herding cows, a comparison you'll have to judge for yourself if you join one of the tours, offered mostly on Fridays and Saturdays.

Emergencies also arise, like when a turtle is found sick on the beach, and has to be X-rayed -- that can involve taping the turtle to the X-ray table -- which may in turn lead to the discovery of a rusty fish hook trapped in the fleshy spikes of the animal's esophagus. This was removed using a kind of grabber attached to the end of a thin device threaded into the turtle's oral passageways; you'll see a video of all this during the tour. (Speaking of: One goal of these tours is to teach kids, and others, not to throw trash in the ocean.) 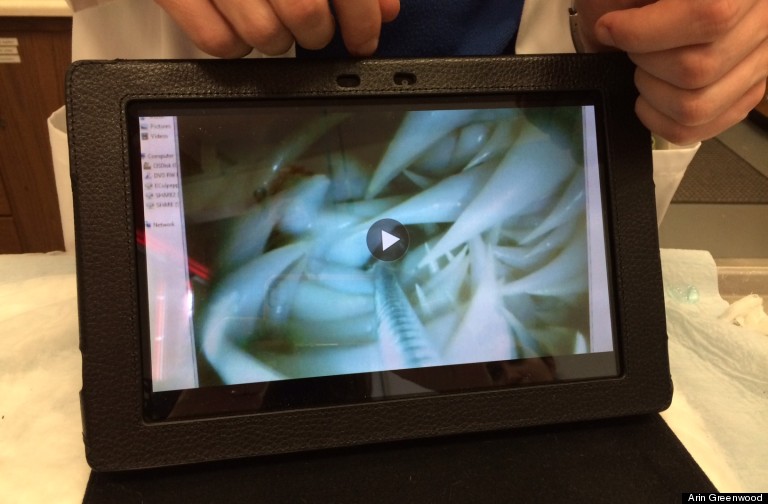 Another day might find McDermott and the rest of the aquarium's medical staff performing a hysterectomy on a fish producing too many eggs. "The question most people ask is, 'Why would you do that?'" McDermott says. Another widely-asked question is: does he still eat fish?

In response to the first question, the surgeon says just that he has "the best job at the aquarium" -- a good mix of spending time with animals, problem solving, working out the best ways to keep these gilled and feathered beings, about whom so little is still known, alive and happy, and now sharing that experience with aquarium visitors so that they can also understand more about what this unusual field of medicine involves. And as regards the second, he says a little sheepishly that, yes, he does, though he does his best to eat only fish that is "sustainably farmed."

As for the fish surgeries, "we have one scheduled tomorrow; we're spaying another fish," says McDermott. She's a freshwater grunter who's "producing too many eggs. Hopefully we'll be able to go in and scoop them out... This is not a standard class in vet school, unfortunately."