A group of women were slated to snooze in the central gallery of the National Art Museum of Ukraine this month, inviting worthy male suitors to try and wake the slumbering women with a single kiss. They're not under the spell of an evil witch or a poison apple however; instead, the ladies have been recruited to participate in an art exhibit appropriately titled "Sleeping Beauty." 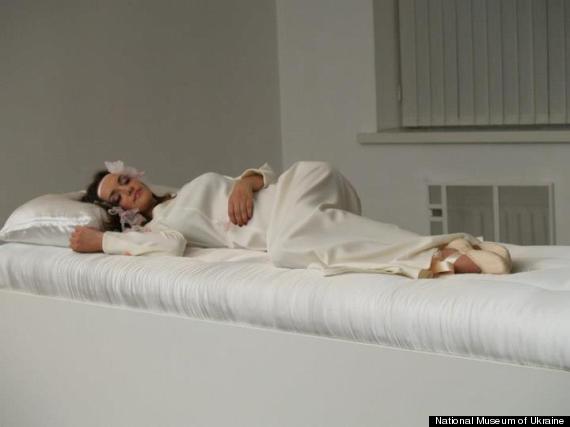 The fairy-tale inspired project was imagined by Ukrainian-Canadian artist Taras Polataiko. Influenced by an old story by Charles Perrault, where a young maiden is cursed to sleep for 100 years, only to be awakened by true love's kiss. In the spirit of this "once upon a time" literature, Polataiko cast several female volunteers as his performance beauties, tasked with "sleeping" in the Ukrainian museum for two hours at a time, every day from August 22nd until September 9th. Dressed in white and laid upon an elevated bed, the women lay motionless in the museum's space, awaiting a kiss from that one perfect museum patron.

But there's a serious legal catch to the piece. To participate in the exhibit, potential princes have to sign a contract that states, "If I kiss the Beauty and she opens her eyes, I agree to marry her." The female performers have also entered into an agreement that reads, "If I open my eyes while being kissed, I agree to marry the kisser." So unlike the chivalrous charmers of yore, these contemporary heroes are contractually bound to live happily ever after if their princess so chooses.

This modern interpretation of damsels in distress gives the woman a say in whether she will be rescued or not, though the performance still adheres to the archaic concept that only a male will awaken the sleeping princesses. "The tension of the performance is in the seductiveness and fear of the ultimate moment," describes the exhibit's press release. "The viewer will have to think twice before kissing the Beauty. The Beauty will have to decide if the ultimate moment has come or not. The show will end the moment the Beauty opens her eyes." 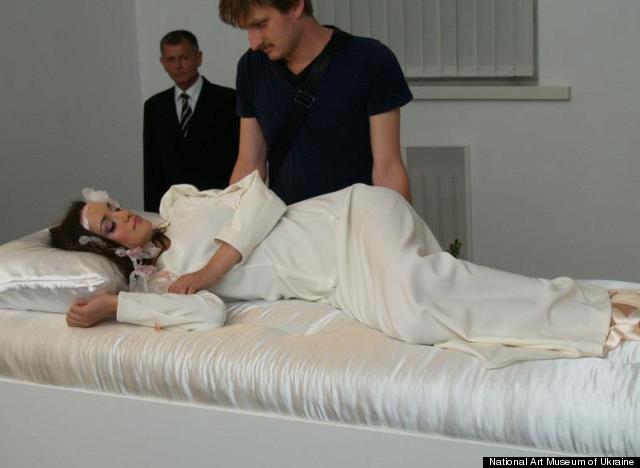 The "Sleeping Beauty" exhibit almost experienced its own unhappy ending in the run-up to its opening, when the artist Polataiko was called to the museum director's office and told by the Ukrainian Ministry of Culture that he would be forced to shut down his work. Polataiko recounted the attempted censorship on his Facebook page, stating that the ministry provided no reason behind their disapproval and later likened the situation to "a return to totalitarianism."

The disagreement was later worked out in meetings between the ministry and the museum. Nataliia Mykhailova, a public relations representative at the museum, confirmed the Ministry of Culture's intervention, stating in an email to the Huffington Post: "We really had some difficulties, but now it is all arranged and the exhibition is working as planned."

The museum has a history of experiencing resistance on the part of the Ukrainian government, as a serpentine installation erected on the exterior of the museum earlier this summer was almost halted after officials claimed the material was flammable.

Let us know what you think of the "Sleeping Beauty" exhibit in the comments section. Would you volunteer to act out the fairy tale?

See the most iconic public kisses in the slideshow below: