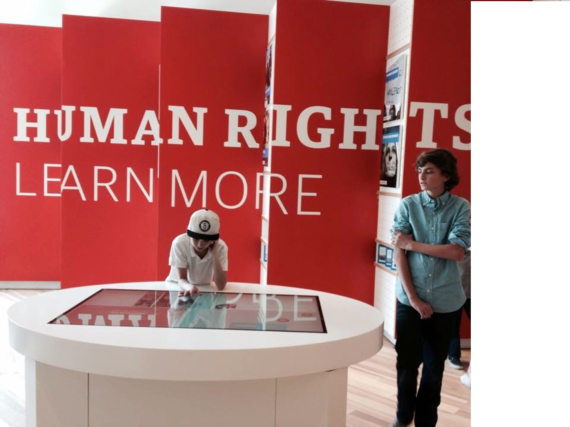 On a recent walk-through of the new National Center for Civil and Human Rights (NCCHR) in Atlanta, CEO Doug Shipman looked at the group of social justice activists and their families -- all spread across the gallery and engaged in one display or another -- and said, "This is it right here -- skim, swim or dive. There's content for every type of audience."

My children were among the "skimmers." Buzzing on sugar from the all-you-can-drink tasting room at the World of Coca-Cola next door, they stood gazing up at a life-size "villain" Idi Amin, the late brutal despot of Uganda, and "defender" Dr. Denis Mukwege of the Congo, a leading voice on ending violence against women in times of armed conflict.

For 10 minutes they watched and re-watched footage of Walter Cronkite announcing the death of Dr. Martin Luther King Jr. on national television, as well as Attorney General Robert F. Kennedy urging an assembled crowd in Indianapolis just learning of Dr. King's assassination to resist violence and seek unity and justice.

The "swimmers" in our group followed the Center's ebb and flow -- making their way from the ground floor where a rotating selection of Dr. King's private papers are displayed, to the galleries and exhibitions telling the story of the U.S. civil rights movement on the second floor, to the top level with its openly-designed 6,000 square feet focused on global human rights.

"Divers" were intent on drawing deeper connections between the legacy of the 20th century American civil rights movement and contemporary efforts to ensure universal human rights for all. One panel contains scenes from a civil rights-era graphic comic booklet of Dr. Martin Luther King, Jr.'s life, aimed at introducing non-violent resistance to a low-literacy audience. In recent years, the publication has been translated into Arabic and Farsi and distributed by activists throughout the Middle East.

Those with a scholarly bent stood before the re-creation of Dr. King's bookcase noting that they, too, would like to read When People Behave Like Sputniks by civil rights activist and Baptist minister Thomas E. Huntley or Gandhi's My Religion.

"We hope these exhibits will show how individuals can make a difference by banding together to protect human dignity," says Jill Savitt, curator of the NCCHR's human rights exhibit. "By telling the story of human rights in words, photos, videos and with dynamic interactive experiences, we're hoping to attract people of all ages, backgrounds and levels of understanding, and make them want to learn more."

Indeed, that was the experience of one child "skimmer," on his way to taking a deeper plunge.

Near the end of the tour stands an exhibit linking our personal buying choices with the situation for workers around the world. "The world loves soccer, but what about fair play?" headlines one panel.

It turns out that many soccer balls are hand-stitched by children who work long hours at home instead of attending school. "Consumer demand is essential," the display prompts. "Schools, soccer leagues, and individuals can reach out to soccer ball manufacturers urging them to make protecting children's and worker's rights a goal for the sport."

"Did you know that, Mom?" the boy asked. "What about the World Cup soccer balls? How are they made?"

Beginning June 23, the National Center for Civil and Human Rights will be open from 10 a.m.-5 p.m. seven days a week (excluding Thanksgiving and Christmas). Tickets may be purchased on-line at www.civilandhumanrights.org/ or in-person at the main entrance on Pemberton Place.