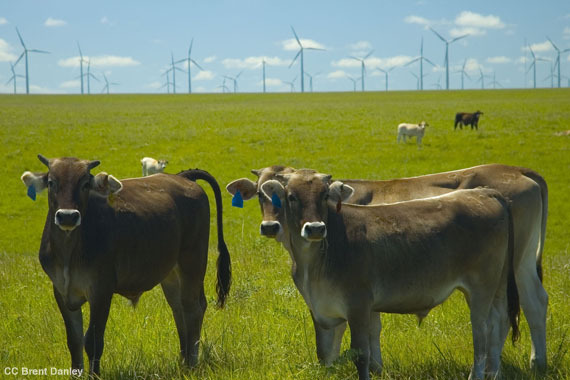 The May 6 release of the third National Climate Assessment has the press buzzing. The federally mandated report, compiled by more than 200 leading scientists and based on years of research, confirms the recent United Nations report (from the Intergovernmental Panel on Climate Change), which shows that humans are responsible for the greenhouse gas emissions warming the planet at an unprecedented rate. Animal agriculture is one of the top contributors to global warming as well as animal suffering and many human health threats. And that is why the Animal Legal Defense Fund recognizes the interconnection of animal well-being with environmental concerns and is working to build coalitions to fight this growing threat to our planet.

The consequences of climate change -- like rising sea levels and extreme weather events -- are already worse than projected. As a result, the report predicts that we will all feel the impact of climate change within our lifetimes. From devastating droughts and floods to coastal erosion, economic adversity, (including higher insurance premiums and increased heating and cooling costs), and the extinction of myriad species, the report is sobering, to put it mildly.

This is why coalition building is so important -- ALDF has united with groups like the Center for Biological Diversity, Center for Food Safety, the ACLU, and numerous other environmental groups, labor unions, law enforcement agencies, and civil rights groups to solve these problems. Industrial agriculture -- the "factory farming" of cows, chickens and pigs -- accounts for nearly 20% of greenhouse gas emissions, more than all forms of transportation combined! Without addressing the contribution of animal agriculture to climate change, we are merely slapping band aids on bullet holes. In addition, there is no doubt that animal agriculture -- by the sheer numbers -- is the leading cause of cruelty to animals.

The lack of any federal laws to protect farmed animals from cruelty and the lack of enforcement of state anti-cruelty laws enable factory farms to exist, thus bolstering the environmental destruction wrought by factory farming. Likewise, legal exemptions that allow pollution from animal agriculture to go unregulated, and antibiotics and other drugs to speed growth, foster horrendous overcrowding and abuse of animals. Clearly, environmental and animal protection groups must work together to stop the wreckage left by industrial agriculture.

That's why the Animal Legal Defense Fund takes on legal issues that arise from factory farming, like unconstitutional laws known as "ag gag" laws that target whistle-blowers who bring light to illegal animal cruelty, and our legal petition that addresses the rampant use of antibiotics for animals who aren't sick and which is associated with antibiotic-resistant bacteria and may become one of the leading health crises of the twenty-first century.

What can we do? There are many ways we can all do our part to fight climate change, including driving less often, purchasing more fuel efficient cars and energy efficient appliances, even investing in alternative energy sources like solar and wind power. But the number one way to impact and mitigate climate change -- even more than changing our fuel economy and going "green" -- is changing the way we eat. Eating that burger, that pork chop, or that chicken wing is contributing to global warming in an alarming way. By reducing or eliminating our consumption of animal products, we can impact the future of our planet and eliminate tremendous animal suffering.

But, ultimately, it will take all of these solutions. We must change our thinking -- and our impact upon the planet -- because the challenges facing our immediate and long-term future are enormous. It will take the combined efforts of animal, environmental, and health advocates and organizations to meet this challenge. By protecting animals we are also protecting the planet and saving ourselves. For more information please visit ALDF.org.