As I wrote in a previous post on Franklin Graham and the National Day of Prayer, the victory of the Military Religious Freedom Foundation (MRFF) in getting the Pentagon to rescind its invitation to Graham was due only in part to his virulently anti-Muslim statements. Even if Graham had never uttered a single disparaging word against the religion of Islam, his invitation to speak at the Pentagon National Day of Prayer event would still have been in violation of Department of Defense regulations.

Graham was this year's honorary chairman of the National Day of Prayer Task Force (NDPTF), a private organization that, despite projecting an appearance of official-ness, has no official connection whatsoever to National Day of Prayer. The Pentagon had invited Graham specifically because he was the NDPTF honorary chairman, continuing what has become a regular practice of inviting the NDPTF honorary chairman to speak. The entire Pentagon event had been promoted as an NDPTF event, using the NDPTF logo and other graphics. All of this violated the DoD regulations that strictly prohibit the U.S. military from endorsing or granting a "selective benefit or preferential treatment" to a private organization (or "non-federal entity"). Without the solid ground that these regulations put MRFF on in its demand that Graham be disinvited, he might very well have been kept as the Pentagon's NDP event speaker.

As shown in the video below, the Capitol Hill NDPTF event was opened by the Joint Armed Forces Color Guard; an ensemble from the U.S. Army Band was there; and two active duty U.S. military officers, Army chaplain Colonel Douglas Castle and Rear Admiral Lawrence Rice, the U.S. Navy's director of strategy and policy, flaunted their blatant disregard of military regulations by appearing in uniform as speakers.

Chaplain Castle not only appeared in uniform but also spoke for several minutes about the particular uniform he had decided to wear that day, explaining that the lord had told him to wear his ACUs (or fatigues) rather than his dress uniform. (Apparently, the lord didn't see fit to remind the good colonel that appearing in any military uniform at such an event was a violation of military regulations.)

Also of note is that Focus on the Family founder James Dobson, in his introduction of Rear Admiral Rice, recounted the story of how he first met Rice in 2007, when Rice flew him, his wife Shirley (who heads the NDPTF), and eight of their guests in a military jet to land on the U.S.S. Enterprise, a trip presumably taken at taxpayer expense.

Because the NDPTF partnered with GOD TV, a "ministry" whose mission is to "enable every television household to hear the gospel of Jesus Christ so that they may believe in Him, call upon His name, and be saved," to broadcast its Capitol Hill event to more than 200 countries, people all over the world got to see the U.S. military endorsing this extravaganza of Christian supremacy. In addition to the NDPTF logo and other NDPTF graphics displayed behind the podium, the GOD TV logo and website information appeared throughout the broadcast, resulting in the military's promotion of a second non-federal entity.

At this high-profile event, viewed by millions of people around the world, James Dobson also talked a bit about MRFF founder and president Mikey Weinstein. (We sincerely thank you, Dr. Dobson, for acknowledging MRFF's success to such a large audience.)

The Capitol Hill event wasn't the only NDPTF event at which military regulations were violated. Many other NDPTF events around the country had military color guards, military chaplains, and military musicians. (It doesn't appear that they tried to get away with having any military flyovers this year, so we're making progress.)

Here's a Marine color guard at an event in Olympia, Washington: 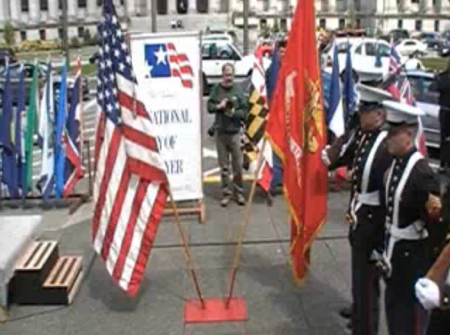 And a joint service color guard at an event in Las Vegas, at which a uniformed Air Force chaplain also spoke: 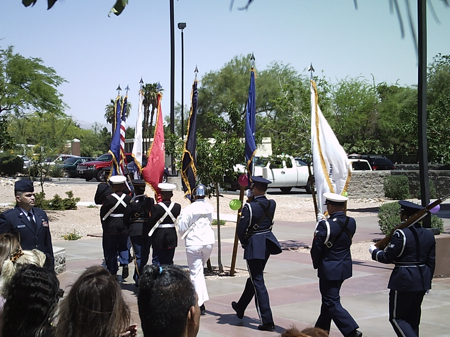 The numerous violations that occurred at the NDPTF Capitol Hill event and other NDPTF events around the country included the violation of the U.S. military's Joint Ethics Regulation (DoD 5500.7-R), which prohibits the endorsement of a non-federal entity (Section 3-209); DoD Instruction 5410.19, which prohibits the providing of a selective benefit or preferential treatment to any private organization (Sections 6.7.1 and 6.7.2), as well as various branch specific regulations regarding both uniform wear and endorsements of private organizations. To give an example of just how explicit these regulations are, here's what the Army's version of the prohibition on endorsement of private organizations (AR 360-1, Section 3-2.b.) states: "Public affairs activities will not support any event involving (or appearing to involve) the promotion, endorsement, or sponsorship of any individual, civilian enterprise, religious or sectarian movement, organization, ideological movement, or political campaign." The section on "selective benefit" lists "religion, sect, religious or sectarian group, or quasi-religious or ideological movement" among the types of entities that "Army participation must not selectively benefit (or appear to benefit)."