The National Enquirer has published a photo of Whitney Houston in an open coffin on the cover of this week's issue.

The unauthorized picture shows Houston lying in a golden coffin, and wearing a purple dress. It is accompanied by the headline, "WHITNEY: THE LAST PHOTO!"

According to the Daily Mail, the National Enquirer claims the photo was taken at Whigham Funeral Home in Newark, New Jersey. The tabloid did not specify who took the picture, which has provoked shock on Twitter.

Members of Houston's family attended a private wake at the funeral home last Friday. Over 1,000 friends and relatives, including Oprah Winfrey and Mariah Carey, gathered for a larger service for the pop legend the next day. Houston was found unresponsive in the Beverly Hilton on the eve of the Grammy Awards. She died at the age of 48.

It is not the first time a publication splashed such a graphic photo on the front page. Newspapers published an image of Michael Jackson on his deathbed when his former physician Dr. Conrad Murray was on trial.

Click through to GossipDavid to see the National Enquirer's Whitney Houston cover. 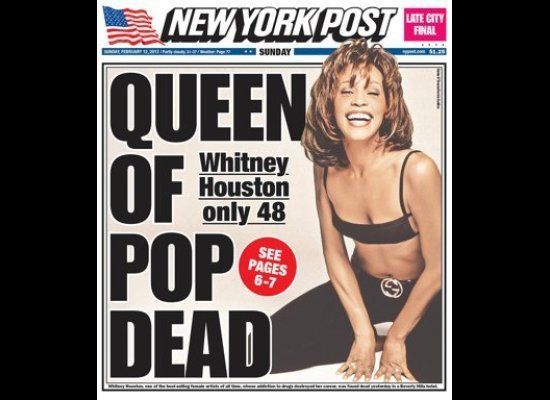