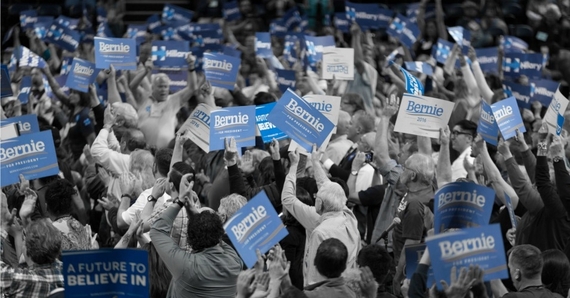 And that violence was used as proof -- by the AP, CBS, MSNBC, CNN, NPR, and all the others -- that Sanders supporters are no different from Trump supporters and therefore Sanders should exit the Democratic race immediately.

If there's a better example of Noam Chomsky's contention that the media uses propaganda -- propaganda with a specific end in mind -- to shift reality, and then doesn't undo the damage they've done when they're caught, I can't think of one.

Even the Democratic National Committee -- "neutral" in the Democratic primary -- joined the fray, adding its voice to the major-media chorus singing Bernie Sanders' swan song.

Barbara Boxer -- who claimed she feared for her safety in Nevada -- was subsequently shown in a video contemptuously and facetiously blowing kisses to the crowd as she was calmly escorted from the stage by the very same police officers who'd been in the room the whole time and not observed any violence whatsoever.

So of course, when video evidence showed Boxer having the time of her life trolling Sanders supporters ("Boo yourselves right out of the election!" she taunted from her perch at the convention's main podium), and when the video of her kiss-blowing was disclosed, the major media immediately came out and retracted its earlier reporting about Boxer.

And more importantly it retracted, too, its claims about "chair-throwing" -- which, by the admission of CNN's Anderson Cooper on-air, was the only evidence of "violence" at the convention itself that the media had ever gathered.

How do we know that the entire national media retracted its claims that Sanders supporters committed acts of violence on the convention floor in Nevada? And that therefore the master narrative that lay behind that reporting -- that it was time for Sanders to get out of the race because his movement had become disgraceful -- in fact could draw no comfort from the events in Nevada? And how do we know that major-media reporting to the effect that Nevada State Democratic Party Chair Roberta Lange had followed all existing rules at the Nevada convention, which like all the other claims mentioned above was later proven false by video evidence, was later retracted?

It's simple: because as I teach my undergraduates in Journalism 101, a media organization that fails to retract false reporting cannot be considered a media organization in conventional terms -- that is, as it cannot be said to be undergirded by the pillars of journalism (objectivity, accuracy, fairness, and transparency) it is now something other than a news organization. A conglomerate of editorialists? Sure. But not an agency committed to that discrete element of journalistic practice we know as hard news reportage.

And so, because the AP, CBS, MSNBC, CNN, and NPR are all still regarded as news organizations, we can be certain that after Scopes and the Ombudsman for National Public Radio conclusively disproved the allegations of violence at Nevada's state Democratic convention, all of those media organizations on-air or in print retracted their earlier reporting. One needn't even look into the question of whether this happened or not; deductively, it must have happened because the reporting in question was of a national character and profile and these media organizations not only still exist as media organizations but have come under no public scrutiny from other media organizations for having originally misreported the events in Nevada. That could only happen, if we take journalism (as a discipline) at its word, if all of the Nevada reporting has by now been loudly and clearly retracted by these media outlets.

Note that I don't speak, here, of individual acts of malfeasance.

For instance, mere minutes after Jeff Weaver went on CNN and seven times in a row condemned the off-site actions of self-described (but unconfirmed) Sanders "supporters" largely from -- as Rolling Stone reported -- outside Nevada, Bakari Sellers, a Clinton surrogate, clearly stated on CNN's air that Weaver had "refused to condemn" the violence. This is the reason Sellers was immediately removed from all future panels on CNN -- because he never issued a retraction. I don't have to go online to confirm that Sellers is gone, because what I do know for certain is that (a) he never issued a retraction, (b) he made his statements as part of a larger argument implying that the Sanders campaign had committed felonies (as inciting violence is indeed a felony), and (c) no media organization would retain the services of a pundit who accused public individuals of major felonies contrary to evidence aired on that same media organization's air without -- assuming no retraction -- immediately thereafter firing that pundit.

By the same token, we can be certain that either no news organizations reported that the risible phone calls made to Roberta Lange were made by Sanders supporters, or that every time these calls were referenced the phrase "self-described but unconfirmed Sanders supporters" was appended, lest this coverage too require an immediate retraction. As we know, no news organization would lay at the doorstep of a political campaign actions taken by individuals who news organization had not independently confirmed were in some way connected with that campaign. Which is why it's such a relief to those of us who care about journalism -- not just the editorializing I myself do but the hard news reporting other journalists do -- that nothing of the sort happened here.

This is also why we can be certain that, despite reports to the contrary, there is absolutely no chance that the national media will declare that Hillary Clinton has "clinched the Democratic nomination" or is the "presumptive Democratic nominee" at any point during the day of June 7th. We know this because (a) the Democratic National Committee, the final authority on that issue, has explicitly told the media that super-delegates cannot be tallied or used in reporting until they cast their ballots in late July, and (b) Hillary Clinton cannot earn enough pledged delegates on June 7th to clinch the Democratic nomination via pledged delegates unless she wins a laughably astronomical percentage of the delegates awarded on that day -- well over 80%.

So when Mark Murray, the Senior Editor for NBC Politics, implied to me during a conversation that NBC was indeed one of the media organizations Chris Matthews now says is planning to call the race for Clinton on June 7th, I don't doubt for a moment he was having me on. Otherwise, he'd be stating well in advance a plan to "make" the news rather than "report" it. I have much more faith in him than to think that -- rather, I think he's merely being a bit of a card. A cut-up. A media organization would be effectively committing suicide if it called a presidential race too early -- especially after what the national media did, with no consequences whatsoever, in 2000 -- so it's unthinkable that that same mistake would be made again.

Ultimately, we can editorialize the news from the perspective of the world as it ought to be -- or already claims to be -- or we can not report hardly any of the news from the world as it is (while on occasion misreporting and never correctly reporting the news as it happens). Both options are deeply flawed, but on the whole the former is profoundly preferable and so I proudly choose it.