It's not National Poetry Month without a columnist penning a piece declaring that poetry is dead.

The predictable appearance of these articles is almost comical. The press has been picking on American poetry for at least 125 years, and the arguments are always the same: no one buys poetry, no one reads poetry, and poets are to blame.

The Daily Alta California newspaper reprinted the following story from the London Saturday Review on May 19, 1890:

In America there seems to be a boom in poets. It has not yet reached the smaller holders, who find purchasers backward and prices still ruling low. The budget of a minor poet in active practice was lately published in the press, and, if we remember correctly, thirty shillings was about the quoted prices for the average effusion. Broken hearts, sunsets, spring, the grave, are certainly cheap at this rate; but it is to point out that the public consumption is almost nil, while the output of poetry is enormous.

And, here's a gem from the August 9, 1902 New York Times Saturday Review of Books and Art:

There is no anodyne like poetry, say many cultivated readers. Poetry is a drug in the market, say the booksellers. They do not mean the same thing. There can be no doubt that at present no shrewd investor will 'take much stock' in poetry. In the course of an article in The Young Man, the Rev. W.J. Dawson -- himself a poet and critic of repute -- reports a recent conversation with a young and enterprising publisher, who told him that in five years he had been able to sell 130 copies only of a certain volume of exquisite poems which had received the highest praise from the reviewers.... Perhaps something may be due to the fact that the average modern poet does not strike the note of sincerity and intensity that we find in whatever survives of the poetry of earlier generations.

But columnists and reporters who insist that no one cares about poetry and that no one knows about National Poetry Month, haven't joined the rest of us online.

Google "National Poetry Month" or search for #nationalpoetrymonth, #npm15, or  #pocketpoem on Twitter and you will quickly gain some sense of the wide-range of events taking place: from banners on streetlights in West Hollywood featuring poets, to events like the Barrio Barista: Open Poetry Night in San Antonio; from a month-long celebration of local poets in Wisconsin to poetry cruises and contests in Miami; from Poem City in Vermont, to the many poets writing poems in April as part of NaPoWriMo... Not only have people heard of National Poetry Month, the number of poetry projects and programs taking place in April, makes it the largest literary celebration in the world.

Beyond April's activities, poetry and poetic practice in the U.S. has never been more vibrant and more diverse. This is cause for celebration, not a death knell.

There is a talented multitude of American poets writing today -- a complex chorus of voices addressing a fascinating range of subjects in a variety of modes. American poets today, especially younger poets, seem comfortable working beyond binaries and with a greater appreciation for fluidity and genre blurring in their poems.

Poets who had focused on publishing in print, are now making videos and podcasts of their work. Poets who came of age on the slam stage are publishing books. Poets have seized the fact that poems are highly shareable art objects. They fit nicely on smart phones, and many poets are posting photographs of poems on social media channels. Thanks to digital platforms, the walls between poets, and poets and their readers, have never been more porous. We follow each other. We appear in each other's feeds.

But poetry is having a blended renaissance. The poetry ecology is blooming across the U.S., online and off.

Librarians have worked to make their institutions places where poetry lives year-round by hosting poetry readings and workshops for general audiences, including individuals who might not have regular access to technology.

A growing number of librarians, often in collaboration with local arts councils, have launched local poet laureate positions, celebrating the role of poets and importance of poetry in their communities. In the past five years alone, more than 40 cities and towns have created such posts, doubling the number nationwide in recent years.

On a parallel track, the youth poetry organization Urban Word over the past few years has established Youth Poet Laureate positions in 30 cities nationwide.

In this same period, the Scholastic Art & Writing Awards, with the Institute for Museum and Library Services, and the President's Committee on the Arts and Humanities launched the National Student Poets program, to honor five young poets in different regions in the U.S. each year.

And the number of students participating in the poetry memorization and recitation contest, Poetry Out Loud, founded by the National Endowment for the Arts and the Poetry Foundation in 2006, has to continue to climb annually with an astounding 350,000+ teens participating in 2014.

At the Academy of American Poets, in the past three years, 40,000 students have watched our Dear Poet project videos and nearly 3,000 have written poems and letters sent to the 15 esteemed poets who serve as our organization's Chancellors in response. These students speak profoundly about the impact of poetry on young people's lives.

One student, Chelsei, a high school senior from Florida, wrote, "Poetry has become an exceptional part of my life... I have realized that poets are epicures of the English language."

And, Alex, a high school freshman from northern Michigan, wrote: "Living in a small town doesn't lead to much exposure and we (my fellow poets and I) often find ourselves seeking out poems in unusual places. The work that the many other poets out there are doing is giving students like me an opportunity to experience this world though a different lens."

One of this year's National Student Poets, Madeleine LeCense, an 18 year-old from New Orleans, describes poetry as "the art of getting lost. Getting lost and going along with it, being okay with not knowing where you're going."

Madeleine had the honor of introducing President Obama at a White House celebration of National Poetry Month held on April 17, 2015, which she did noting that he was a "former teen poet."
It's not every day the holder of the highest office in the U.S. admits to writing poems and takes a moment to reflect on the importance of poets to our country. He said:

(You can read the rest of his remarks, and those by the First Lady here.)

His words seem to echo those of the poet Muriel Rukeyser who wrote, "If there were no poetry on any day in the world, poetry would be invented that day. For there would be an intolerable hunger."

Indeed, one of poetry's possibilities is that it can provide the words we need to understand our lives, struggles, and the times we live in.

"O, let America be America again--
The land that never has been yet--
And yet must be--the land where every man is free."

Poets interpret emotional landscapes, and we turn to their art for a distillation of truth we can hold like a mantra in our minds. Poems exist beyond the noise of the everyday, and when we read and reflect on them, we move closer to our humanity. Poems root in us.

"Two roads diverged in a wood, and I--
I took the one less traveled by
And that has made all the difference."

Some of our poets embrace those readers looking for revelatory images and ideas, and beauty in poems. Other poets focus instead on testing and reimagining language.

As dancers demonstrate the surprising range of what the body can express, poets reflect and contort using language. We need poets' work to describe ourselves to ourselves, and challenge the material of everyday communication to function in new and innovative ways, shaping syntax into something memorable and lasting.

Yet, every April columnists come calling with their hoods and scythes. Why?

Perhaps because much of poetry exists outside of the marketplace as part of a gift economy. Many poems are shared freely. And, if cultural value is determined by commercial value, poetry loses.

And, much of poetry's making and enjoyment takes place in solitary settings, not stadium-style seating. This can make it challenging to demonstrate the existence and engagement of poetry's audience.

Or perhaps it dials all the way back to Plato's exiling poets from his ideal city. Poets are dangerous.

In one of the most recent anti-poetry articles, "Poetry is going extinct, government data show," published in the April 24, 2015 Washington Post, reporter Christopher Ingraham points to the Survey of Public Participation in the Arts (SPPA), which was conducted as part of the Census Bureau's Current Population Survey in 2012. The study concludes that, "Since 2002, the share of poetry-readers has contracted by 45 percent -- resulting in the steepest decline in participation in any literary genre."

It's worth spending some time with this survey and its questionnaire.

And not all the results are bleak. Toward the positive for poetry, the survey notes that more adults experience books, short stories or poetry read aloud on the Internet than those experiencing opera, ballet, dance other than ballet, or theatre. And, that more adults have taken creative writing classes in or out of school than music appreciation, photography or filmmaking, and acting or theatre classes.

And, obviously, the survey doesn't capture the past three years. During this time (2012-2015), at the Academy of American Poets, we've seen an increase in people's engagement with poetry online. In the past 12 months alone, the number of subscribers to our Poem-a-Day series, which is the first place of publication for 260 of today's poets each year, has grown by almost 45 percent -- from 80,000 to 115,000+ individuals receiving new poems each morning. Through social media and syndication, these poems reach an additional 200,000 readers.

In his Washington Post piece, Mr. Ingraham also notes that, "since 2004, the share of all Google searches involving 'poetry' has fallen precipitously."

However, if you use the search term "poem" instead of "poetry" you'll see a much higher representation of interest: 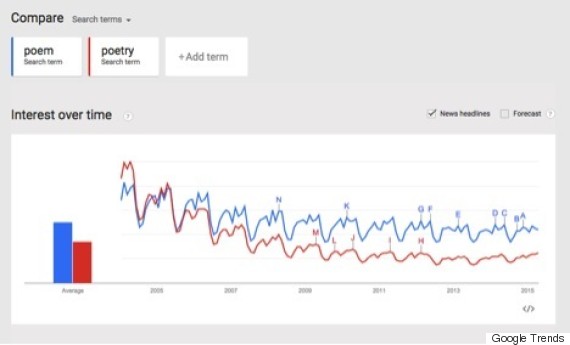 You can try it yourself here.

That said, we can't completely ignore or challenge trends. Poetry has always had a small, but deeply devoted audience. As people prioritize visual literacy, poetry's audience could be negatively impacted.

A smaller audience for poetry doesn't serve poets, poetry publishers, and those readers of all ages who could benefit from more poems in their lives. And, more people reading poems might make for a gentler, more just present.