On November 6 of this year, the 6th Circuit Court of Appeals voted 2-1 in DeBoer v. Snyder, 2014 U.S. App. LEXIS 21191, 2014 Westlaw 5748990, to reverse the marriage equality decisions from Michigan, Ohio, Kentucky and Tennessee. This created a split from the other circuits which will most certainly provoke review from the Supreme Court of the United States; just one month previously, the High Court turned down petitions from five states in three different circuits which effectively made same-sex marriage legal in those states.

So incredibly rapid has been the string of legal victories involving gay rights in 2014 that it's hard, especially for young people, to envision the world of only 30 or 40 years ago when being gay was defined as a psychiatric abnormality and sodomy laws provided a fortress to defend American values from the "perversion" of homosexuality. Like so many people my age, those of us who came of age in the late 1970s and early 1980s, we were already out in private -- among friends, at parties, the braver of us twenty-somethings dipping our toes into that glamorous sand at Fire Island -- but coming out professionally was a whole different matter, and it seemed almost dangerous to discuss being gay at work.

No one who knows me now would ever accuse me of being shy, but when I was a law student at Brooklyn Law School in the late 1970s, I attended a meeting of newly-formed group of gay lawyers and gay students with great trepidation, fearful that my budding career would be jeopardized if I was known as gay. I still remember going there, my knees actually quavering, my hands in my pockets, only to be confronted by a leader of this group, a man named Arthur Leonard, who, as it turned out, was only a few years older than me. Even though he was still in his late twenties, Leonard was already a civil rights activist, out and proud, dreaming of a day when gay men and women would have equal civil rights. He was so passionate and confident that he was -- from that very first day -- instrumental in my own, and doubtlessly others, coming out as a young lawyer.

But today when you follow the headlines, you hear of famous gay actors and actresses, and even powerful straight lawyers who have made it their cause to bring gay marriage to the land. Having a gay character on a television show is now almost obligatory, and the Obama administration's crowning achievement may not be in race relations, which remain deeply troubling and divisive, but in gay rights. Who would have thought?

But as we celebrate all these celebrities and lawyers and famous gay advocates, it's so important, I feel, especially in this year when national gay marriage is so tantalizingly close to fruition, not to forget those genuine pioneers, people like Arthur S. Leonard, who were there almost before anyone else. And as 2014 is winding down, thinking of how difficult it was way back then, I was determined to get in touch with this man, unheralded to all but those already in gay civil rights, who had set a path from which all of us now benefit.

Many students and practitioners of gay civil rights law consider Professor Arthur S. Leonard to be the leading expert in LGBT legal history and precedent. A product of Cornell University and Harvard Law School, he worked at two white shoe law firms for five years before becoming a Professor of Law at New York Law School.

However, most people outside of the gay legal community have never heard of him. However, in my view, Professor Leonard is an unsung civil rights hero. Therefore, almost 40 years later, I decided to find this man to learn more about his views; in particular, his take regarding the future of the federal state of the law regarding same-sex marriage. Will marriage equality become the law of the land? And if so, when?

This past weekend I had the privilege of brunching with him, his husband and a good friend around the corner from his residence at the Fairway Market on Broadway in Manhattan's Upper West Side. Professor Leonard stated unequivocally that the Supreme Court of the United States would resolve the current conflict among the various Circuit courts during the upcoming term, probably in June, 2015. He predicts with "overwhelming certainty" that the Justices will rule at least 5-4 in our favor. He boldly went on to say that the vote may even be 6-3, with Justice Roberts joining the fray for marriage equality.

Leonard has also been the editor-in-chief of Lesbian/Gay Law Notes since 1980.

What is so extraordinary Leonard's story, what makes him so much a truly unsung civil rights hero, is that he has been assiduously, faithfully following and chronicling gay legal decisions since the 1970s. Almost every day he researches the judicial opinions from all over the country and even some international cases that involve lesbian and gay sexuality. Using WestLaw and Lexis, he conducts an exhaustive search for the cases and articles relevant to his passion -- sexuality and the law.

He regularly blogs on all legal developments relevant to our community. His impressive resume includes 90 or so scholarly articles on sexuality, LGBT issues and AIDS/HIV, and dozens of keynote speaking engagements and awards.

Professor Leonard pointed out that same-sex marriage is currently legally blessed in 35 states that comprise over 60 percent of the population of the United States. He opined that if someone had told us this fact a mere two years ago, we would have laughed at this as an impossibility.

Leonard and his husband, Timothy Nenno, first met in 1979 and within weeks were cohabiting. When the Connecticut Supreme Court ruled in favor of same-sex marriage in 2008, and the New York appellate courts had begun to recognize same-sex marriages from out of state, the couple decided that it was time to get married. Since they had been together almost 30 years at that point, they decided that it was "not worth making a big fuss about it," so they just "decided to elope and let their friends and family know afterwards." Nenno did some research and made an appointment with a Justice of the Peace in Greenwich to perform a civil ceremony. Arthur let his niece, who was then a student at Vassar, know about it, and she asked to join them for the big day. So the three of them took MetroNorth to their ceremony on March 30, 2009, exactly 30 years to the day of their first having met. After the ceremony, Arthur called his mom, the mother of three sons, and told her, "I've given you something you've never expected: a son-in-law!"

After New York State enacted marriage equality in 2011, Arthur and Tim encountered the brave new world of preparing their income tax returns together for the first time, which according to Arthur "was an adventure in itself."

After our brunch, I visited with the couple at their apartment. The smell of old books and fine furniture permeated their spacious abode. Beside his passion for LGBT law, he is an avid classical music fan. On the bookshelves across from thousands of legal tomes are approximately 23,000 classical music CDs. Each weekend he attends classical music concerts. Every morning he works out at the gym doing cardio and weights. 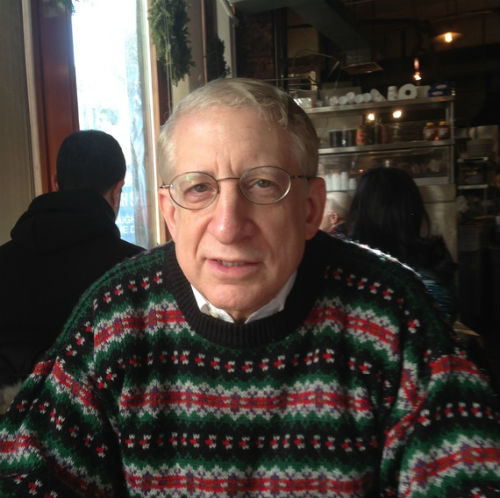 Arthur is a bright-eyed, spry 63-year-old charismatic gentleman. I found myself a bit turned on by his deep intelligence eloquently expressed through his articulate discussions of the law and his recounting of experiences in underground gay scenes in Kazakhstan and elsewhere.

We verily hope, pray and believe that the Professor Leonard's bold assertion that same-sex marriage will become the law of the land next year will come to pass. It is my prediction that Professor Leonard is right. The United States of America will finally recognize that love transcends gender.