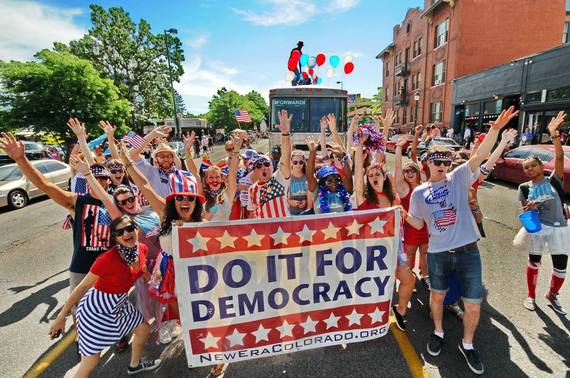 But a really important one is National Voter Registration Day, set this year for Tuesday, September 27, 2016.

"One goal of the campaign," said Matt Singer, founder of National Voter Registration Day, is to "empower more people to enter the democracy." It's a one-day outreach extravaganza, designed to register as many as tens of thousands of voters across the United States, in person and online, and to raise awareness of this basic procedure that's so fundamental to the democratic workings of our country.

Is a massive voter registration drive important in the 2016 election year? Absolutely. The nonprofit campaign points out that

"in 2008, 6 million Americans didn't vote because they missed a registration deadline or didn't know how to register."

This year, "there are hundreds of organizations on the ground-- in schools, college campuses, retail stores and libraries, concerts and major transit hubs, along with musicians, actors, directors and influencers using their social media channels to raise awareness about voter registration," said Singer in a phone interview on September 21st, a week before the event.

If you've never heard of it, that's likely because National Voter Registration Day is relatively new. Launched in 2012, it is now riding only its second-ever presidential campaign wave, with a coordinated grassroots, digital, and media effort this year involving some 2500 partner organizations around the country.

You can register online. Or, to find a place to register near you, go to the National Voter Registration Day website and plug in your zip code. Events are being held in places you might not expect. For instance, over two dozen of Patagonia's stores will host Vote Our Planet education and voter registration events. Starbucks is participating in some locations. Chicago Votes will be registering voters at Daley Plaza with music, food. New York City's Lincoln Center will feature a "Party with a Purpose" National Voter Registration Day event with life performances and ShoBoy of AMP 92.3 radio host; NC Votes will register voters.

Tech giants Google and Twitter, YouTube, Microsoft, Etsy, and FourSquare are involved. So are Univision, MTV, and Video Game Voters Network, all helping to bring this once pen-and-paper registration process into the wired world.

Groups such as the Korean Resource Center help reach out to the immigrant citizen community as well.

The League of Women Voters, Rock the Vote, and other voter registration heavyweights are engaged, too.

National Voter Registration Day is held on the fourth Tuesday of September by resolution of the National Association of Secretaries of State. It is scheduled intentionally to take place prior to all state voting registration deadlines, which can vary.

"Every election, millions of Americans cannot cast a ballot because they do not know how to register or missed their local registration deadlines," says the campaign.

Singer, the organization's founder, is a blogger and serial social entrepreneur (and, he says, a three-time college dropout). A Montana-born resident of Portland, Oregon, he also runs a youth-oriented civic and voter engagement organization called the Bus Federation Civic Fund.

Check Your Own Registration
Raising awareness of voter registration is useful for all kinds of people new voters, new citizens, and those who just forgot to change or update their registration.

"The most misunderstood part of the voter registration process is that you need to keep your registration up to date," said Singer. "It's like keeping your driver's license up to date. If you haven't voted in a few years, have moved, or changed your name - you have to update your voter registration, too. It only takes two minutes."

Voter Registration At A Glance

And, once you've registered, don't forget to vote!