When I came to faith at age 19, I learned to ignore my ethnic heritage because I was told it was "of the flesh." My experience is consistent with the colonial history of those living in a land where the dominant culture is associated with one particular faith tradition. Because Euro-Americans contextualized their Christian faith so well (see, for example, the White Jesus on the wall of First Church of Anytown, USA), Euro-Americans became confused over what was faith and what was culture.

The resulting enmeshment of Christianity and Euro-American civilization was the decision that all native religious ceremonies and many cultural practices be outlawed. For almost 100 years, in the name of progress, Native children were forced into government-sponsored, denominationally run boarding schools where many were abused physically, sexually, emotionally and spiritually, and where many of them died. The rallying cry to civilize/Christianize Indigenous children was "kill the Indian, save the child."

Even today, most mission-sending agencies don't deal with cultural distinctions well. Often, everything that does not fit into Euro-American ideas of "Christian culture" is seen as suspect, or even branded "demonic." This confusion was passed on to our Indian people and as a result, most Indigenous churches simply began to mimic the Euro-American cultural standard. It was a poor imitation of a bad model.

If most Americans knew the depths of degradation Native people have gone through at the hands of the U.S. Government and the Church, they would be in profound disbelief that any Indian would ever become a Christian. The disbelief, in fact, runs on both sides; some American aboriginals today view Native Christians as traitors.

But then there is the other reality of Indian life: Indians are normally forgiving people and many really like Jesus in spite of the kind of Christianity presented to them. Authentic traditional elders I knew years ago -- the real elders of the people -- were tolerant and kind to everyone. They knew there was only one God the Creator, call him what you will, to hear our prayers. These elders were often much better at the practice of Christian life, even without formal Christian training and dogma, than the missionaries who tried to convert them.

The missionaries did a real number on Native Americans by preventing us from expressing our devotion to Jesus through our own cultures. Those who condemned our cultures simply taught us to hate ourselves and, in the end, to hate God for making us Indian. Unfortunately they were reflecting the ethnocentric and racist cultural standard of their day. Clearly, not all missionaries were evil. There have always been a few people of faith who thought and acted in ways ahead of their time.

Back in the mid-1980s, I spent three years in seminary trying to find alternative, non-oppressive models of faith to share among Native Americans. Fortunately, in my own denomination's archives I came across 12 boxes of original journals and letters from a missionary named Evan Jones (1821-1871) and his Cherokee co-worker, Jesse Bushyhead. I found in this team, which later included Jones' son John, an understanding of how Jesus could be expressed contextually through Indian culture.

Over the past 25 years of culturally contextual ministry among our Indian people, my wife and I have applied many of the things we discovered. Regrettably, erroneous assumptions about our Indigenous cultures still exist today. Like the proverbial "ducks out of water," Native Christians captured by a Western worldview are against the use of any form of Native American cultural expressions of faith. On the other hand, those who reclaim a vision of Christ in our culture celebrate joy and homecoming.

Ministries like ours have suffered difficult persecution from all sides; bullets (both metaphorical and real) from the dominant culture and "arrows" from our own people. Fortunately, we have found collaboration and partnership with a larger group of Native North Americans known as NAIITS (North American Institute for Indigenous Theological Studies). We feel if Jesus cannot be expressed equally in and through every culture on earth, then we are presenting a foreign religion, not Jesus.

After centuries of tragedy, America's aboriginals have a gift to offer the West. As First Nations people learn to deconstruct the Western worldview and bring our own unique perspective to the table, we find stark differences between Indigenous and Western faith systems. The upshot being that a rigid Western worldview is essentially at odds with the shalom-kingdom teachings of Jesus and, the parallel construct of the harmony way found among Indigenous peoples.

Colonialism is, in part, about power and conformity to a set of beliefs. The gospel is about living out love and giving away power, especially among the poor and marginalized. The Spirit of God affirms our unique giftedness. The spirit of empire conforms us into a particular external image. The Western worldview left unchecked, may eventually destroy the earth. Helping others to see shalom through the lens of an Indigenous worldview will not only help heal our past, it can heal our planet.

PHOTO GALLERY
Native American Christianity: Through Bullets and Arrows to Peace
Download
Calling all HuffPost superfans!
Sign up for membership to become a founding member and help shape HuffPost's next chapter
Join HuffPost 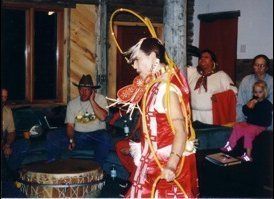