Native American students in Utah may be getting referred to law enforcement agencies before they even know how to read.

Fifty-five Native American students in kindergarten through sixth grade were referred to police officers during the 2011-2012 school year in Utah. By comparison, not a single white student in this age group received this action, even though the state educates significantly more white kids, according to a new report from the University of Utah's S.J. Quinney College of Law Public Policy Clinic.

Around the country, Native American students face disproportionate rates of suspension, expulsion and referrals to law enforcement, according to 2011-2012 data from the U.S. Department of Education Office for Civil Rights, the most recent school year available. These disparities are particularly acute in Utah, the new research reveals, even though Native students are only a small portion of the state's student population.

The report from the University of Utah looks at state-level data collected from the Office for Civil Rights, zeroing in on the disproportionate punishments Native American students face in school. Native American students in Utah are more likely than any other student group -- including all other students of color -- to get referred to police or arrested at school, and are 7 ½ times more likely to face expulsion than white students.

These severe punishments serve to push students away from school and help contribute to the so-called "school-to-prison" pipeline for Native students, the report states. Thirty-one percent of Native American students in Utah dropped out of high school in 2014, compared to a 15 percent state average. 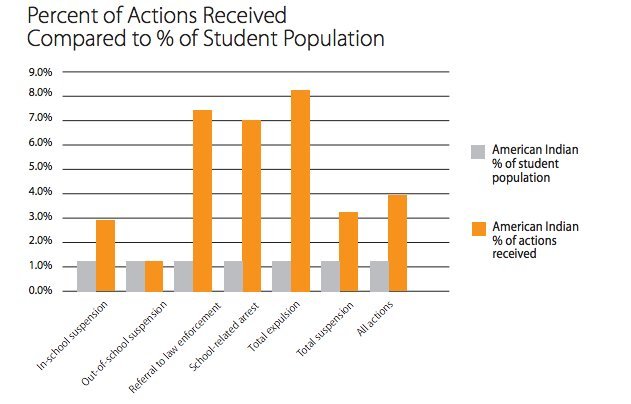 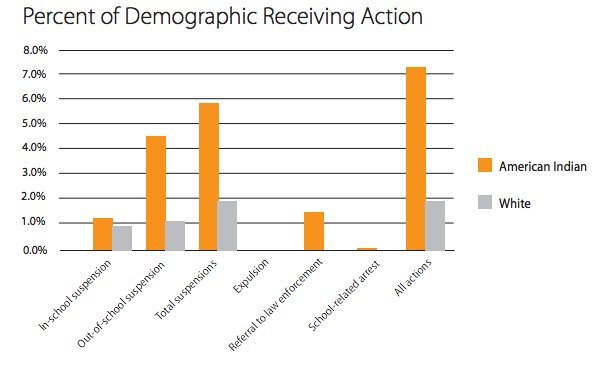 It's not clear what behaviors lead to Native American students' suspensions or expulsions, as such data is not collected in a standardized manner. However, information from one of the state's districts paints a picture of the types of circumstances that lead to extreme punishment.

In Utah's San Juan School District, two Native students in 2014 were referred to law enforcement after they went into the teachers lounge looking for a teacher. While in the lounge -- which was empty -- they took two bottles of Dr. Pepper from the refrigerator. After getting caught, the students were referred to law enforcement for their "theft," according to a log of the district's disciplinary actions sent to University of Utah researchers.

In another incident, "a student was huffing from a dust cleaner can and got dizzy and passed out in class. [Administrators] referred him to law enforcement because ... they said it was possession of a drug. There's ambiguity in terms of what could be considered a drug," researcher Vanessa Walsh told The Huffington Post.

Beyond disparities in discipline, Native American students around the country face a unique set of challenges. They have abnormally low graduation rates and face high rates of poverty.

"American Indians occupy a unique place in this country. They are classified by sociologists as among those 'involuntary minorities' who were coercively incorporated into American society. They are separated by culture, language, polity, and religion," the report said.

"The history of assimilation policies we had for so long, I have to think in some part it plays a role in the mindset of American Indians," Walsh told HuffPost. "We’ve had such a tortured relationship with this community."