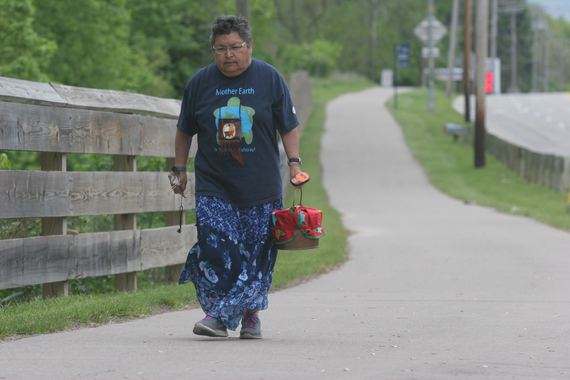 Walking through the city in the rain while carrying a copper bucket of water and an eagle feather was not how I had planned to celebrate Mother's Day.

Although I frequently think otherwise, however, my plans are usually not very important. Such was the case this year when my niiyawen'enh (godmother), Cleora White from the Lac Courte Oreilles Reservation in Wisconsin, called to inform me that the Water Walkers were passing by my community here in Cincinnati.

"Maybe you'd like to support them," she suggested in that Ojibwe woman way that is impossible to disobey.

I was recovering from a virus and resting in bed when she called. I was reminded of her phone calls to me during my college years when I lived the lush life on many nights. I hated her early morning phone calls then. My head would throb in response to her chipper voice.

"Get out of bed, you ol giiwashkwebii (drunk) squaw!" she would tease, "come over and feast with us!"

I would show up at her house, my eyes like two pee holes in the snow, as my dad would say, and she would put me to work. She mothered me when I needed it most in those early days. Somehow, she knew I still needed her gentle urging and reminder that I am an Anishinabikwe (Ojibwe woman) and I have certain responsibilities. The most important of those duties is to care for Nibi (the water).

The Ohio River Walk is the third Nibi Walk led by a group of Anishinabe grandmothers who pray for the water and raise awareness about the pollution that plagues this element that is essential to life. Sharon Day, Ojibwe, is leading this walk.

"Carrying the water in a ceremonious way every day creates transformation," she said.

She and others believe that this act of ceremony will change the way people view the water in a personal way.

Although my mom and my famous Auntie Pat, the strongest Ojibwe women in my life, have passed, I realized that Cleora's call was also their call to attend to an urgent matter -- the health of the Ohio River that flows less than one mile from my house. And so I was blessed to join them for a day, adding my small light to their sum of light, illuminating the desperate state of our waters and the need for action.

Like so many of us, I often choose to selectively ignore troubling facts like the health of the nibi that flows so close to my family's house. Rather than conduct ceremony here in my adopted home where the dirty Ohio flows, I return home to Wisconsin where the waterways are far more attractive.

The Ohio River is the most polluted river in America according to a recent report from the Environment America Research and Policy Center. The Elk River chemical spill in January 2014 made matters worse when Freedom Industries released 7,500 gallons of crude 4-methylcyclohexanemol upstream from the Ohio River in West Virginia. The chemical is a foam to wash coal and remove impurities that contribute to pollution when the coal is burned.

Use of tap water by 300,000 people living closer to the spill was banned for several days. Cincinnati Mayor John Cranley assured us that the city shut down river intake valves for our drinking water until the chemicals had passed our area. Although the chemical plume has officially passed our way, it turns out not much is known about the impact of 4-methylcyclohexanemol on water life or humans. According to Science Daily, however, folks upstream are still afraid to drink their now licorice-scented water.

The Ohio River has been tough for me to ignore. I often wince involuntarily when I pass its befouled water and look away with a pang of guilt. I dismiss its obvious pain to the universal disrespect Western man seems to have for the environment; to soothe myself I calculate the days remaining until we head north for ceremony, to a place where I can express my love for the land and the water.

On this Mother's Day, however, I learned that the Ojibwe women in my life, past and present, have other plans. Clearly, my responsibility as an Ojibwe woman extends to wherever the Creator has placed me. The water, regardless of its appearance, requires my love and prayers. As I walked along my short stints of the ceremony, I was amazed at the genius of our traditional culture that embeds such profound lessons in simple actions. By immersing us in an act of constant forward motion, we are reminded of our participation in the unstoppable flow that consumes even our death. As I grow older, I find this relentless fact more than a little frightening. Ceremony, however, connects me in a loving manner to that forward motion and reminds me I have a role to play if I choose to accept it in a humble way.

Today I made a little trek down to the river below my home. I walked to its edge where its muddy, gouged and twisted banks resemble a landfill. The tall trees nearby were dressed in plastic grocery bags, rusted muffler pipes, and old shoes. I prayed and put my asema (tobacco) into this lonely, needy nibi, and I felt blessed.