Looking around your neighborhood, you probably see front and backyards dominated by turfgrass and ornamental plants that are not native to the region. Native species are plants and animals present within a given area prior to European contact. Non-native (or exotic) plants or animals are defined as those species that were not present before European contact. The impact of urban landscaping on biodiversity may warrant altering conventional or "exotic" urban landscaping to emphasize native landscaping. Biodiversity refers to the variety of life and its processes. Biodiversity includes species diversity, habitat diversity, and genetic diversity. 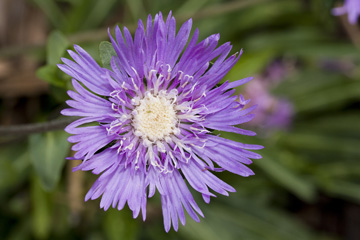 The conventional approach of landscaping with turf and ornamentals affects biodiversity in two ways: 1) it limits the diversity of native species in urban areas dominated by turf and ornamentals, and 2) it can affect surrounding natural environments, altering habitats in ways that exclude native plants and animals.

Looking beyond the boundaries of cities, the use of turf and some ornamental plants can negatively affect biodiversity of surrounding habitat. Non-native species that invade and impact natural areas are called "invasive exotics." Most invasive exotic plants in the United States were originally introduced as ornamentals in urban areas and then escaped and became established in surrounding natural areas. We are not saying that all non-native plants are necessarily bad, but today's non-listed exotic could become tomorrow's invasive species. Further, the maintenance of lawns and exotic plants with an array of insecticides, fertilizers, and herbicides can also affect biodiversity. With insecticides and herbicides, most people use these chemicals to keep other plants out and to keep turfgrass and ornamentals healthy and alive. The end result is usually the eradication of native plants and insects. For example, many insecticides are not specific to the pest insect and kill many of our native pollinators such as bees, beetles, wasps, and butterflies.

The Precautionary Principle: Some will argue that evidence of impacts by exotics is not conclusive and exceptions occur. Further, they argue that if homeowners and the landscaping industry managed lawns and ornamentals appropriately, we could minimize our impact on natural environments. However, the risk is great, and thus the precautionary principle may be most appropriate here. Essentially the precautionary principle states that "where there are threats of serious or irreversible damage, the absence of full scientific certainty should not be used as a reason for postponing measures to prevent environmental degradation." Maybe we should look at each ornamental plant as a "risk" and overall, reduce the number of non-native plants installed in our own yards.

Certainly, non-natives do have their place (e.g., vegetable gardens, turfgrass for recreation, and exotic flowers for show), but the dominance of exotic vegetation is at the expense of our natural heritage. Alternatives do exist and people are increasingly interested in sustainable options. Become the first in your neighborhood to switch your landscaping practices and incorporate more natives into the yard!

Portions of this blog were first published as an article in the Journal of Extension: "Native Landscaping vs. Exotic Landscaping: What Should We Recommend?"