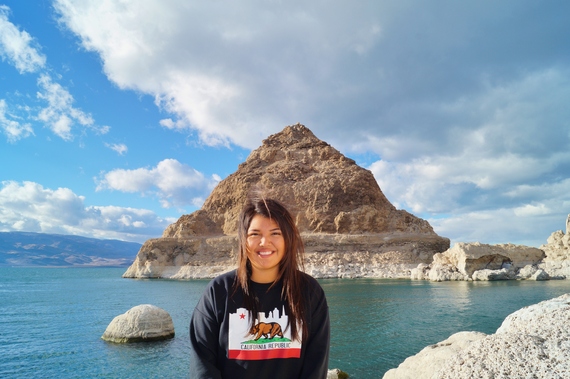 Autumn Harry has spent her twenty three years living on the Paiute reservation in northern Nevada. She will spend her whole life there if she has her way. Or else, if her work as a fish culturist or the pursuit of a Master's degree takes her elsewhere, she hopes to always live with and among Native Americans on a reservation.

"I'm studying undergraduate environmentalism. I work part-time with a fishery program which tries to maintain the trout population. Raise them for a year or so, and then throw them into the lake. Oh, it's so beautiful! " she exclaims.

Autumn explains that she is bewitched by the beauty and expanse of Pyramid Lake. She is taking a walk along the beach as we talk. Pyramid Lake Valley, in the Great Basin, has been the ancestral home of the Paiute for thousands of years. There is no man-made pyramid. Yet tufa formations have created large pyramidal shapes along the shores.

"It's sunset. No wind - so beautiful. And the pyramid. It's shining!" she says.

Autumn's enthusiasm seeps through as she speaks of her work monitoring water quality and saving the Cui-ui, the cultural fish of the Paiute, a tribe known as "the Cui-ui eaters." In the early 1900's, a dam built near the reservation diverted water, which resulted in the lake level diminishing 50 feet. The fish population, such as the Cutthroat trout and Cui-ui, were unable to spawn and became endangered species. Today both species have returned.

Autumn's voice sparkles with hope for nature and all life.

That might be unremarkable, in a young person living close to home and nature, except that Autumn is a member of a troubled generation.

A 2014 Washington Post article says, "A toxic collection of pathologies -poverty, unemployment, domestic violence, sexual assault, alcoholism, and drug addiction - has seeped into the lives of young people among the nation's 566 tribes." The result is a crisis number of youth committing suicide. Officials have summed up the tragedy as "an outcome of pervasive despair," the article says.

"It's depression. It's trauma from colonization. A lot has to do with a Western education system - and the result of youth not learning about their Native language, or cultural values. I was one of those kids who connected with my culture early. I work with other youth on learning our Native language," Autumn says.

She estimates as few as 10 elders still speak their native tongue fluently.

Two weeks ago, Autumn received a call from an organizer with PLAN (Progressive Leadership Alliance of Nevada) asking her to join a summit in Reno, on Saturday Feb. 13th that looks at how to reach real solutions for real people who are struggling in this economy. Presidential candidate Bernie Sanders and Sen. Corey Booker, representing candidate Hillary Clinton, will speak at the "Real Solutions for Real People," which is also hosted by the Center for Community Change.

Recognizing Autumn's work in her community, PLAN organizers invited her to represent her tribe. She will have the opportunity to speak -- and a chance to ask the political leaders one question.

The pressure of asking one question daunts her. "When I ask Sanders a question, I'm not just going to focus on suicide.

"I'm committed to staying here. It's beautiful. We have a lot of abundant resources. There are things that have to be improved. Our education, our healthcare.

"Different industries come on our land, trying to extract our natural resources through mining.

"Rates of diabetes are too high -- we need to go back to traditional medicine and educate our residents on how our people used to live and go back to eating our traditional foods.

"We don't have technological access on the reservation which we need to do the basic functions of everyday living. Even as a college student. I don't have Internet access at home, and if I want to use a computer I have to go forty miles to use it."

And given this, how can Autumn choose one question from among a labyrinth of points that in their own way strangle Native communities? She will focus her question on how reinvestment needs to happen in all corners of the state, the small town and communities that need the most help, especially in Indian Country.

The Nevada caucus will be held on February 20th. Autumn at this point remains "undecided" and says this is another hardship among Native Americans - political exclusion by neglect.

"It's hard for Native Americans to make a decision because most of the conversation hasn't been centered on Native issues. I feel marginalized."

Autumn's words echo with a whole history of Native American marginalization when she muses about Native issues and investing in Native communities. .

By now the sunset has overwhelmed Autumn's attention. Pyramid Lake's sheer expanse returns her to the theme of the natural beauty that connects her to feelings of place, ancestry, and hope. "It's something about living here. And knowing that our ancestors lived here. When we sustain those traditions, we're proud of who we are. And they'll be less teen suicide."

The thought of such a future for young people in her community makes Autumn happy. When I ask her if she would trade it for anything, "No, I wouldn't trade it for a million dollars."

Darryl Lorenzo Wellington is a writer for the Center for Community Change.