On Friday, April 25, 2014, the three young men dubbed the NATO 3 -- Brent Betterly, Jared Chase and Brian Jacob Church -- received sentences ranging from five-to-eight years for the offenses of "mob action" and "possession of an incendiary device with intent to commit arson." This sentencing comes two months after the state's attempt to bring terrorism charges unraveled. 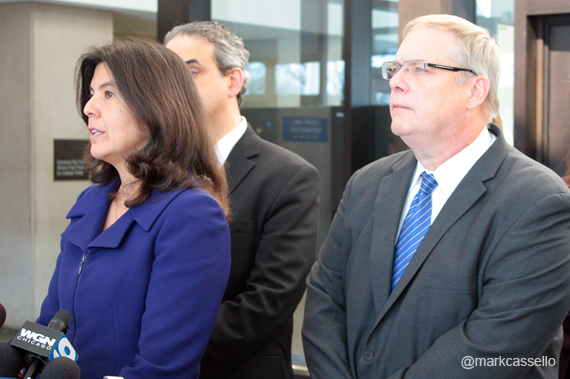 Regardless, the state continued using rhetoric that left the defendants steeped in the murky stench of would-be-terrorist suspicion. Invoking the looming specters of the Boston Marathon Bombing and 9/11, they intimated that the defendants had -- and have -- a proclivity for violence. Judge Thaddeus Wilson engaged in a subtle semantic bait-and-switch stating that "It might not be terrorism, but it is terrorizing." Assistant State's Attorney Jack Blakey suggested that the Chicago Police had prevented an "attack like the Boston Bombing" and called the defendants "a disaster waiting to happen." State's Attorney Alvarez echoed Blakey's sentiments: "We're very happy that we prevented more violence and very happy that we prevented people from getting injured -- particularly police officers." Alvarez continued, "We're not going to wait for someone to get hit with a Molotov cocktail or wait for some building to destroyed. Why should we?"

Alvarez's ominous declaration -- "We're not going to wait..." -- should sound eerily familiar. It is a rhetorical riff on Condeleeza Rice's 2002 statement about Saddam Hussein's Iraq: "We don't want the smoking gun to be a mushroom cloud." Rice's statement helped build public support for the invasion of Iraq, and Alvarez's remark helps build public support for the type of questionable preemptive policing practices exposed in the trial of the NATO 3.

Chicago has reinvigorated a law enforcement culture that promotes the targeting and surveillance of law-abiding citizens who gather to express concern about public policy.

In the lead up to the NATO demonstrations, terrorism fears placed the city on high alert. Mark Brown of the Sun-Times reported:

Chicago police deployed members of a 17-person undercover unit over a several month period in the spring of 2012 while trolling for anarchists planning to cause trouble at the NATO summit.

They documented license plate numbers at a punk rock concert, staked out a coffee shop in Rogers Park (Heartland Cafe), surveiled a record store in the Ukranian Village (Permanent Records -- enjoy the irony here), and attended a lecture at Occupy Chicago headquarters near Pilsen.

However, the targets of police undercover operations at times appeared to have little to do with anarchism or potential terrorism. For example, the undercover Chicago Police Officers: Mehmet Uygun (a.k.a. "Mo" or "Turk") and Nadia Chikko (a.k.a. "Gloves") infiltrated the Mental Health Movement in April 2012 as community residents trying to stave off closure of the Woodlawn Adult Health Center. The Mental Health Movement seemed to be a lone voice decrying Mayor Emanuel's now successful closure of six public health centers.

At the time, Chicago had a total of 12 clinics that provided free and low-cost mental and physical health care to the city's most vulnerable citizens in some of its neighborhoods most afflicted by crime, poverty and untreated mental illness. The clinic in Woodlawn, like its counterparts, offered a range of priceless services to the community including treatment for substance abuse; counseling for victims of rape, domestic and gun violence; and basic medical care. It was also a safe place for mentally ill individuals to stay during the day while family members worked. 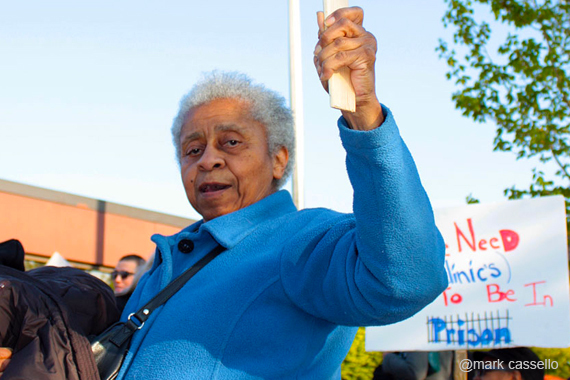 The community gathered at the Woodlawn Clinic on April 12, 2012 in a last-ditch attempt to prevent its closing: undercover officers Uygun and Chikko joined a coalition of mental health workers, consumers and advocates who attempted to occupy the facility. They even allowed themselves to be arrested alongside some of the elderly and infirm clients desperately trying to save the clinic.

In a similar incident a year later, an undercover officer infiltrated a rally against public school closures at Daley Plaza on March 27, 2013 by posing as a volunteer medic. Citizens, students and teachers gathered downtown to decry the mayor's plan to close over 50 public schools -- the largest mass school closing in American history. Akin to the closing of public mental health clinics, the mayor aimed to close public schools and replace them with private, for-profit charter schools. This unprecedented attack on public education enraged many teachers, students and residents alike whose careers, educations and communities were threatened.

It was discovered that an undercover officer calling himself "Danny Edwards" had infiltrated Chicago Action Medical (CAM), a volunteer group that is onhand at political demonstrations to provide emergency medical treatment. Danny's initial infiltration of the group began one year before at an introductory training of street medics in March 2012.

Surveillance culture has also made its way into university policing as well. In January 2013, nearly a year after the NATO demonstrations, it was discovered that University of Chicago police infiltrated a gathering of advocates for the construction of a Level 1 trauma center on the city's violence-plagued South Side.

The call for a Level 1 trauma garnered national attention in 2010 after the tragic death of 18-year-old Damian Turner. As Don Terry of the New York Times recounted:

[Turner was critically wounded] in a drive-by shooting only four blocks from one of the best hospitals in the world, the University of Chicago Medical Center in Hyde Park. But rather than rush the gravely wounded teenager there, Chicago Fire Department paramedics were required to drive him to the nearest Level 1 trauma center, which was more than nine miles across the city at Northwestern Memorial Hospital on the northern edge of downtown. Mr. Turner was pronounced dead less than 90 minutes after the bullet ripped into his back.

This issue gained momentum in January 2013 after the University of Chicago announced plans to construct a $700 million outpatient facility. Critics of the project argued that the hospital neglected the needs of South Side residents who are often victims of gun violence. The Maroon, the student newspaper of the University of Chicago, published photos documenting the presence of an undercover officer participating in the demonstration. The administration responded: "The behavior as described is antithetical to the University's values, and we will not tolerate it."

Unlike the University of Chicago, no one from the city or the state has stepped forward to denounce the surveillance of peaceful, law-abiding citizens. In fact, when questioned about it directly following the NATO 3 verdict, State's Attorney Alvarez stated: "I think what's clear here -- The police were doing their job." Similarly, Judge Thaddeus Wilson "commended" the work of the undercover officers in his sentencing remarks at the trial of the NATO 3. Indeed, Chicago police do their job very well. 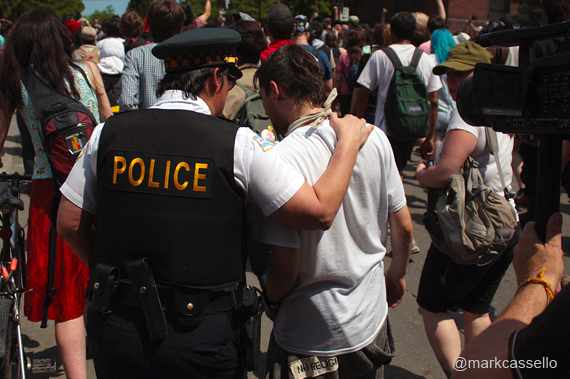 However, I suspect many Chicagoans would agree that the job of law enforcement should not be to cultivate would-be terrorists, to spy on the mentally ill, to surveil distressed middle schoolers or to shadow health care advocates while so much actual crime happens.

A 1982 consent decree placed restrictions on police spying in Chicago following a string of abuses in the 1960s and 1970s. However, following 9/11, the city argued that, "its efforts to investigate gangs, terrorism and demonstrations had been hampered by requirements it first must have a reasonable suspicion of criminal activity." The consent decree was struck down in 2001, and I fear we are beginning to see the results. The cases described above illustrate the consequences of eliminating "reasonable suspicion of criminal activity." Today, everyone is suspect; everyone is susceptible.

Judge Thaddeus Wilson is correct: Seeing a Molotov cocktail is terrorizing. Other occurrences in Chicago terrorize as well: Realizing your schizophrenic sibling has no safe place to stay while you work because your neighborhood mental health clinic has been closed is terrorizing. Knowing your child has to traverse competing gang territory because his local public school has been dismantled is terrorizing. Being shot and hoping to survive a nine-mile ride across Chicago's pothole riddled streets to reach a Level 1 trauma center is terrorizing.

Being afraid to speak out against these issues for fear you may be branded a terrorist is terrorizing.