While the carbon industries and their PR firms continue to spread disinformation attempting to discredit climate science on global heating, the world's military leaders and strategists are preparing for the certain conflicts that will arise as the environment changes due to human activity. The speed at which the planet is heating and the rate at which feedback mechanisms are contributing to warming are of growing concern especially in countries facing critical resource depletion in the near future.

There were many aspects of the growing Climate Crisis being addressed in Copenhagen outside of the Bella center and the COP15 negotiations. One particularly informative event was Climate Change and the Military. The luncheon was chaired by Tom Spencer, Vice Chairman, Institute for Environmental Security and Project Coordinator, Climate Change & the Military and the speakers included; Brigadier General (ret) Wendell Chris King, Dean of Academics, U.S. Army Command and General Staff College, Major General (ret) Muniruzzaman, President, Bangladesh Institute for Peace and Security Studies, Alexandros Papaioannou, Policy Adviser, Policy Planning Unit, NATO, Nick Mabey, CEO and Founding Director, E3G, Cleo Paskal, Associate Fellow, Chatham House. Despite the claims of the flat earth society to the contrary, the reality of human driven climate change is front and center for international military contingency planning. That such a distinguished panel of military leaders and strategists assembled in Copenhagen is indicative of how serious the threats posed by climate and environmental changes to the security and safety of human civilization actually are.

Several areas were identified as being hot spots in the near term. Africa has already seen conflicts arise and be exacerbated by climate changes in participation patterns and subsequent drought, famine, flood, and migration. The 1.3 billion people who live downstream in Asia and China will be severely impacted by the accelerating melting of glaciers in the Himalayas; specifically those countries that rely on the glaciers in the Himalayas for their water are of principal concern. A number of the most important rivers in the world rely on the Himalayan glaciers as their primary water source and over a billion people depend on these rivers to survive. There was broad consensus that the national interests of both the developed and developing worlds would all be served by greater attention to these threats and international cooperation in prevention and adaptation as climate change accelerates. Not one of the panelists present questioned the scientific conclusions of the Intergovernmental Panel on Climate Change (IPCC) or the world's leading climatologists that human activity is rapidly changing what has been a stable and predictable global environment for many thousands of years.

The reality of climate change will require fundamental changes in how international relations are conducted, and will alter much of the focus of international drcurity policy. It will change strategic interests, alliances, borders, threats, economic relationships, comparative advantages and the nature of international co-operation, and will help determine the continued legitimacy of the UN in the eyes of much of the world. Climate change geo-politics will extend far outside the environmental sphere, and will link old problems in new ways. managing the complexity of our collective climate security will become an ever more important part of foreign policy.

Cleo Paskal in her authoritative new book on these issues, Global Warring, How Environmental, Economic, and Political Crises Will Redraw the World Map, uses historlcal examples and modern climate science to draw parallels with 21st century geopolitics which is giving rise to climatepolitics. Paskal's extensive examination points to the uncomfortable conclusion that every country and continent will be seriously impacted by environmental changes this century. The idea that somehow the US and the rest of the developed world will be shielded from the impacts of global heating is patently false. 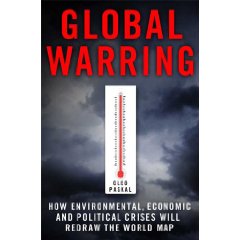 In an interview in Copenhagen, Paskal offered further insight into the strategic considerations of a changing global environment driven by anthropogenic climate change.

Why have we not heard more about the security implications of climate change?

I think primarily because the assumption has been this is the developing world's problem. These problems have been associated more with human suffering in the developing world -- which is a frequency that has been tuned down in a lot of media coverage because of over-saturation. You get starvation in Ethiopia and it's very tragic but we don't think it affects us in the developed world directly -- it very well may radicalize the population and we may end up with terrorists on our streets. But there has been a disassociation with human suffering in the developing world and how that will effect us. So when you start to look at the actual locations what you see is that we will be hit very badly in the developed world as well -- that's a new assessment and there is a lot of resistance to that assessment.

In the short and long term, what do you think are the necessary steps to begin to address those issues as well as the myriad issues that are already being discussed?

And who is responsible for that?

Everyone who makes a decision that is someway related to the physical environment needs to at least take responsibility for incorporating those changes into their assessment. So it could be insurance companies who decide what they are going to insure to construction companies who decide what materials they are building with. It could be urban planners who are deciding a site for a city whether or not they will actually have a water supply. Historically, all of those people have only looked at the environmental past to make their decisions. But the past is no more a way of saying what will happen in the future. If you are in an area now and it hasn't flooded for fifty years that doesn't mean it is not going to flood in five years. We need to start incorporating future climate change assessments into any decision that has to do with the physical environment.

You are an American based in London. Is that by choice or is it because that is where you can pursue your area of interest?

For eight years there was not a lot of attention paid to this area. So I found much more willingness to look at these topics in London than I did in Washington. Now the atmosphere has changed quite substantially in the US. The CIA has instituted a climate change and security program -- various branches of the military are looking at climate change and security, but primarily they are looking at it from the context of a developing world security problem not as a domestic security problem.

You seem to be quit clear that the concerns should be domestic as well as international.

In terms of international treaties and borders, how is that impacted by sea level rise?

In the same way our physical infrastructure isn't taking into account environmental change, our legal infrastructure is not designed to take into account environmental change. A lot of our laws, treaties and agreements assume the environment is a constant, but it is becoming a variable. So, for example, the UN convention on the law of the sea says that you get a 200 mile exclusive economic zone off of your coastline. The assumption is that the coastline won't change. But if the coastline floods and retreats, for example with the Everglades -- the Everglades are already swamped and the Keys are already sandbars -- not a lot of sea level rise will flood them and your coastline for Florida would potentially move inland. That means your exclusive economic zone if you are using an equidistant border would also retreat along with it legally. Obviously that is not going to happen -- obviously politically we are not going to cede the entrance to the Gulf of Mexico to Cuba. But it shows that when the law fails you end up in a very political area and we are entering times of such conflict already we do not need artificially created security vulnerabilities. Our laws are creating completely unnecessary new problems because they don't incorporate environmental change.

in the short-term what can be done specifically to address those issues?

I think that there should be clause inserted into the UN convention of the law of the sea that freezes all borders as per satellite imagery in the year 2000....

To set a baseline...

Yes to set a baseline and then you stick with it. In many many areas there are relatively easy fixes but if we don't even acknowledge the problem we can't fix it before it becomes an even bigger problem.