NATO's Heads of State and Government met in Chicago on May 20 and 21. A few weeks earlier, April 23-25, the Nobel Peace Laureates gathered there for their annual summit. A city that could carry the messages of both of these gatherings was aptly described by Carl Sandburg when he called Chicago "the City of the Big Shoulders." 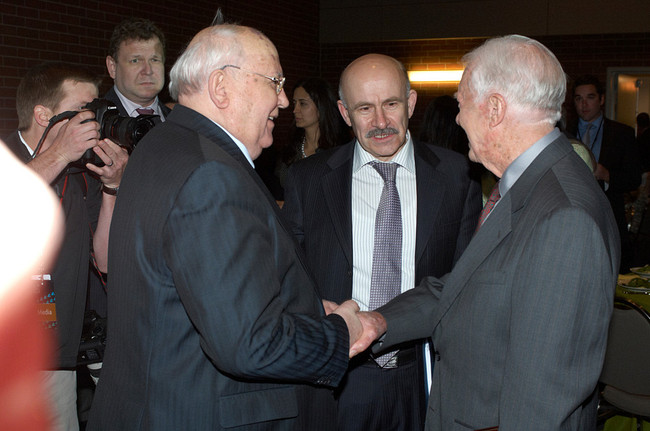 The NATO leaders provided no new approaches to security and essentially reaffirmed military commitments arising from the Cold War, including the continued presence of 180 tactical nuclear weapons in Europe. The stated reason for these weapons is to be the "supreme guarantee of the security" of the NATO member states. Such a nuclear deterrence theory approach could become contagious. If the most expensive and powerful military alliance in human history needs nuclear weapons for their collective security, then why would weapons of mass destruction not be of benefit to others in more dangerous neighborhoods? The Nobel Peace Laureates provided a different approach. One can only imagine how much more successful the NATO gathering would have been had its members attended April's summit.

Sessions of the Nobel Peace Laureates were broadcast in thousands of schools and the laureates even went to local high schools to share their inspiring experiences. The summit theme, largely focused on the next generation, was "Speak Up, Speak Out, For Freedom and Rights." 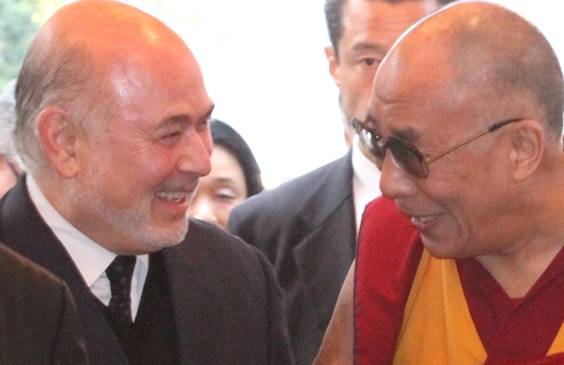 Former Presidents Jimmy Carter, Mikhail Gorbachev, Lech Walesa and Willem de Klerk discussed how the practical and the good can converge successfully in practice and create powerful social change. Thousand of students were moved by the passionate moral insights of the Dalai Lama and Jody Williams and the courage of Shirin Ebadi, the Iranian human rights activist attorney, as well as the work of organizations which represent millions of people the world over committed to peace and non-violence: International Peace Bureau, American Friends Service Committee, International Committee of the Red Cross, Amnesty International, International Physicians for the Prevention of Nuclear War, PUGWASH Conferences, International Campaign to Ban Landmines, United Nations/Department of Economic and Social Affairs, Intergovernmental Panel on Climate Change, Médecins Sans Frontières, United Nations Children's Fund, The Office of the United Nations High Commissioner for Refugees, International Labour Organization.

The summits were created by Gorbachev and the then-mayor of Rome, Walter Veltroni, who hosted the first few summits. This dynamic yearly gathering has since moved to other cities, each with a particular theme. The last summit was in Hiroshima, where the Peace Prize winners called for practical steps toward the abolition of nuclear weapons. Before that they gathered in Berlin, calling for breaking down the walls of poverty and prejudice, and in Paris, where human rights in all its dimensions was highlighted. This year was hosted by Mayor Rahm Emanuel, former White House Chief of Staff and current leader of Chicago. Speakers included President Obama, via video, and former President Bill Clinton, who shared his thoughts on human unity on the opening evening event. The principal theme this year was to honor the activism of youth and the spirit of public engagement, so very much at the heart of American democracy. Kerry Kennedy, the late Sen. Robert Kennedy's daughter, helped to bring in thousands of young participants, demonstrating that the Kennedy spirit of public service remains very much alive. 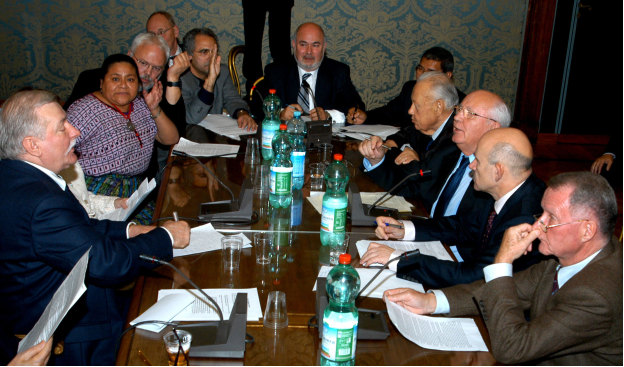 The Charter for a World Without Violence, adopted at one of the Laureates' previous summits, and circulated in Chicago, begins stating: "Violence is a preventable disease." In fact, Chrysler has now launched an advertising campaign to advance the Charter. Can peace sell cars? Maybe. Should we be snide when capitalism and celebrity promote goodness? Take a look for yourself and decide.

Cynicism, injustice, arrogance, and ignorance are the precursors of violence and the presentations were consistent in proposing remedies for these ailments. This was no time for apathy. Every speaker had demonstrated in their life work courage, optimism, faith, conviction, and success -- proof that individuals with moral courage can change the world for the better.

President Walesa's call, on behalf of all the laureates, for the release of Nobel Peace Prize winner, Chinese writer Liu Xiaobo, imprisoned for exercising his human right to free speech resonated deeply with participating laureates and organizations, many whom as activists have similarly taken courageous stands, spoken truth to power and faced oppression.

The laureates demonstrated their belief in individual initiative in giving their Peace Award to Sean Penn for his work in rebuilding Haiti. We urge you to read his acceptance speech. 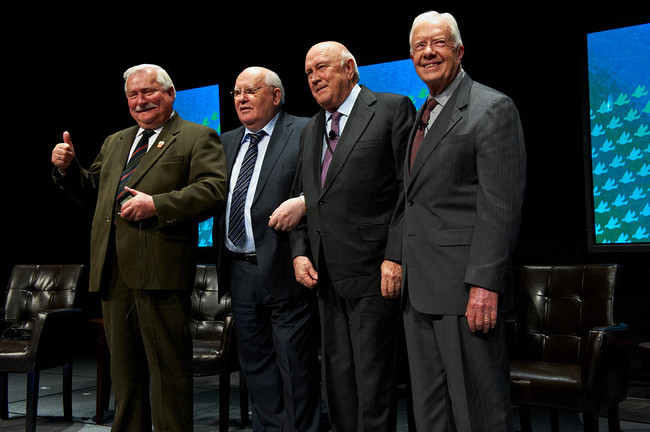 As members of the summit's drafting group we had the privilege of working closely with the laureates and want to share how moved we were by their authenticity, humility, and profound passion to make a world a place where justice and peace are prominent, not only in the affairs of states but also in everyday life.

Here are a few examples: The Dalai Lama and President Carter emphasized the irreducible value of good qualities such as love, compassion, justice, and humility in our personal lives and in the actions of governments. Muhammad Yunus, the creator of the micro credit Grameen Bank, explained how we could put poverty in a museum. Dr. Rajendra Pachauri, head of the U.N. Intergovernmental Panel on Climate Change highlighted how we simply must come to greater levels of human cooperation and responsibility to prevent our energy consumption patterns from irreversibly harming the planet's climate. President Gorbachev warned of the dangers of militaristic approaches to security and urged greater progress on the elimination of nuclear weapons and general arms reduction. Jody Williams, a leader in the campaign to abolish land mines, emphasized how every person with a commitment to serve the common good could make an enormous difference.

We had the privilege of listening carefully to the collective concerns of these inspiring men and women and helping as best as we could to convey their messages in a statement less than a page long. It did not do justice to many very important themes such as the need to end violence against women, or the need for sustainable livelihoods, or the importance of constitutional governance and the rule of law. But, we believe that the final statement is well worth wide circulation and strongly urge you to share it far and wide, especially amongst young people. We also urge you to follow the Laureates' Appeal and ask the Four Questions.

APPEAL TO THE YOUTH OF THE WORLD

As Nobel Peace Laureates and Laureate organizations we realize that if the commitment to peace and human rights is not passed from one generation to the next our achievements will be short lived. For this reason we applaud the youth the world over who are standing up and speaking out in protest against injustice and inequality and defending the right to peace, social justice and a sustainable future.

We are concerned that old threats to peace are persisting and new ones emerging. We therefore urge young people to organize for peace and learn to prevent and resolve conflicts peacefully. At a time when militarism continues to corrupt the minds of politicians and poison international relations, when a new arms race is unfolding, this must be a key priority. As Nobel Laureate Martin Luther King, Jr. said, "those who love peace must learn to organize as effectively as those who love war."

Substantial reductions of world military expenditures could eliminate the crushing poverty whereby nearly one third of humanity lives in insufferable conditions. Excessive military expenditures not only represent a theft from those who are hungry but are also an ineffective means of obtaining security.

Equally unacceptable is violence against nature that ruins the environment upon which civilization depends.All the world's religions and peoples share similar basic values, such as peace, compassion, love, justice, service toward others, and the alleviation of suffering. Political leaders must recognize our common humanity through deeds rather than mere words.

We urge young people to question leaders about what they are doing to address the main challenges that face the world today:

What are you doing for the abolition of nuclear arms and other indiscriminate weapons and for reduction of military spending?

What are you doing to bridge the divide between wealth and crushing poverty?

What are you doing to save our planet from environmental disaster?

What are you doing to protect and promote human rights and equality between women and men?

We offer the world's youth our support and our experience as they pursue a better future. We urge them to achieve change through peaceful and moral means. We need your enthusiasm and we want you to join us in our continued quest for peace and justice.

Videos of the presentations: http://www.nobelsummitchicago.org/resources/video/