In a report based on investigations at bombing sites during and after the conflict, the New York-based HRW said NATO strikes killed 20 women and 24 children. It called on the alliance to compensate civilian victims and investigate attacks that may have been unlawful.

"Attacks are allowed only on military targets, and serious questions remain in some incidents about what exactly NATO forces were striking," Fred Abrahams, special adviser at HRW, said in a statement.

The report claims to be the most extensive investigation to date of civilian casualties from NATO's air campaign and presents a higher death toll estimate than a March paper by Amnesty International which documented 55 civilian deaths, including 16 children and 14 women.

NATO considers its Libya operation highly successful, illustrating the allies' ability to work well together in a limited campaign. NATO carried out some 26,000 sorties including some 9,600 strike missions and destroyed about 5,900 targets before operations ended on Oct. 31.

The alliance said the campaign had been conducted with "unprecedented care and precision and to a standard exceeding that required by international humanitarian law".

"NATO did everything possible to minimise risks to civilians, but in a complex military campaign, that risk can never be zero," said NATO spokeswoman Oana Lungescu in a statement.

"We deeply regret any instance of civilian casualties for which NATO may have been responsible."

HRW acknowledged that NATO had taken care to minimise civilian casualties and added that countries such as Russia that had made claims of large-scale civilian deaths did so "to score political points".

But Abrahams, principal author of the report, said the care NATO took during the campaign was "undermined by its refusal to examine the dozens of civilian deaths."

Concerns about civilian deaths in Libya could hamper NATO's ability to carry out future operations outside the territory of its members, in North America and Europe.

Although Russia co-sponsored the U.N. resolution authorising intervention in Libya, it later said NATO had "grossly violated" its mandate. This was a factor earlier this year when Russia opposed a U.N. resolution calling for action to stop the violence in Syria.

HRW highlighted an attack on the village of Majer, 160 km (100 miles) east of Tripoli on Aug. 8, when NATO air strikes on two family compounds killed 34 civilians and wounded more than 30.

HRW said NATO had told it that the Majer compounds were a "staging base and military accommodation" for Gaddafi forces, but had not provided specific information to support that claim.

"During four visits to Majer, including one the day after the attack, the only possible evidence of a military presence found by Human Rights Watch was a single military-style shirt - common clothing for many Libyans - in the rubble of one of the three destroyed houses," it said.

NATO said it had now looked into each credible allegation of harm to civilians and confirmed that the targets struck "were legitimate military targets, selected in a manner consistent with the U.N. mandate". (Reporting by Sebastian Moffett; Editing by Robin Pomeroy) 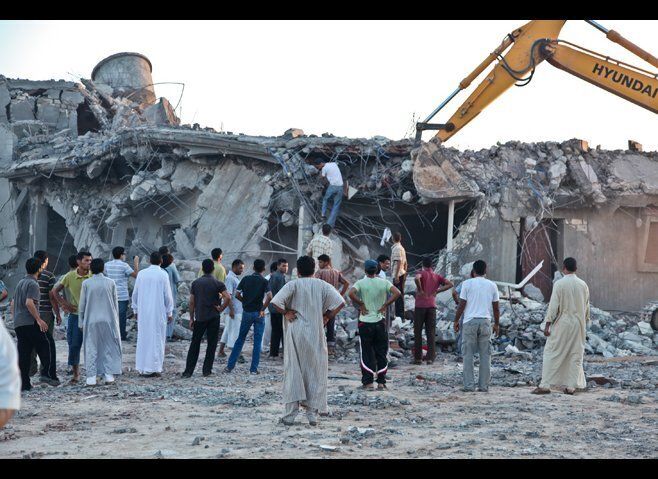 1 / 9
Relatives and neighbors search for survivors in the rubble of the Gafez family home in Majer on August 9, 2011, one day after NATO strikes on this and another compound killed 34 people and wounded more than 30.
Sidney Kwiram/Human Rights Watch