Lawyers representing activists preparing to rally against the NATO summit this weekend say that Chicago police raided the activists' home and arrested nine people late Wednesday -- without a warrant.

According to the Chicago Tribune, lawyers allege that Chicago police entered the home in the city's Bridgeport neighborhood and detained the activists though there was "absolutely no evidence of wrongdoing" on their part.

The arrestees were held at an undisclosed location for nearly 24 hours, the attorneys say, the Chicago Sun-Times reports, before the team was able to track them down to a police building near Kedzie and Fillmore on the city's West Side.

But prior to that, Chicago police refused to acknowledge the incident. Chicago Police Superintendent Garry McCarthy said Thursday that there was an "inquiry" into the incident that they were looking into -- but declined to comment further, NBC Chicago reports.

"It's not OK that police come in, break down a door without a warrant, arrest people and take them away and not indicate where they’re being held," the National Lawyers Guild' Kris Hermes told CBS Chicago. The group issued a statement on the incident.

In a statement released Friday, Occupy Chicago said that 11 people were arrested during the Wednesday night incident, four of which have been released without charges.

A group of about 60 demonstrators angered by the apparent raid took to the streets of the city's North Side on Thursday evening in an impromptu march, ABC Chicago reports.

"I could not be more disgusted, enraged, terrified, by and generally totally disappointed with the city of Chicago," William Vassilakis, who leases the apartment that police entered Wednesday, told ABC.

Zoe Sigman, an activist who lives in the building, denied that anything illegal was going on in the apartment where out-of-town anti-NATO protesters had been staying for the previous two weeks, the Tribune reports.

Police say the arrestees were making Molotov cocktails in the home, while the protesters' lawyers say the individuals only had beer-brewing materials, according to the Tribune.

A bond hearing for those arrested Wednesday is scheduled for noon Friday, the Associated Press reports.

Meanwhile, anti-NATO protests -- which have been largely peaceful with only about a dozen arrests reported to date -- are expected to ramp up with a large rally organized by National Nurses United Friday. The rally is set to begin at noon at Daley Plaza in the city's Loop.

While President Obama is not due to arrive in Chicago for the summit until Saturday, other world dignitaries began arriving in the city Thursday.

Catch a battle gear-clad federal agent near your go-to Starbucks spot in the Loop? Overhear someone chattering about what "they [said] back in '68?" Send us your NATO-related tips and comments to chicago@huffingtonpost.com, upload a photo below or tweet your news to #natochicago. Follow other NATO summit headlines here.

Check out photos of pre-NATO protests and other pre-summit happenings in Chicago: 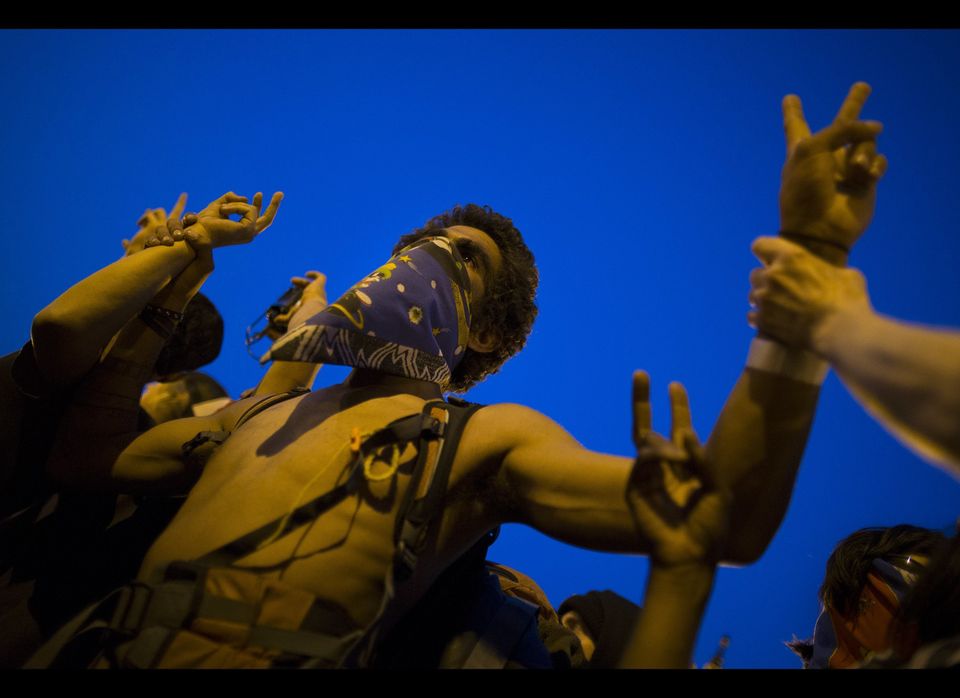 1 / 90
An anti-NATO protestor flashes peace signs during a march, Saturday, May 19, 2012, in Chicago. On Sunday, the start of the two-day NATO summit, thousands of protesters are expected to march to the McCormick Place convention center, where NATO delegates will be meeting. (AP Photo/John Minchillo)
AP